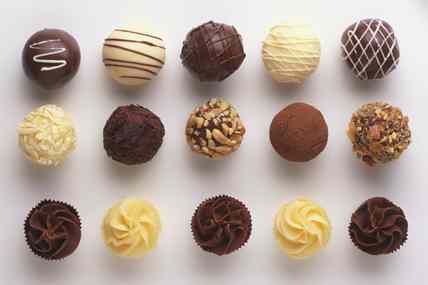 As a consequence of the slowdown in the growth rate of China’s economy, the ‘new normal’, consumers have eased their demand for some FMCG categories. Chocolate has been one of the impacted categories and has seen a softening since 2015. This category has also been negatively impacted by the rise of healthy eating and natural foods. According to Kantar Worldpanel’s national urban Chinese household panel from March 2015, the annual penetration and frequency of chocolate category has continued to decline. In the 52 weeks ending September 2016 penetration and frequency have dropped to 72% and 4.6 respectively. 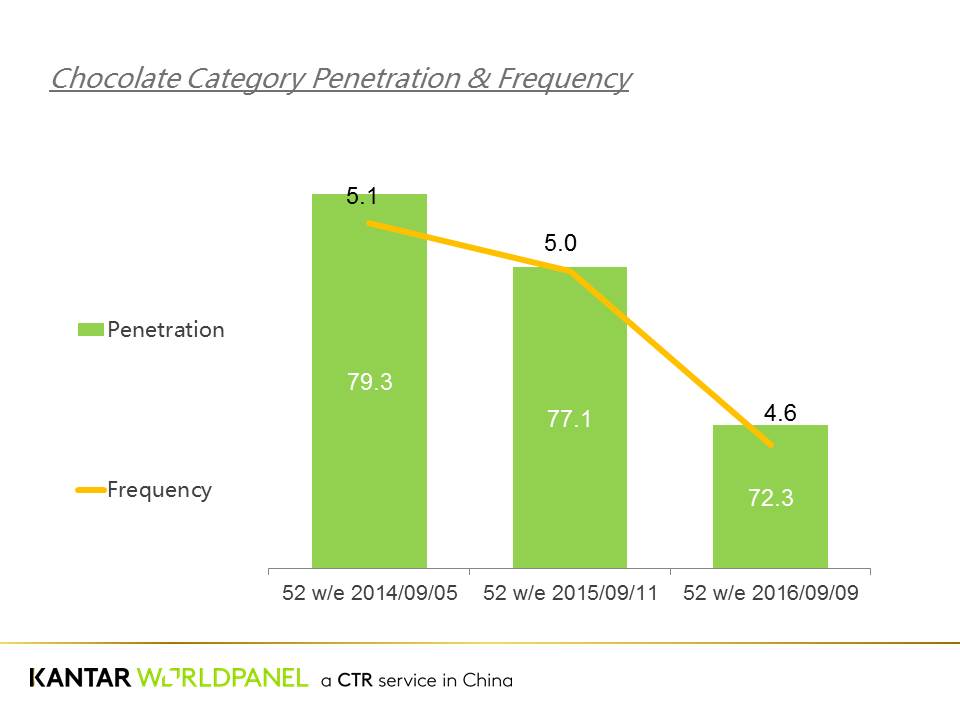 Gifting plays an important role in the chocolate market but the contribution of this channel is shirking. However, Chinese families received more expensive chocolate as gifts last year and among those the proportion of imported products increased too. This premiumisation trend is not enough though to offset the volume losses and the gifting sector in other categories is seeing much stronger performance. In the 52 weeks ending September, 2016, yogurt in gift channel saw 30% sales growth, followed by cereals with 20% sales increase, and wine and nutrient supplement also grew by 6.4% and 5% respectively.
Given these challenges what opportunities are there for the chocolate market in China?

Grasp the fast growth of e-commerce
E-commerce in China represents a particularly attractive channel with the growth of 27% for the chocolate category. Mondelez identified this opportunity and in earlier 2016 signed a deal with the Alibaba Group to sell its products on the Tmall platform. In China’s four key cities (Beijing, Shanghai, Guangzhou and Chengdu), during the 52 weeks ending September 2016, more than 2.5 million urban families purchased chocolate through E-commerce, and this increased by 400,000 households versus year ago. Furthermore, E-commerce in prefecture level cities grew the fastest, among which young families accounted for more than half of the sales. 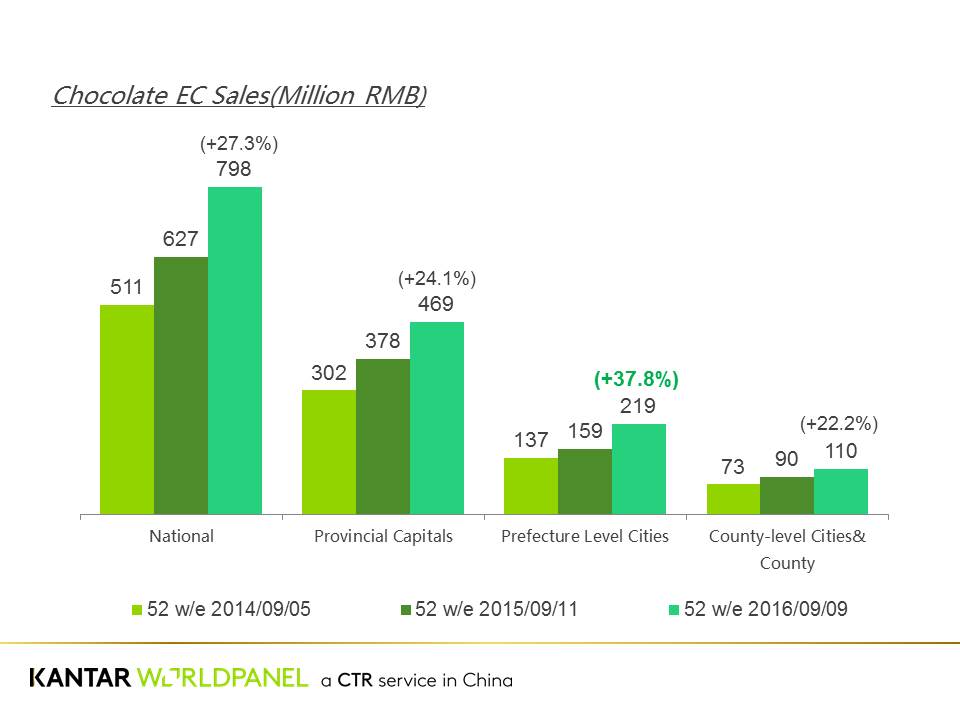 Imported chocolate is more preferred
Chocolate has always been reliant on imported products and this is still true today with imported chocolate holding 45% of market sales and enjoying 3% growth (52 weeks to September 2016), and this is in the context of the whole category declining. E-commerce is the driving force behind this growth rate with 56% of E-commerce sales came from imported chocolate. This trend can also be seen in other FMCG categories with the average food category experiencing a growth rate of 55% via E-commerce which is 15 percentage points faster than non-food categories. 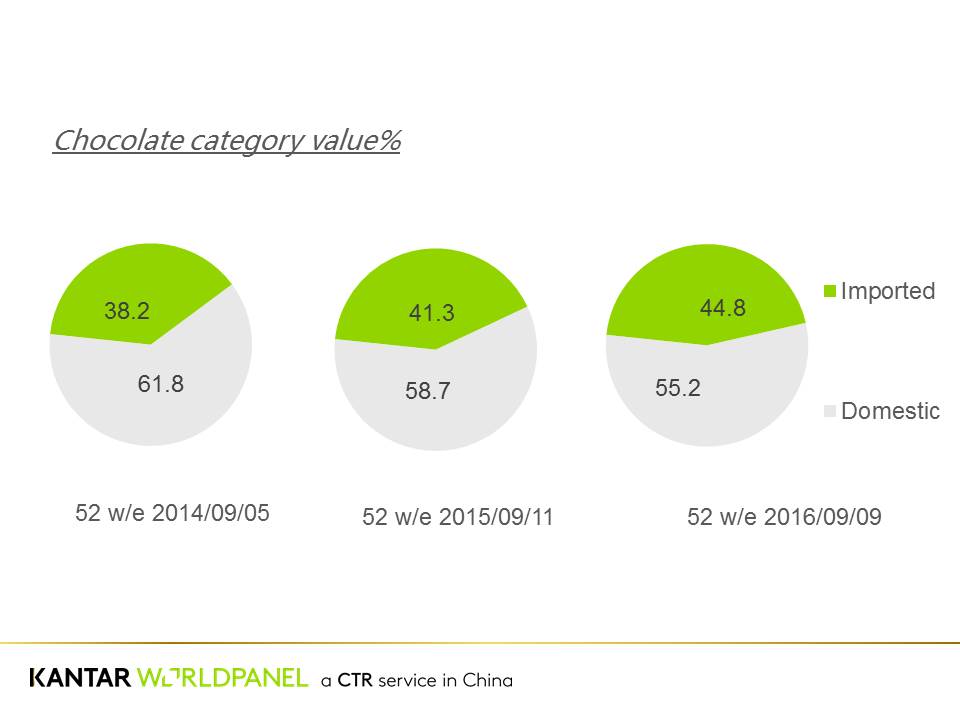 Gifting leads premiumiation and family pack is the key segmentation
During the 52 weeks ending September 2016, the average price of gifting chocolate increased by 5.7%, which has been as a result of the premiumisation trend. Also the family pack has more than half of market share, and consumers mainly go to hypermarket to buy gifting and family pack chocolate. Thus these are key segments for chocolate manufacturers to further cultivate in. 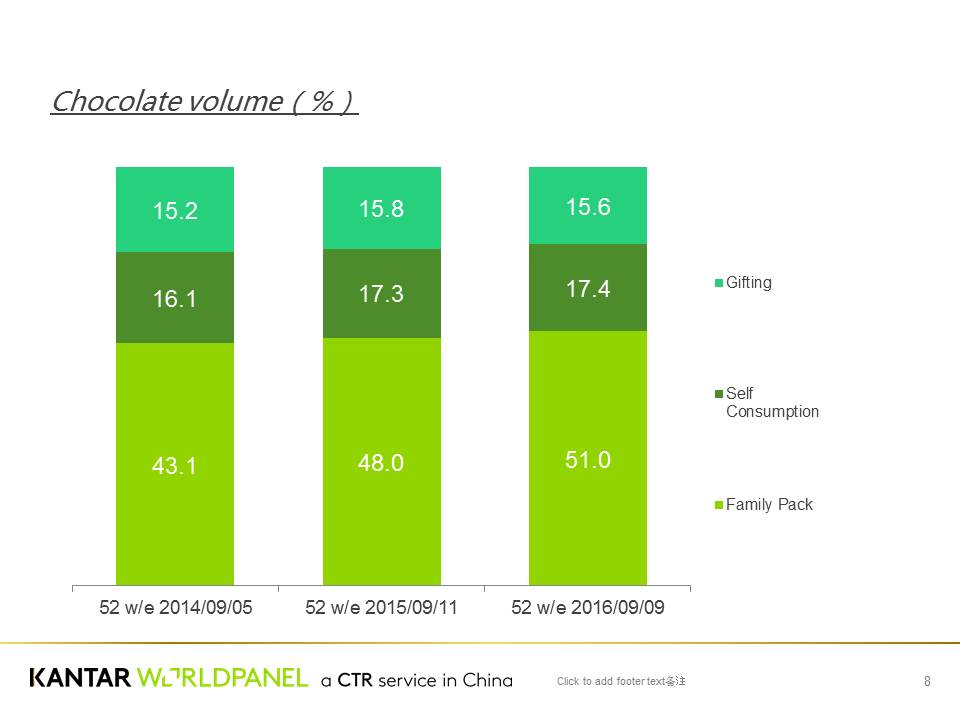 The future opportunities for children market
China’s population is currently undergoing seismic shifts. Predictions based on NBS data show the number of people aged 15 to 29 will see a dramatic drop in the coming 5-10 years. Also, with the impact of two-child policy, the number of children aged 10 to 14 will see growth. Many manufacturers have already started to tap into this growing segment of the population. For example, Germany’s renowned gummy bears opened its Tmall flagship store last year. Some snack brands have also adapted their packaging by creating games that involve parents and kids playing together, developing the parenting-theme product line. Kids cheese is also seeing significant growth: based on Kantar Worldpanel’s urban household panel data the kids cheese segment grew by 22% in the 52 weeks ending September 2016, which doubled the total cheese category growth rate. Thus, having a plan for how to win in the kids segment will be key to growth for chocolate manufactures in China over the coming years.