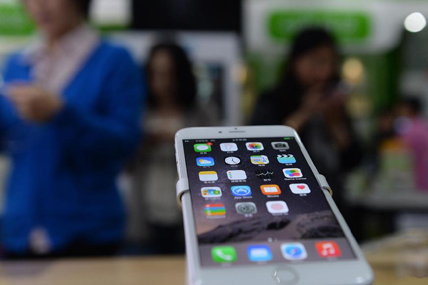 The latest smartphone sales data from Kantar Worldpanel ComTech for the three months ending in February 2015 shows that Apple’s iOS sales have reached an all-time high in urban China where it captured 27.6% of the smartphone market.

"There has been a strong appetite for Apple’s products in urban China seen since the launch of the iPhone 6 and 6 Plus and this has continued into Chinese New Year. China Mobile’s subscribers accounted for 59% of the 27.6% volume share recorded by iOS in the latest period", reported Carolina Milanesi, chief of research at Kantar Worldpanel ComTech. “Across key global markets Apple’s momentum generally continued from last month, with market share gains in all markets except the US and Japan.”

“In urban China, Apple iPhone 6 remained the best selling phone in the three months ending in February growing its share to 10.2% compared to 9.5% registered in the three months ending in January”, explained Tamsin Timpson, strategic insight director at Kantar Worldpanel ComTech Asia. “The iPhone 6 Plus was the third best selling smartphone after the iPhone 6 and the Xiaomi RedMI Note. With the two flagships, as well as older models still selling strong, Apple was able to grab the top spot in the smartphone manufacturers ranking. Xiaomi stepped down to number two.”

Across Europe, Android’s share declined by 2.9 percentage points year-on-year to 67.6% while iOS rose by 2.9 percentage points.  “In Great Britain, as Samsung prepared the channel for the arrival of the new flagships Galaxy S6 and S6 Edge, sales of the Galaxy S5 grew slightly over the previous period and captured 8.7% of smartphone sales keeping this model as the second best selling smartphone after the iPhone 6”, said Dominic Sunnebo, business unit director at Kantar Worldpanel ComTech Europe. ” iPhone 6 buyers were mainly attracted to the phone for its reliability/durability (48%) and attractiveness of the design (44%) while Galaxy S5 buyers also valued the phone’s reliability/durability (48%) and that the phone was offered on a good deal on tariff/contract ( 48%).”

In the US, iOS share dipped slightly to 38.8% from 39.3% this time in 2014. “The iPhone 6 remained the best selling smartphone with buyers mentioning its screen size (45%), LTE capability (44%) and the reliability and durability of the device (43%) as the key purchase drivers. ”, added Milanesi. While screen size matters to iPhone 6 buyers, it is even more important for iPhone 6 Plus customers as 70% cited screen size as their purchase driver.

“The new flagship products in the Android ecosystem by Samsung, HTC, LG and Huawei shipping from April across markets will inject a new spark in the ecosystem battle”, Milanesi concluded. “Differentiation will remain a challenge in an ecosystem where vendors share such an important common denominator - OS. Samsung’s clear departure from previous generation’s design will certainly help the Galaxy S6 and S6 Edge to stand out ”