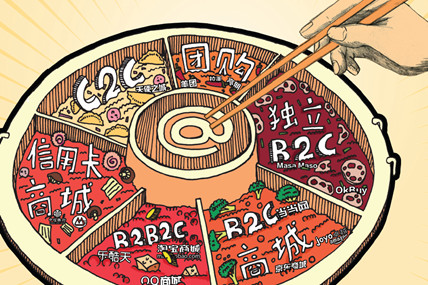 It is the online channel which is driving the incremental revenue for many categories.

2013 was another extraordinary year for E-Commerce development in China. Despite the slowdown of overall retail sales, the online channel still enjoyed rapid growth. Chinese consumers splurged a jaw-dropping record 35.01 billion RMB ($5.7 billion) in just 24 hours during the “11.11” Shopping Festival in only one e-commerce giant Tmall. This amount of money equals half of all China retail sales in September. In addition, B2C players continued their expansion spree and the buyer base continued to expand. Kantar

According to Kantar Worldpanel, the world leader in consumer purchasing behavior insights, the penetration in the online channel among urban Chinese families grew continuously, from 18% in 2011 to 30% in 2013. In 4 key cities (Beijing, Shanghai, Guangzhou and Chengdu), the penetration was even higher, hitting 46% last year. Successful retailers including Yihaodian and JD.com contributed to the penetration improvement. In addition, some smaller B2C online retailers also entered the market. With the major market players’ logistics and distribution network rapidly extending to western and low tier cities, Chinese consumers’ online purchasing power is being released.

Another finding from Kantar Worldpanel is that the rise of the ecommerce channel started to pose more impact on traditional channels. In 2013, 38% of sales from the ecommerce retailers were sourced from other offline channels. Two years ago, this figure was only about 18%. This indicates the ecommerce channel is getting stronger to compete head on with offline channels for a higher share of consumers’ wallets. The situation was not same by city tier: although the switching level from offline to online was rising across all city tiers in the past three years, the cannibalization was much heavier in high tier cities. In the 4 key cities mentioned before, switching level was 44% of sales; but in county cities, within ecommerce sales, only 30% was contributed by offline channels.

So does this mean the ecommerce can only grow by stealing from offline channels? Fortunately, the answer is no. It is the online channel which is driving the incremental revenue for many categories. For example, according to Figure 1 below, categories including Nutrient solid drinks, Nutrient supplements and Color Cosmetics all reported over 80% sales incremental growth gained from ecommerce channel, while less than 20% of sales were coming from offline channels. In other words, when it was developing rapidly, ecommerce channel did not heavily influence offline channels’ existing sales. Instead, it brought incremental sales to the whole category, i.e. new consumer demand.

Therefore, for e-commerce, it aims to grow sales but it is more than a sales channel. The main challenges that brand owners have to face include how to capitalize the trend and to encourage consumers to maintain their shopping offline while at the same time buying more online, and how to educate shoppers to utilize ecommerce channel just as channel.

Many manufacturers have begun to change the way they think and respond positively. Rather than engaging in a price war between different sales channels, they are starting to realize that creating a brand new shopping experience online would be a wiser choice. For instance, local skin care brands only offer ‘Chinese style’ premium gift pack online while continue to stock value product in supermarkets, and more brands are launching ecommerce only packages or flavors to differentiate the product offering. Moreover, consumers are exposed to the media campaign through ecommerce platform, acquire product information, track delivery information and interact/share their purchase experiences. All these benefits contribute to an extraordinary online shopping experience.

At present, on average there are five items in consumers’ online baskets, while 8 in hypermarket baskets. Basket size for online retailers still has some room for improvement. Looking to the future e-commerce market, as an increasing number of e-commerce companies focus on mobile payment solutions and logistics network development, ecommerce channel will undoubted continue to be bright spot in many ways. A great customer shopping experience will be THE differentiator that makes winner or losers in the war for Chinese shoppers.