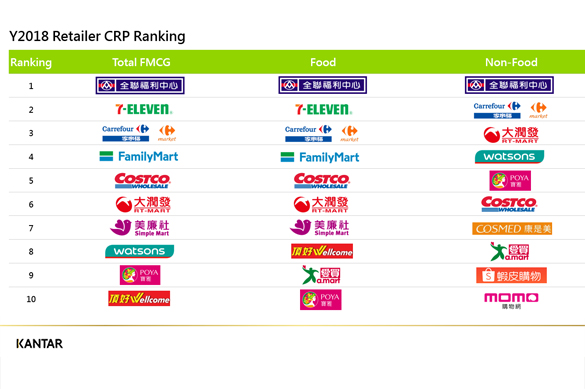 Kantar released the top ten in the overall retail channels consumption rankings: PX Mart topped the list, followed by 7-Eleven and Carrefour Group in sequence; Kantar observed the consumer'purchasing behaviors and pointed out, PX Mart has been active in running the unique "PX Mart" economic aesthetics in recent years, its youthful image has effectively attracted consumers under the age of 35, at the same time, with a series of annual rewards programs, it was nicknamed by public as "the talented kitchenware manufacturer who is held back by the retail business", the consumer adhesion has been dramatically enhanced and consumers'purchasing frequency in PX Mart has increased. The success of 7-Eleven as convenience stores, is attributed to having a large number of stores across the entire Taiwan, it has a high penetration rate. FamilyMart with frequent marketing campaigns was ranked fourth following 7-Eleven. In recent years, Carrefour Group's business strategy has shifted to “Carrefour Market” (a Carrefour store in the form of a supermarket), especially in the central and southern regions, which has led to significant growth.

In the food category, Costco reported strong performance in the number of consumers; In the household supplies category, Carrefour Group and RT Mart Group were ranked two and three respectively, followed by personal care stores such as Watsons, POYA and COSMED. As for Internet channels that are inseparable from the lives of Taiwanese consumers, such as Shopee and Momo shop, they have been in the list of top ten retailers in the household supplies category. "Kantar 2018 Q4 Taiwan FMCG Monitor" further pointed out that, Internet channel now is such a dominant channel just secondary to hypermarket, with its continued strong growth momentum, it has become the second largest channel.