All is not lost - for consumer packaged goods anyway 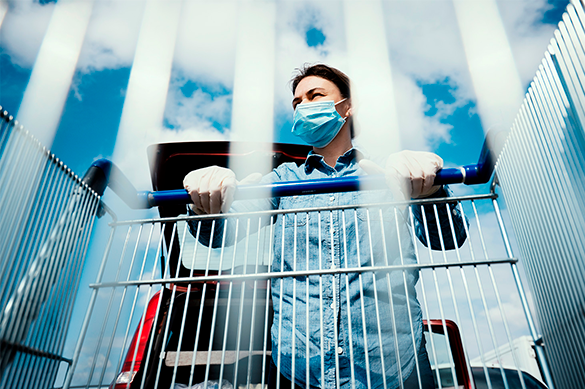 If you thought 2020 couldn’t get any worse, think again. GDP figures for the second quarter have plunged far lower than the first, and the forecasts already suggest we’re heading towards a much deeper recession than the one induced by the 2007-8 global financial crisis.

There are hopes that the world will be back to something like normal in the final quarter of this year, and if not, then the start of 2021. However, the current reality is that the pandemic is far from over, with some countries still coping with the first wave and the threat of a significant second wave getting more likely by the day. Also, while initial trials look promising, we still don’t have a vaccine. There is still a way to go before the crisis is fully behind us, and for large segments of the population the virus remains a significant threat. Governments find themselves between a rock and a hard place, under pressure to get the economy moving while the virus is far from being eradicated.

The overall result of these tailwinds will be a slower recovery than any one of us would like. We’re likely to see a significant rise in unemployment, and an increase in fears about the future. It’s likely that, for quite some time, it won’t feel anything like a recovery at all.

The news media will continue to cover the news, and our pre-programmed negativity bias will lead us to believe that the bad news will apply to every sector of industry. The reality is it won’t – there are always winners and losers. And if there’s one sector that is likely to prosper during the recession, as it has during the pandemic, it will be the food and grocery industry – also known as the consumer packaged goods (CPG) sector.

The resilience of CPG value

Economic statistics like GDP actually have little bearing on how much we spend on food and grocery every week. We’ve looked at the last 11 years of data, across 12 countries, and found only a weak correlation between GDP and CPG growth levels. Even when we used different time lagging scenarios to look for a relationship we found none. So, we should be wary about assuming that poor GDP figures will translate into similarly low CPG figures sometime in the future. 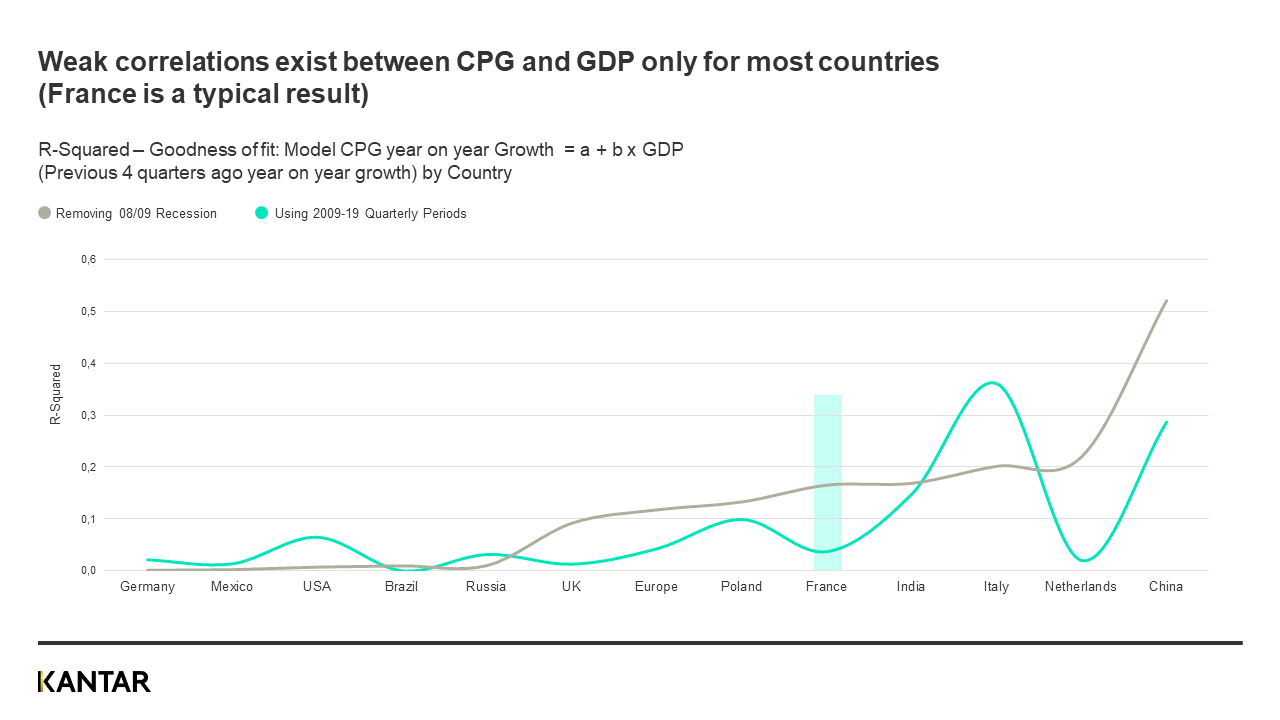 The next statistic to, frankly, ignore would be measures of overall consumer confidence. These measures are highly likely to hit ‘rock bottom’ later in the year. Our work looking at this metric over time, however, shows that it too is uncorrelated with CPG growth, and has not in the past been able to predict changes in CPG value growth with any accuracy.

Why are they such poor predictors? The (rather obvious) answer is that we can’t simply stop eating, drinking, washing and cleaning. When it comes to saving money, we think more easily about what we can stop completely – for example, holidays, car purchases, home appliances, gym memberships and eating out. In the 2007-8 recession, we asked main shoppers in a household “what are you likely to reduce or cut out to manage your income?” It was these big-ticket expenditure items that topped the list in every country, with food and grocery everywhere always much lower.

That isn’t to say we won’t also manage our food and grocery bills; we all do to various degrees and for various reasons. However, in Western Europe, for example, very few of us buy exclusively Private Label products or shop only in discounters. We tend to adopt various budget coping strategies that don’t involve maximising the potential savings we could make with a more disciplined – well managed and totally consistent – approach to where we shop and what we buy.

When we investigated 12 countries over 11 years to understand what measures correlate with CPG expenditure growth, it was volume (the amount of goods bought) that came out top and downtrading (buying cheaper goods) bottom. This suggests that if we reduce our CPG spend in the recession it will be primarily by cutting items out, rather than shopping in cheaper stores and buying cheaper items and categories – for instance moving from fresh to frozen food. As we’ve already said, we struggle to do this every day and week, and the evidence confirms that our preferred way of budgeting is to ‘stop buying’ rather than to adapt and carefully manage our shopping behaviour.

The scale of the decline

To understand the scale of the potential decline in CPG, we need to look at those households who are already working to a strict budget, and those whose income will reduce due to unemployment.

When we investigated the latter in Spain, in households where at least one person had lost their job, we found a 2% reduction in overall CPG spend in the year after being made unemployed. This shows, especially in recent times when a change of any measure under 10% is seen as low, the underlying resilience of the CPG sector in general. Consequently, even if levels of unemployment reach double digits then CPG growth overall will still be closer to flat if the 90% or so of people still in employment spend at the same levels as before. 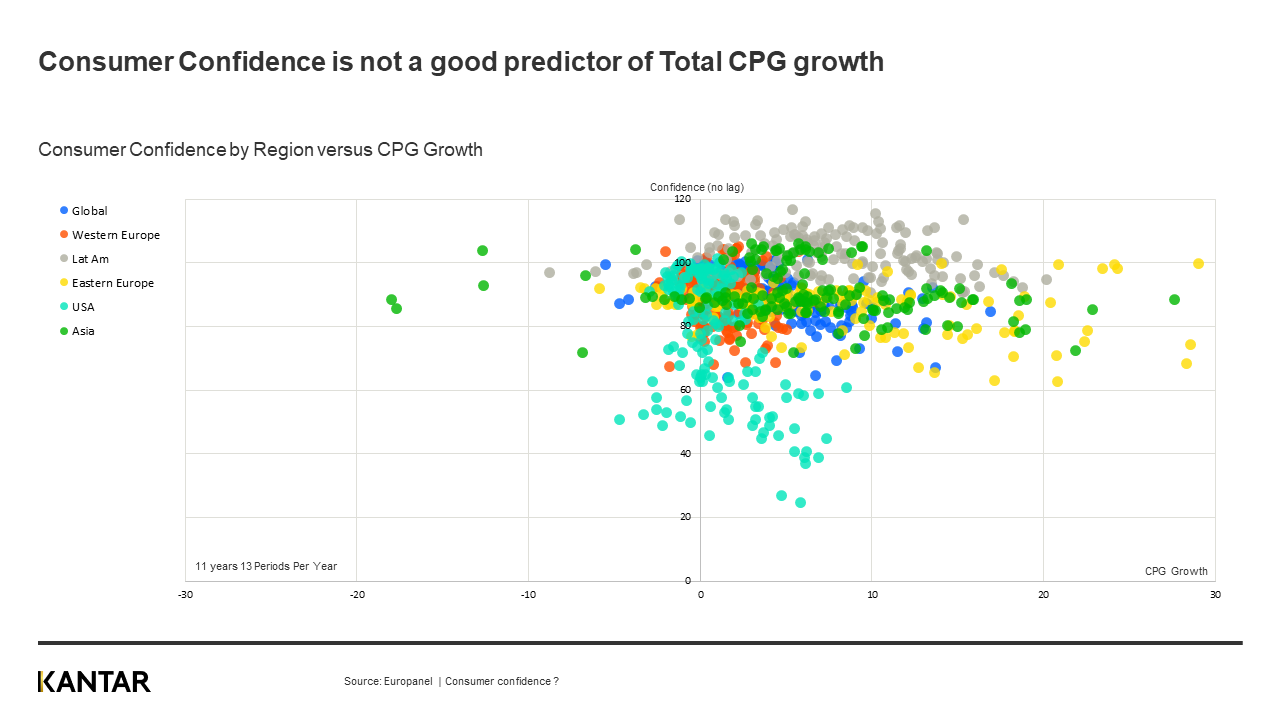 Shoppers are likely to try to save money, and be more cautious – but as we said before, they will review large item expenditure first.

We must also take into consideration the benefit for food and grocery that could easily come from the most consequential and long-lasting effect of the pandemic: people working from home. We know that growth of around 20% occurs when everyone is at home and out of home purchasing is very restricted. So, if many of us remain homeworkers during the coming months of recession, which is the most likely scenario, we would expect – even with high unemployment – CPG spend to remain at higher levels than before the pandemic.

If more of us spend more time living and working at home important secondary effects will come into play. For example, it will have serious consequences for our transport services, city spaces and hospitality services that rely on people going to their workplace. Food and grocery manufacturers that rely more on out of home purchasing will therefore find it harder to grow – as they have done during the pandemic – if these conditions persist.

Price is a potential battleground

There is one reason to be cautious about CPG value staying in growth through the recession: the high potential for a retailer price war. Pure ecommerce and discounter retailers look to be in prime position to win share during a hard hitting recessionary period, hence the need for the mainstream retailers to compete more directly on price. 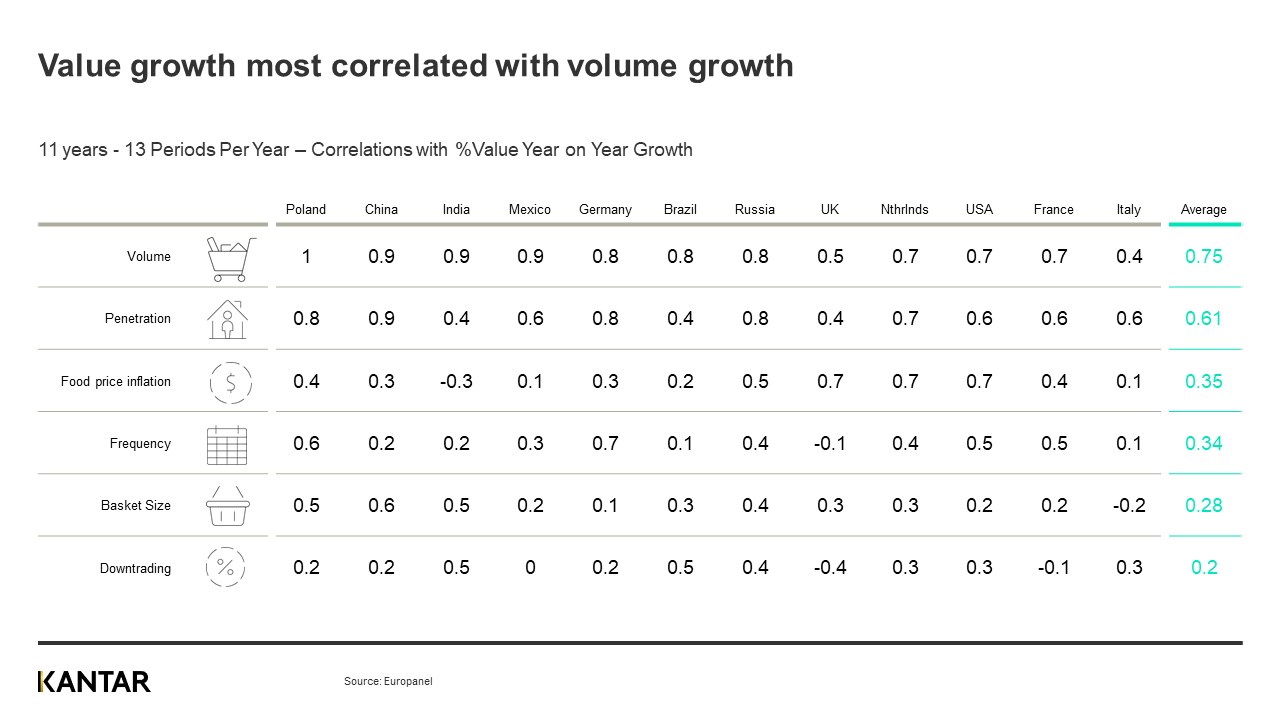 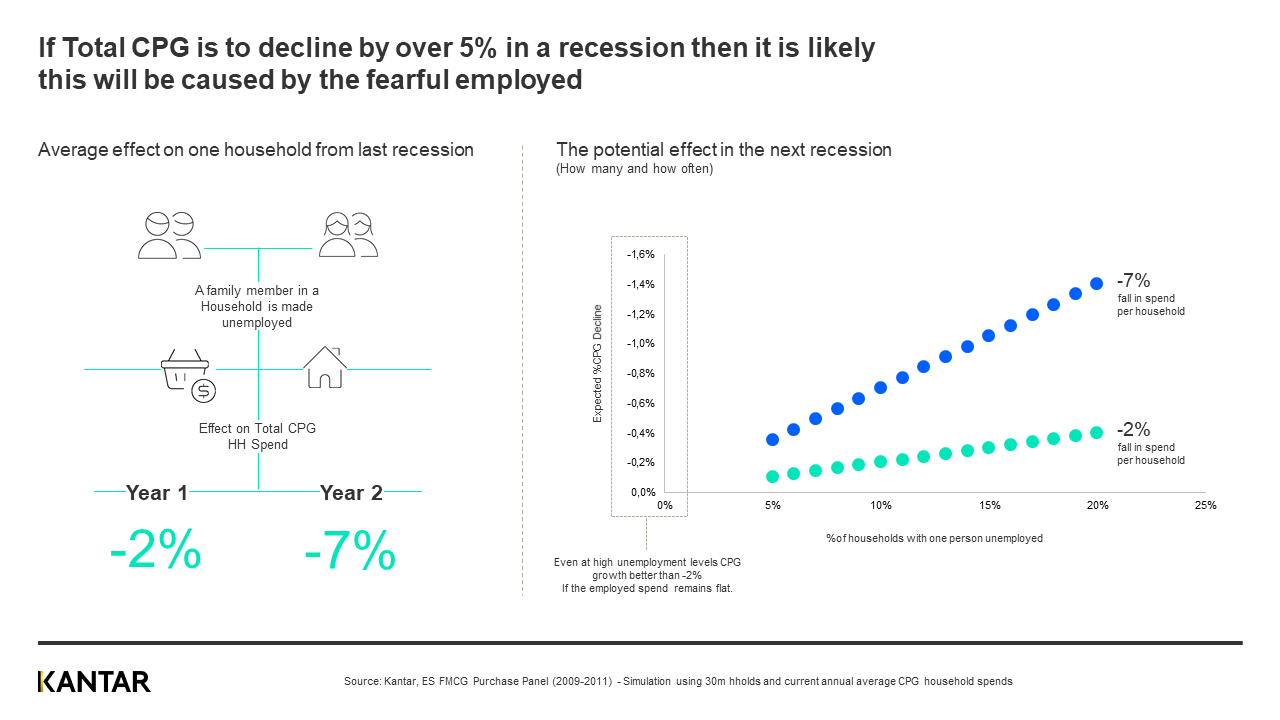 We believe they’ll take a multi-faceted approach, creating a positioning that nullifies the current price advantages of the discounters and pure play ecommerce retailers. The main areas they’re likely to target, based on what we’ve seen in the past, are:

In conclusion, the recovery period isn’t going to feel like one for any of us. However, brands, manufacturers and retailers in the food and grocery sector should remember the following points: 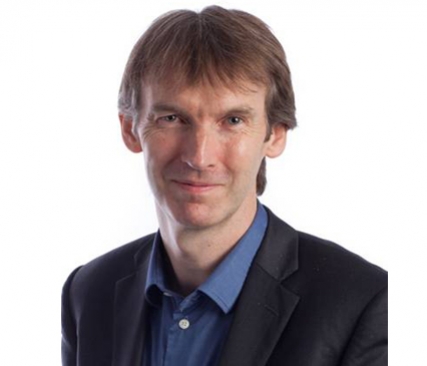