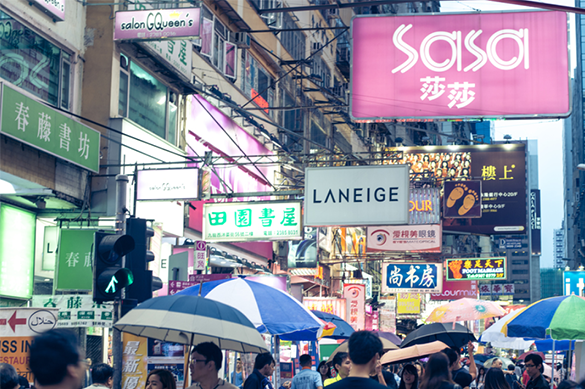 Spending in fast moving consumer goods (FMCG) across China grew by 4.3% year on year, the same as in 2017. Economic growth across the country eased to 6.6% in 2018, the slowest rate since 1990[1]. Cooling manufacturing activities and slower fixed-asset investment in Q4 are likely to have impacted consumption with FMCG growth noticeably weaker than the previous quarter.

Across all regions and city tiers, the West region and provincial capital were up by 6.5% and 4.9% respectively. Modern trade (including hypermarkets, supermarkets, and convenience stores) grew by 2.1%, 0.5 points lower than 2017. However, the modern trade sector witnessed consolidation with the top players accounting for 37% of sales in 2018, edging up 1 point from 2017.

Due to opening new stores, expanding their portfolio of formats, and digital transformation, six of the 10 top retailers in China reported stronger performance in 2018. Sun Art group maintained its leading position with 8.4% of share in modern trade.  Their recent announcement to convert Auchan stores to the Rr T-Mart model will help them gain more efficiency in their merchandising and supply chain. The Vanguard group and the Walmart group have both increased their market share by 0.2% in modern trade during 2018. Vanguard group enjoyed a significant uplift on sales coming from its supermarkets and convenience stores. In 2018, Walmart opened 33 new stores, including 21 hypermarkets, four Sam’s Club, and eight Huixuan. Huixuan is Walmart’s first ever small format supermarket sub-brand and focuses on fresh food, free home delivery, and Internet technology to enhance the shopping experience. Both Vanguard and Walmart built closer partnerships with Tencent to empower their stores with smart digital technologies.

Yonghui remained the fastest growing of the top players in 2018, with a 0.6 point increase year on year. By the end of Q3 2018, Yonghui had opened 429 YH Life (neighbourhood stores and O2O delivery) and 56 Super Species (supermarket and fine dining). To strengthen its position, Yonghui recently expanded its M&A activities, forging partnerships with Parknshop and Sichuan local player Hongqi. Amongst other regional players, WSL, Bubugao Better Life, and Spar continued to outperform their peers through their aggressive regional expansion and new retail experiments.

Kantar Worldpanel reported a strong 34% growth in FMCG e-commerce spend year on year. In 2018, 65% of Chinese urban families purchased FMCG online, 4.7 points higher than the previous year. In the four key cities (Beijing, Shanghai, Guangzhou and Chengdu), 72% of households purchase FMCG online, and in county-level cities, over half of the families purchased FMCG online. Furthermore, higher frequency is contributing to the growth as online shopping becomes more routine in consumers’ daily life and as mobile shopping becomes more prevalent. In 2018, Chinese shoppers made 8.9 online purchases on average.

1. Retail formats and the convergence of channels

The line between channels will continue to blur and converge as the top players strive to meet the demand for choice, convenience and pleasure. Walmart and RT-mart for example, are transforming their traditional hypermarkets to a more compact format offering O2O express home delivery.  They are also building more in-store experiences with specialist boutiques and smart devices, allowing them to compete in the traditional territory of supermarkets and convenience stores. Convenience stores are satisfying the demand for home delivery through third-party platforms, such as Meituan or ele.com, as well as moving into the space of neighbourhood supermarkets to offer more fresh food and community services.

2. Battle will intensify between Alibaba and Tencent

As pure online growth becomes more difficult to sustain  the e-commerce giants continue to acquire and build partnerships with offline players. By the end of 2018, the Tencent/JD camp (including Vanguard, Walmart, Yonghui, Carrefour, WSL and Bubugao Better Life) reported 22.5% share among the top 10 retailers in modern trade, noticeably higher than 11.0% recorded by Alibaba camp (Sun Art and Bailian). In 2019, offline retailers will further leverage data and technology to grow offline retail efficiency and experiences, therefore attracting even more regional players to side with the two giants.

The experience economy will play an increasingly important role in the retail sector. The success of Hema proves that shoppers are not only willing to pay extra for premium products, but also for a dining experience within the store. In 2018, 18% of families in Shanghai purchased fresh food in Hema and we will continue to see this number rise. According to Kantar Consulting, 184 ‘new retail’ model stores were opened in 2018 and they have substantially transformed how consumers buy and consume fresh foods from brick and mortar stores. A superior shopping experience is the way that offline retailers will find growth during 2019.

A number of smart retail technologies were introduced in 2018.  In 2019 we will see technology playing a bigger role in driving in-store activation and enhancing the shopping experience. Technologies such as augmented reality (AR), robots, facial recognition payment systems, as well as smart vending solution and mini-programs are gradually shaping how consumers shop in China. For example, Carrefour Le Marche allows shoppers to scan QR codes during the trip and uses facial recognition payment at the check-out to enhance convenience. We expect to see selected new technologies as a key enabler to direct traffic from online to offline and help retailers to win more new shoppers as well as increasing their spend per trip.

5. E-commerce in lower-tier cities is a good way for brands to reach more shoppers

The ownership of mobile devices and the adoption of e-commerce in the lower-tier cities is catching up with the top-tier cities. Over the past three years, the gap in e-commerce penetration between upper and lower tier cities has narrowed, with 62% of shoppers in lower tier cities using e-commerce to buy FMCG products. The rise of Pingduoduo indicates the attraction shoppers have for group buying deals and Kantar Worldpanel’s data shows a higher level of shopper engagement in counties compared to the than national average. The rapid adoption of e-commerce in lower-tier cities means more opportunities for brands to use it as an effective channel to reach and convert more shoppers. 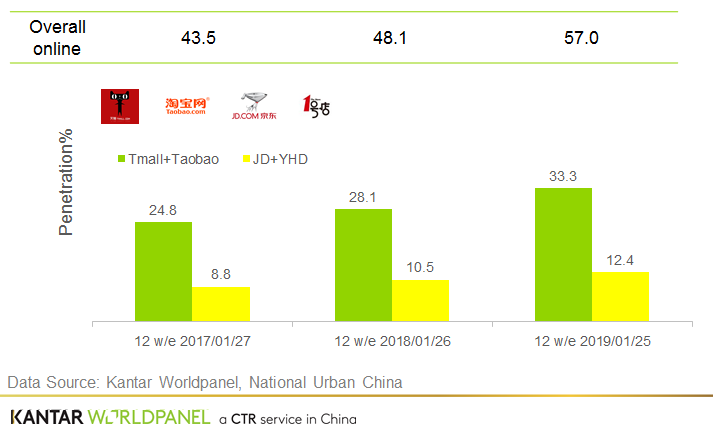