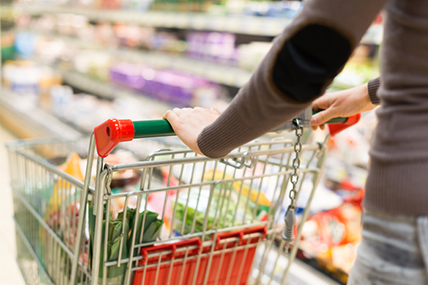 Kantar Worldpanel, the global market leader in consumer panels, reports that the spending in fast moving consumer goods (FMCG) in the second quarter of 2017 grew by 3.2% compared to the previous year, a noticeably stronger performance compared to previous quarters.

Modern trade (including hypermarkets, supermarkets, and convenience stores) grew by 3.5% in the second quarter of the year, as more retailers strived to transform their business models to meet shopper needs. Key cities and provincial capitals grew slightly faster, up 3.4%, with e-commerce remaining a key engine behind the performance. Across all regions, the West and North markets reported a more upbeat trend, up by 5.8% and 3.4% respectively. 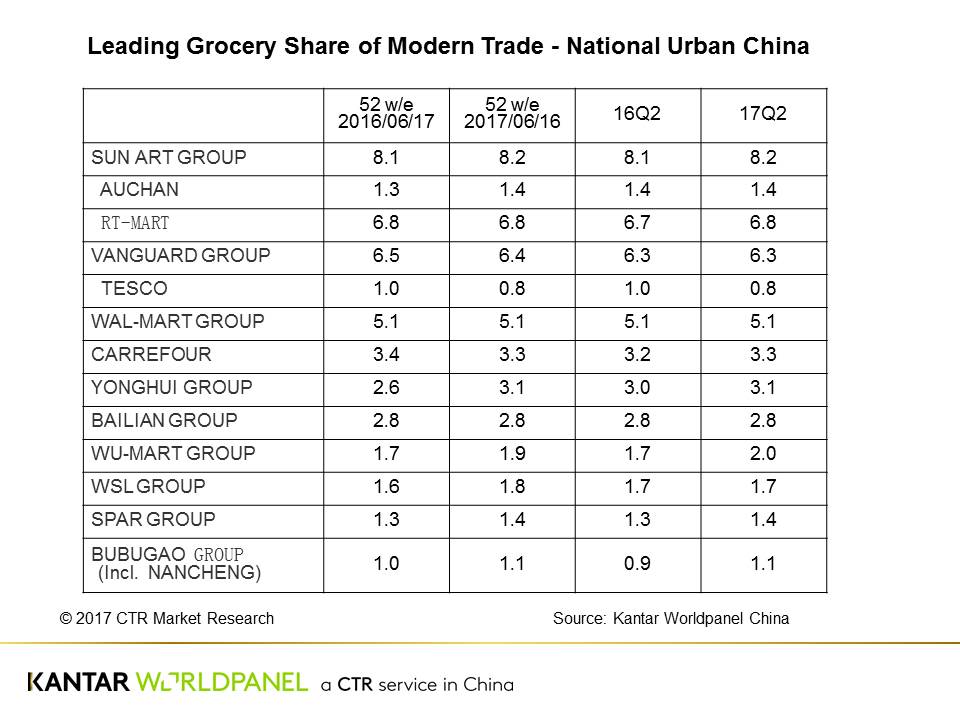 Most of the top 10 retailers saw share growth or stability in Q2 compared to the previous year, as they are either opening more stores to expand their footprints or pursuing multichannel strategies to meet consumers’ changing demands.

Amongst international retailers, Carrefour started to experience share recovery on a quarterly basis. The retailer has been expanding steadily by opening small format neighbourhood stores under the name of Easy Carrefour with 29 stores already open in Shanghai and one in Wuxi. The new store format, with its bright orange colour, aims to appeal to younger shoppers who look for convenience and a relevant mix of merchandise.

Local retailers continue to outpace their global counterparts in Q2. It is worth noting that Wu-mart’s share also grew from 1.7% to 2.0% between Q2 2016 and Q2 2017. Wu-mart is one of the local retailers who is adopting a more aggressive OAO (Offline and Online) strategy by utilizing the Dmall platform to create a seamless mobile and offline shopping experiences. Now, consumers can pay for their purchases in Wu-mart stores with Dmall APP or receive deliveries within two hours after ordering them on their phones. While deeply focused in Beijing and Huangzhou, Wu-mart has gone from strength to strength and has experienced rapid growth through its unique footpath. Another local retailer, Bubugao, also saw its share grow from 0.9% to 1.1% through its regional M&A acquisition activities and organic store expansion in the Southwest region.

Kantar Worldpanel reported a robust 28.2% growth in FMCG spend through the e-commerce channel in first half of 2017. Now, e-commerce accounts for 6.9% of FMCG spend over the first six months of 2017, 1.4 points higher than in the same period last year. 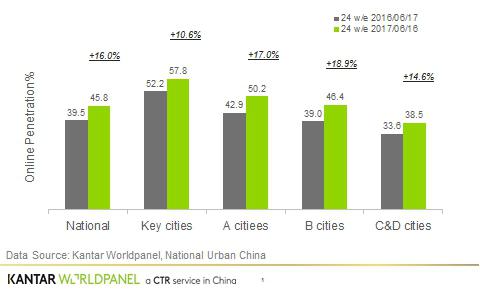 Given the more aggressive sales promotions by major players across the year, the e-commerce channel continued to gain traction with Chinese shoppers. In the latest 24 weeks ending 17th June 2017, more than a half of key cities and provincial capitals cities’ consumers purchased online. Even in lower tier cities (county level cities and counties), 40% of families shopped online.

New Retail has been the buzzword for e-commerce players during the first half of 2017. JD announced its plan to work with one million grocery stores to restructure the traditional retail infrastructure. Alibaba worked with Bailian and Intime to create integrated OAO shopping experiences through sophisticated payment and logistic systems. New retail formats like Hema and Yonghui Super Species also look to woo middle class shoppers who want to integrate premium shopping and dining experiences.