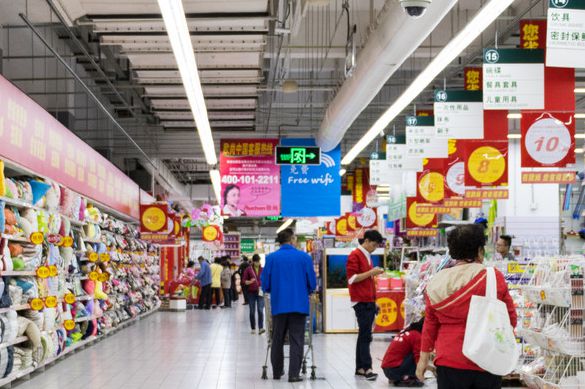 Kantar Worldpanel, the global market leader in consumer panels, reveals that the growth rate of the fast-moving consumer goods (FMCG) market in China accelerated during Q3 vs Q2 2018. There was a value growth of 6.3% in the latest 12 weeks compared to the same period last year. Price was the biggest driver of the growth, up by 4.8% in Q3 compared to the same period last year. China’s consumer price inflation in September rose to 2.5%, the highest monthly figure since this February, according to the latest government figures.

Modern trade (including hypermarkets, supermarkets, and convenience stores) also reported faster growth of 2.6% in the past 12 weeks, among which supermarkets have grown by 5.0%, thanks to more traffic and higher basket values. This has in part been driven by both digital and shopper experience transformation within the offline stores. E-commerce continued to report very strong growth in the latest quarter, with sales value up by 43.6%, now representing 10.6% of the total FMCG market.

Mixed performance was observed amongst the top 10 retailers. Sun Art Group maintained its leading position, but did not see any share growth over the last quarter. With 11 new stores opened since the beginning of this year, RT-Mart focused on the digital transformation of a quarter of its 400 stores using New Retail technology developed by Alibaba Group.

Using Alibaba’s Hema supermarket as a model, RT-Mart has rolled out a series of features aimed at improving the shopping experience for customers. RT-Mart is now the first grocery partner of Alibaba to leverage some of the Hema innovation models for its own new retail transformation.

Vanguard Group and Yonghui have improved their market share noticeably in Q3 2018, up by 0.4 and 0.6 points respectively in the latest 12 weeks. Vanguard Group reported a significant value growth of 9.1% in Q3 2018, mostly driven by strong performance in the South and West regions. FMCG shopper traffic flow is moving more towards smaller and convenient stores and the Vanguard Group is riding on this trend by opening more new small store formats. 59% of Vanguard Group’s value growth in the past 12 weeks was coming from supermarkets and CVS. In the meantime, Vanguard also strived to adopt new retail business models by introducing dinning service and unmanned cashiers into some of their stores.

Yonghui kept its pace of shopper expansion and announced the opening of its 1,000th store in Beijing in August. The latest Kantar Worldpanel report confirmed improved penetration for Yonghui on both large and small stores, which grew from 8.6% to 9.8% between Q3 2017 to Q3 2018. Of all the regions, Yonghui grew faster in the East and West regions. And for the first time in the West region, Yonghui surpassed Walmart to be the number one retailer in modern trade. Also, Yonghui recently revamped its private label strategy and further extended its private labels from fresh food to other categories. Focusing freshness and quality, its fresh food private label “CaiShiXian” now provides daily fresh vegetables with product labels for each day of the week.

It is worth noticing that regional players are also shaking up the retail landscape in their home turf. WSL Group’s market share grew from 1.7% to 2.0% between Q3 2017 to Q3 2018, with value growth of 18.8% in the latest 12 weeks. WSL Group saw a significant uplift on shopper basket value in the past two quarters, as its Zhongbai hypermarkets accelerated the speed of introducing new products and optimising their product profiles. Another regional retailer reporting good performance is Bubugao Group. In the first half of 2018, it opened 17 new stores. Bubugao Group has increased its penetration in both the South and West regions according to Kantar Worldpanel figures.

E-commerce went from strength to strength

E-commerce showed the strongest value growth in Q3 since the beginning of this year, thanks to the continued expansion of the online buyer base and stronger performance during online festivals. In the latest 12 weeks ending 7th September 2018, 41.5% of Chinese urban household bought FMCG online. This number was 9.9 points higher than the same period in 2017. Taobao and Tmall (under Alibaba Group) together were still well ahead of JD and YHD, with 19.4% of shoppers purchasing from either of platform in the past 12 weeks.

Kantar Worldpanel expects strong growth momentum with the upcoming Single’s Day, as Alibaba and JD are fully leveraging the presale period from mid-October to early November to lock-in consumers’ spend. This year major brands have been encouraged to put their latest innovation on the presale list with key opinion leaders before Singles’ Day.

Online giants continued to push the integration of online and offline assets. All the new formats under the ‘new retail banner’ have now reached 5.2% of all shoppers in the top 27 cities, though their impact at a national level is still limited. Alibaba is rapidly expanding their Hema business, with over 80 stores in 16 cities. Q3 also saw an intensifying battle in the food delivery market. The IPO of Tencent backed Meituan-Dianping in September and the merge of Eleme and Koubei recently will re-write the definition of convenience through local services and make the boundaries between different ways of reaching shoppers even more blurred.