The latest supermarket share figures from Kantar Worldpanel in Ireland, published today for the 12 weeks ending 20 July, show a strong performance for Dunnes as it posts a sales increase of 2.6% to hold its 21.2% share of the market.

David Berry, commercial director at Kantar Worldpanel, explains: “Despite declining numbers of shoppers coming through its doors over the past year, Dunnes has managed to increase footfall levels within the past two months, largely by drawing in customers with branded promotions. Branded sales have grown in value terms by 5% this period thanks to well publicised ‘round euro’ promotional offers. Traditionally branded products have been a core strength for Dunnes, and it has used their appeal to draw back customers.”

Meanwhile, Lidl and Aldi are both continuing their impressive growth streaks. Both Aldi and Lidl achieved record market shares this period, with Lidl’s share now standing at 8.4%, while Aldi boasts an 8.3% share.

David continues: “On the flip side to Dunnes’ branded success, SuperValu has seen a strong performance among its own brand products. While the shift to cheaper own label goods has led to a slight drop in value sales, SuperValu has posted a record number of shoppers this period. Some 73.6% of Irish households shopped in SuperValu over the past 12 weeks – up an impressive 94,000 customers compared with last year.”

Tesco’s performance lags behind the market, mainly as a result of decreased customer spend in store – the average shopping trip fell in value by €1.60 as fewer items were placed in baskets. While overall grocery market growth has remained subdued at just less than 1% there are signs of a boost in Dublin – the driving region of the Irish economic recovery – where the value of grocery sales has increased by 5.4%. 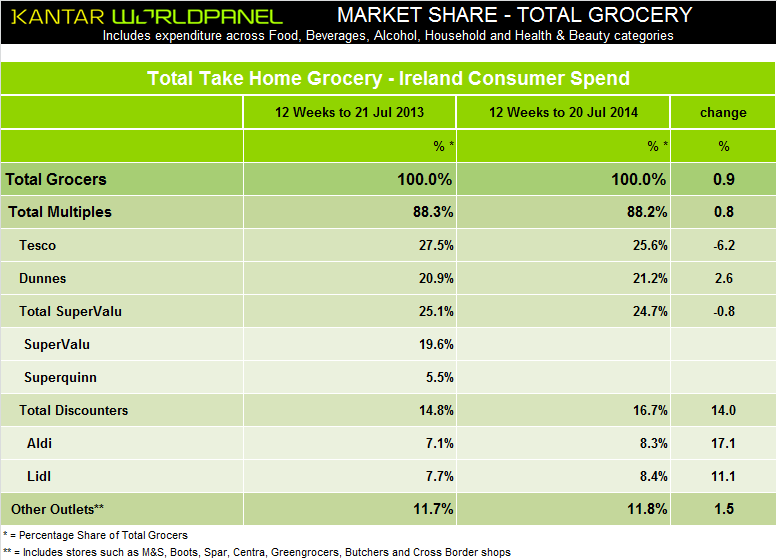