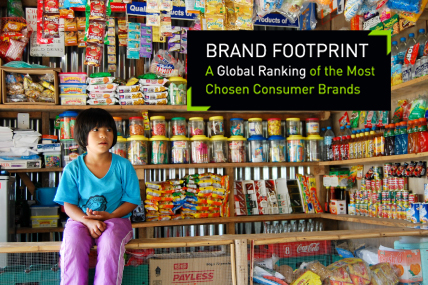 Though the global economy has created global brands, there is no such thing as a global FMCG shopper. The marketer’s role is to unravel why consumers around the world consistently differ in where and how they shop.

Brands are creating unique solutions to local challenges (see map, below). Some themes are present in all countries, to varying degrees.

Modern trade dominates in developed economies, with 85% market share. In emerging economies, traditional trade, local commerce and alternative retail formats still rule. Across Asia the rising cost of land, increasing urbanisation and low car ownership have led modern trade to be dominated by smaller format retailers. In China, while 56% of FMCG is now modern trade, the share commanded by overseas retailers declined from 20% in 2013 to 19% in 2014. The hypermarket model has stalled and convenience stores such as SPAR and Lotus are booming.

Another challenge to the growth of FMCG brands is the steady rise of private label in Europe, from 11.5% market share in 2008 to 13.7% in 2014. “This is not a big jump for private label, but it represents inexorable growth, providing retailers with higher margins and competition for brands for shelf space,” says Alison Martin, director of Kantar Worldpanel. Retailers, particularly in Western Europe, are responding to consumers’ search for value and desire for accessible luxury with diversified private label brands that appeal to a broad range of buyers. Value-driven private label is not the sole domain of modern trade retailers. In markets where there is no modern trade, manufacturers are responding. In Latin America, for example, Quala and Alicorp have become the ‘people’s brand’ with lowcost, essential FMCG ranges.

The rise of discount grocery retailing is a very European success story: Lidl is predicted to become Western Europe’s biggest grocery retailer by 2018. In Eastern Europe discounters grew their market share from 13% in 2007 to just over a fifth of the market (22%) in 2014. Kantar Retail predicts that sales at discount grocers will grow at a rate of 4.8% a year until 2017, compared with 3.1% for modern trade. Kantar Worldpanel forecasts the discount format will be replicated worldwide, but this will not be led by European retailers. In Brazil, modern trade has over 50% market share. With the country's GDP growth more than halving from 5% in 2008 to 2% in 2014, the Atacarejo format (combining wholesale and retail for people to buy in bulk) is thriving, as low-income consumers seek more cost benefits.

Ecommerce is now an established retail channel worldwide – Amazon turns a mature 21 in 2015. But for FMCG, online remains tiny (an average of 3.9% of spend) compared with bricks-and-mortar outlets. Online adoption for FMCG ranges from 0.2% in Brazil to 13.2% in South Korea. Stéphane Roger, Global Shopper and Retail Director at Kantar Worldpanel, calls this “a puzzle of performance”. Kantar Worldpanel believes online could account 10-15% of share of grocery spend in the next 10 years. “It’s inevitable the online channel will grow, especially for main shops, but only if the logistics are sorted,” notes Alison Martin. Retailers around the world are working on their local logistical solutions, such as variations on clickand- collect. In emerging markets, ‘bancarisation’ (extending banking facilities to consumers) will make ecommerce accessible to millions, but poor infrastructure, delivery fees and trust in the refrigeration chain remain the barriers.