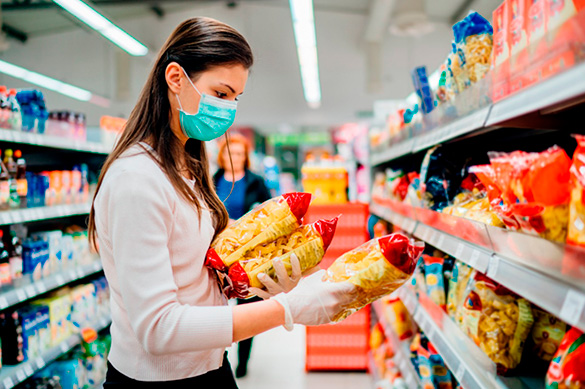 Spaniards made 18.3 million fewer purchases in the week of 16-22 March compared to the previous week. Their weekly expenditure however was similar to the first eight weeks of the year. Looking at the same week in 2019, sales have grown by 10.5%.

After the declaration of the state of emergency and its restrictions, people have been leaving their homes as little as possible and making fewer trips to the shops, but during these visits they are spending more compared to the previous week.

Over 65s, one of the most vulnerable groups, drastically reduced their purchases after the state of emergency was announced. Expenditure for this age group fell by 18% compared to the weekly average, which resulted in 11.2 million fewer trips across the whole of Spain. Following the trend of the previous week, young adults continued increasing their expenditure, although at a lower rate.

The lockdown has also led to a change in the channels where consumers do their shopping. In the week of 16-22 March, there was a shift to the online channel, which grew to a 2% market share, a record for the online purchase of mass consumer goods.

In line with the previous week, the Spanish shopped locally during the first week of lockdown, which was particularly beneficial to smaller supermarkets, netting a 28% share of the market. Regional supermarkets grew market share by 1.7 percentage points in a week, 3 points above their weekly average. Among the retailers, the big winner was the DIA Group which grew to 6.8% (+0.2 pp vs. the previous week). Meanwhile, the market share of superstores such as Carrefour and Alcampo has fallen due to the rise of local shops.

The fact that the Spanish have shopped more locally, where own label brands have a lower profile, has meant that the brands of the leading manufacturers have grown by 6%, a notable increase given that in previous weeks both producer and retailer brands were much more evenly matched.

During the quarantine, Spaniards have been changing what they eat and do at home. After the supply-based purchasing during the first few weeks of the Coronavirus crisis, the rates of purchase in the categories of non-perishable fresh produce, perfumery and hygiene, and baby products saw the greatest downturn. Fresh produce has returned to shopping baskets, bouncing back by 6% (48.6% vs. 42.6% the previous week), while the stockpiling of food and beverages has stabilised.

Although we note that the consumption occasions in the home are growing by 25%, this increase varies greatly by category. Spaniards have increased their consumption of pre-cooked meals and easy-to-make foods over that of rice and bean-based dishes, those they are still well-stocked with at home.

Within packaged foods, categories more closely related to baking, such as flour, butter, margarine, sugar and cream, have notched up the greatest growth, in line with new habits among Spaniards during the confinement, who say they are making more baked goods. These are followed by basic categories such as beans, conserves and rice. In the beverage category, beer has seen the highest growth (+23%), followed by high-alcohol content beverages (+17%).

By spending more time at home, in the case of baking, we seek out pleasure foods rather than healthy ones, and it’s one of the most popular activities to do as a family. In the case of alcohol, home is now the place to have our vermouth and a pint.

Being at home more has led to many getting down to some serious cleaning and tidying. In household goods, kitchen gloves and bleach are still the best-selling products, tripling and doubling their sales, respectively. In perfumery and hygiene, due to the new health recommendations, the sale of hand soap has doubled during the week analysed, and after the closure of hair salons, the purchase of hair colouring has also seen an increase (+8%). As for other cosmetics categories, such as fragrance and make-up, these took the greatest hits after the closure of perfume chains and changes routines since the quarantine.

Out-of-home consumption shrinks to 20% of its normal size

With Spaniards staying at home and restaurants closed to the public, out-of-home consumption has shrunk to 20% of its normal size, principally consisting of delivery services (which has retained two out of every three orders, particularly for food), and shops such as petrol stations, tobacconists and vending machines.

For the coming weeks, we estimate the rise in local purchasing will continue, and that consumers will gradually be shifting their increased expenditure from basic goods to complementary pleasure-oriented products.