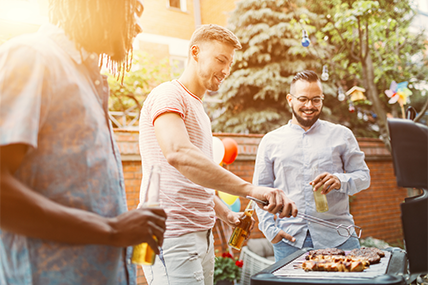 National BBQ week returns for its 22nd year running and once again marks the annual celebration of better barbequing.

As mentioned in our latest Meat, Fish and Poultry update  the recent mini heatwave and an earlier launch of barbecue lines has helped to boost fresh processed meat and poultry. And as Europe’s leading lovers of BBQs, Brits lead the way with consumers spending an average of £4.15 compared with £1.76 for an average evening meal.

Weekend BBQs account for the majority of our consumption, however, the weekday occasion is becoming more and more frequent, as consumers favour both the ease and speed of creating meals on the barbeque.

As you might expect, the vast majority (97%) of meats that are put on the BBQ are not pre-cooked but that said, only 1% of all specific BBQ products actually make it onto the coals. Interestingly, at least 15% of consumers shop for their BBQ meal across both the fresh and frozen aisles.

Although 80% of burgers sold over the summer are the classic beef variety,  vegetarian burgers are gaining popularity with £11.7 million spent on them in the 12 weeks to July 2017. This is 20% more than what was spent on this category for the same period last year.