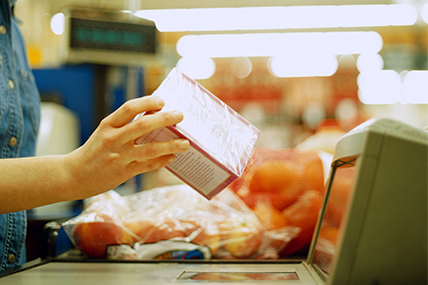 The recovery of branded sales began in late 2017 and has continued apace in the new year.

David Berry, director at Kantar Worldpanel, comments: “The recovery of branded sales began in late 2017 and has continued apace in the new year.  Sales of brands are up 4% year on year as shoppers parted with an additional €49 million on their favourites during the past 12 weeks.  This is the first time in four years that brands have posted stronger sales growth than their own label counterparts, with alcohol, baked goods, frozen food and toiletries performing best.”

New year health kicks were in evidence as spinach, berries and avocados continued to grow in popularity.  Sales were up by 46%, 19% and 6% respectively year on year.  David Berry continues: “Shoppers’ increasing interest in vegetarian and vegan lifestyles was clear as sales of vegetarian options surged by 18%.  One in five shoppers picked up a vegetarian product during the past 12 weeks.  Winter also brought its fair share of sniffles: sales of cough sweets and liquids increased by 9.5% and vitamin supplements saw a 14% increase year on year  as shoppers tried to bolster their immune systems.”

Among the retailers, Dunnes remains in pole position, capturing 23.2% of shoppers’ grocery spending.  Sales growth for the retailer has remained strong, with Dunnes posting an increase of 5.7% compared with this time last year.  David Berry explains:“Loyalty continues to define Irish grocery, with shoppers now less likely to shop around and committed to spending more with their retailer of choice.  Dunnes has capitalised on this trend, successfully counteracting lower footfall with higher spending from its existing customers.”

In second place, Tesco is just behind with a 22.7% share of the market and a comparable sales increase of 4.8%.  This is the tenth successive month that the retailer has enjoyed sales growth, boosting market share by 0.3 percentage points year on year.

Performance for SuperValu remains consistent, with sales growth of 2.1%.  Dublin yielded the strongest results for the retailer, with the supermarket managing to increase its market share in a region where it was traditionally under represented.

Lidl continues to enjoy a strong performance, with sales growth of 4.6% boosting market share to 10.5%.  Aldi has seen a slight dip in sales, with market share now standing at 10.3%.

Meanwhile, Iceland – which currently holds just 0.6% of the Irish grocery market – is gaining a foothold in the frozen aisle.  David Berry explains: “Helped by store openings in 2017 – the retailer opened its twentieth Irish outlet on 23 January – the grocer has managed to increase its share of frozen food sales from 4.3% to 6.0% year on year during the past 12 weeks.”