The latest grocery share figures from Kantar Worldpanel, published today for the 12 weeks ending 26 April 2015, show supermarket sales have slowed to a revenue growth of 0.2% compared to last year.

Fraser McKevitt, head of retail and consumer insight at Kantar Worldpanel, explains: “Growth in the market has declined thanks to a record low for grocery price deflation: a typical basket of everyday items is now 2.1% cheaper than it was in 2014. Lower costs are the result of both falling commodity prices and the ongoing supermarket price war, with all major retailers offering cheaper like-for-like goods.

“This is good news for consumers, saving the average household £20 in the last three months. But many of the country’s largest grocers have struggled to enjoy substantial growth, with lower prices taking £532 million out of supermarket tills.”
More shoppers through the door have helped Sainsbury’s to be the strongest performer among the ‘Big Four’, despite a 0.2% fall in sales. Growing slightly behind the market, its share now stands at 16.5%, down 0.1 percentage points on last year. Performance has been boosted by the increased focus on non-food items and the chain’s strength in London, where grocery sales are growing faster than elsewhere in the country.

Fraser McKevitt continues: “German discounters Aldi and Lidl continue to be the fastest growing retailers, up by 15.1% and 10.1% respectively. Both are rewarded with new record high market shares: 5.4% for Aldi and 3.8% for Lidl. While such growth is the envy of the industry it is slower than in recent months, suggesting the discounter momentum is starting to slow a little."

Sales at Morrisons declined by 1.1% on a year ago, while at Tesco they fell back by 1.0%, taking market share to 28.4% – a decline of 0.4 percentage points compared to a year ago. Apart from the discounters only Waitrose has seen an increase in sales, up 1.5%. The Co-operative saw sales fall by 1.0% but did slightly increase footfall, as the business tries to exit larger format supermarkets to concentrate on its convenience business. 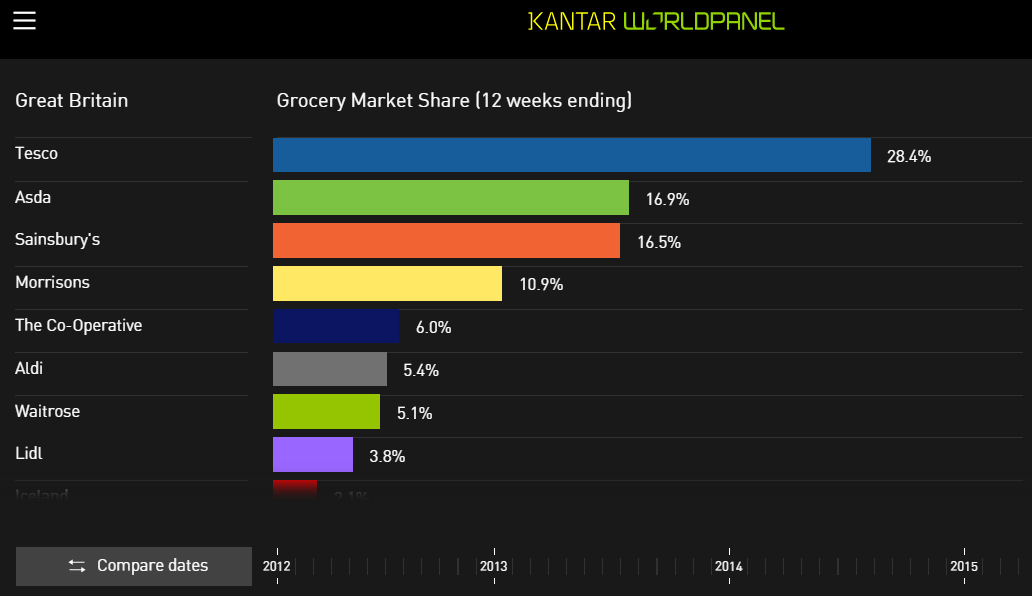