The latest grocery share figures from Kantar Worldpanel, published today for the 12 weeks ending 11 September 2016 show that despite continued deflation of 1.1%, supermarket sales increased by 0.3% with particular growth in alcohol as shoppers celebrated Britain’s summer of sporting success.

Fraser McKevitt, head of retail and consumer insight at Kantar Worldpanel, comments: “While overall sales growth has been slow, consumers have been keen to celebrate Britain’s Olympic and Paralympic golden summer, boosting alcohol sales by 8.5% in the past four weeks. Sparkling wines including Prosecco and Champagne led the way with growth of 36.0% as promotional events across a number of retailers successfully tapped into the nation’s celebratory mood.

“Tesco’s summer ‘Drinks Festival’ helped grow its alcohol sales faster than any other major category, and while the retailer’s sales have not yet returned to growth, a decline of 0.2% year-on-year is its best performance since March 2014. This period its Extra and larger stores delivered a positive contribution to performance, though market share fell back by 0.1 percentage points and Tesco now accounts for 28.1% of the overall grocery market.”

Fraser McKevitt continues: “Waitrose sales increased by 3.4% on last year, helping the retailer reach a new record market share of 5.3%. It’s ‘Half Price Event’ boosted performance across much of the store – particularly in household and alcohol. However the increase in sales has come at a cost, with Waitrose’s proportion of promotional sales reaching a higher level than some of the traditionally more promotion-focused ‘big four’ retailers.

“Co-op continues to outperform the market with sales growth of 3.1%, primarily through its own label lines. The convenience retailer was another to post strong alcohol sales, though its produce lines were its fastest growing category, helping market share increase to 6.6%.”

Check out our Grocery Market Share interactive dataviz and embed it on your site. 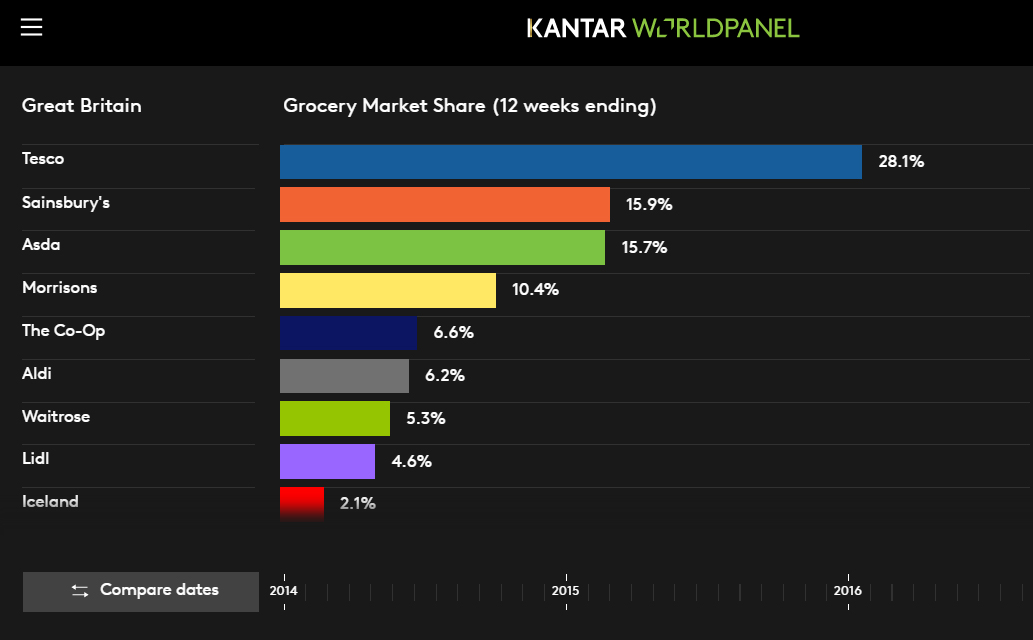 Iceland’s recent run of success continues as sales grew by 6.3% compared with a year ago, with its core ice cream and frozen fish categories particularly over-performing. At Sainsbury’s sales fell by 1.4%, as Fraser McKevitt explains: “Overall prices have fallen at Sainsbury’s, as have its levels of promotional activity as it continues to roll out its simpler pricing strategy. Meanwhile, after posting like-for-like growth in last week’s trading update for the first half of 2016, Morrisons’ market share fell by 0.3 percentage points to 10.4%, reflecting its reduced store portfolio. Online sales are becoming more important for the grocer, with shopper numbers up by 45% on last year.

Aldi and Lidl continue to grow – not only are both continuing to expand their store estates but existing customers are visiting more frequently and upping their basket size. The discounters are helping drive the industry-wide growth in premium own-label lines, with marketing campaigns moving away from showcasing only price to a focus on quality – collectively, premium own label grew by 29.5% in the discounters this period.

Shoppers now spend an average of £19.24 when visiting the discount retailers and at a time of falling prices this increase of 4% is not to be sniffed at.”Lidl reached a market share high of 4.6% this period having grown by 9.5%, while Aldi increased sales by 11.6%.