The latest grocery share figures from Kantar Worldpanel, published today for the 12 weeks ending 17 July 2016, show slow growth for the supermarket sector, with sales up 0.1% compared to last year.

Fraser McKevitt, head of retail and consumer insight at Kantar Worldpanel, comments: “The EU referendum result has had no immediate impact on the prices retailers are charging or the sales volumes consumers are buying over the past 12 weeks. The nation’s average shopping basket is 1.4% cheaper than a year ago, exactly the same level of deflation as reported last month, and it remains to be seen if the Brexit vote will bring about any price rises this year.

“Over the latest 12 weeks beer sales did bring about some cheer for the grocers, growing 2.8%, ahead of the overall market. The impact was mostly felt prior to England’s early exit from the Euro 2016 football tournament, which brought with it a rapid reversal in fortune for beer sales. Beer and lager were also hindered by poor early summer weather, as were barbeque favourites like sausages, which fell by 6.3%.”

Among the individual retailers, sales at Tesco fell by 0.7%. The retailer’s market share declines are now slowing, down by 0.2% percentage points to 28.3% of the market – this is Tesco’s slowest rate of share loss since March 2014 and has been helped by an improved performance from its larger stores.

At Sainsbury’s sales fell by 1.1%, taking market share down by 0.2 percentage points to 16.3%. Fraser McKevitt comments: “Sainsbury’s has followed through on its promise to remove multibuy offers from its shelves in favour of everyday low prices and simple price cuts and less than 1% of its sales now require shoppers to pick up more than one item to feel the benefit of the promotion.”

Newly installed Asda chief executive Sean Clarke saw sales at the grocer fall by 5.6%, with share declining to 15.5%. Fraser McKevitt explains: “Asda is alone among the big four retailers in increasing the proportion of sales made on promotion compared with last year. However, its absolute level of sales sold on a deal remains behind its large competitors, where promotions account for 45.2% of sales.”

Morrisons sales fell by -1.8% – its best results since January this year. These figures still reflect its wave of store disposals in 2015 and their impact on Morrisons’ performance should start to lessen in the next few months. While Morrisons’ overall market share fell by 0.2 percentage points to 10.7%, its premium own-label lines showed strong growth of 3.8% – the best premium private-label performance among the big four.

Growth continues at Iceland, where sales are up 2.8% year-on-year. Co-op increased sales by 2.1% and Waitrose grew 1.6%, with all three retailers gaining market share for the third consecutive period, moving up to 2.1%, 6.4% and 5.1% respectively.

Discounter growth continues, helped by a 5% increase in the number of shoppers visiting either Lidl or Aldi this period. Lidl has reached a new market share high of 4.5% thanks to a sales increase of 12.5% while Aldi, up 11%, increased market share to a record 6.2%. 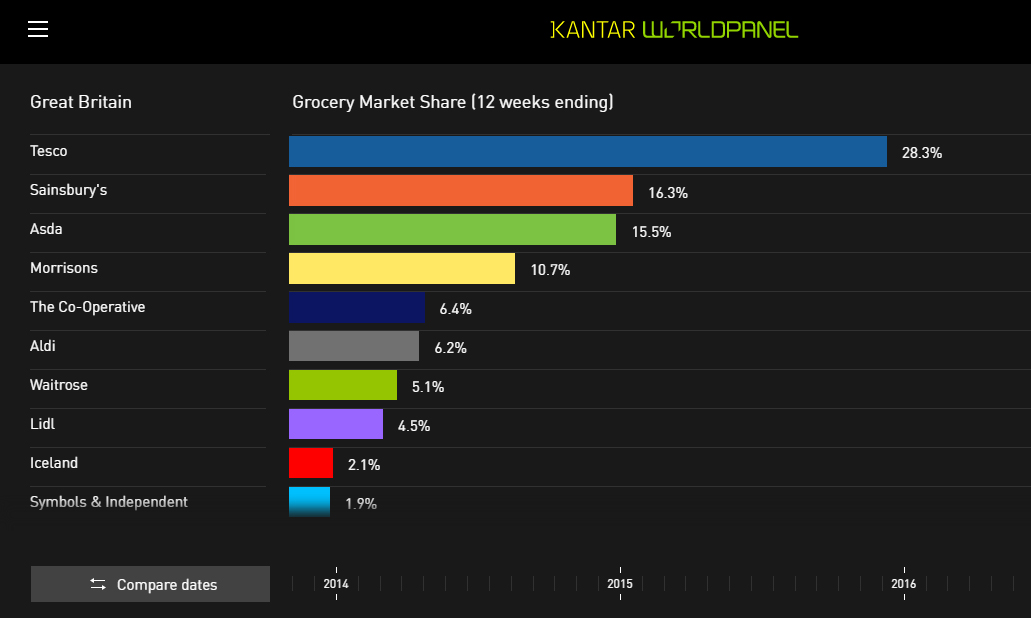