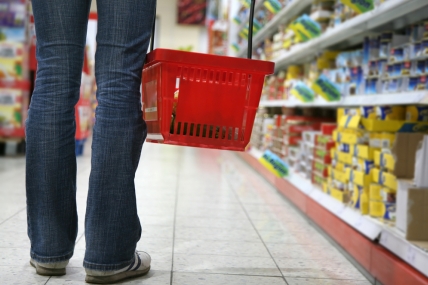 New grocery market data published today by Kantar Worldpanel in Ireland* shows that Irish supermarkets are continuing to capture more of the domestic grocery market at the expense of retailers in Northern Ireland – with their combined share of Irish sales reaching over 88%.

David Berry, commercial director at Kantar Worldpanel, explains: “The continued high cost of fuel and a weaker euro means that fewer shoppers are willing to travel to the north for their groceries and are instead looking for value at home. During the latest quarter only 8% of households in Ireland bought their groceries from Sainsbury’s or Asda in Northern Ireland – contrasting with 16% during the same period in 2009.”

Overall shopper spending remains subdued as a result of the tough economic climate, with the decline in total grocery sales accelerating from a fall of 0.2% last month to a further drop of 0.5% this month. The discounters continue to increase their combined market share – which now stands at almost 12% – as shoppers look for value. Aldi has recorded sales growth of just over 20% – bringing their total share to 5.3%, just 0.2% behind Superquinn. Lidl has also posted substantial growth and now has a 6.5% share for the first time.

David adds: “Tesco and SuperValu also continue to perform strongly, with sales growth of 2.8% and 1.1% respectively. Tesco has grown its share by managing to encourage its shoppers back through the doors more often; meanwhile SuperValu’s drive to recruit new customers to its stores seems to be working.”

Despite grocery sales coming under pressure, the ongoing Euro 2012 championship is boosting the sales of alcohol - with sales jumping by 4.4% over the past four weeks.

**This figure is based on over 75,000 identical products compared year-on-year in the proportions purchased by Irish shoppers and therefore represents the most authoritative figure currently available. It is a ‘pure’ inflation measure in that shopping behaviour is held constant between the two comparison periods – shoppers are likely to achieve a lower personal inflation rate if they trade down or seek out more offers.