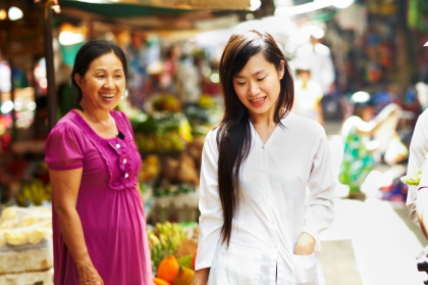 Fostered by a series of price increases in foodstuffs, energy, electricity and petroleum, a negative outlook for Vietnamese consumer power has been foreseen since early 2011. The speed of price increase is now much faster than income growth rate, posing serious risks to consuming capacity. Consequently, consumers tried to manage their different demands to afford the uplift in prices, which shaped an overall saving trend for the whole market.

According to the General Statistics Office, until April 2012, Vietnam Consumer Price Index has increased by 18.7% over the past year. At this speed, price inflation has surpassed consumer income growth. Our research findings show that, after adjusting for the increase in price, consumer’s real earnings in urban 4 key cities (HCM, Hanoi, Danang and Cantho) and rural areas fall by 3.6% and 1.7% respectively. This reminds us of the remarkable price hike in 2008 when price increased at a rate of 23% per year whereas income was struggling to grow by 8%.

Strongly bouncing back since the end of 2010 at 2-digit speed, high inflation has put a heavy impact on the economic landscape and influenced everyday life of millions of people all around the country as well. Our research findings show that FMCG (Fast moving consumer goods) typical basket’s Price Index has increased by 44% since 2009 while Household Income Index tried hard to follow at 34%. In rural areas, the numbers are 40% and 33% respectively. Vietnamese consumer power squeezes as inflation filters into the cost of daily life. As a result, in urban areas, FMCG volume growth rate has dropped from 11.1% annually in 2010 down to the nearly-zero 1.2% in 2011. The scenario is brighter in rural areas yet threats are still there since this is the first time in the last 3 years, price inflation has surpassed consumer income growth in rural Vietnam.

Price sensitivity and providence become common shopping attitudes among consumers. The lower household income, the more sensitive to price they are these days. According to Kantar Worldpanel Lifestyle Survey, three out of every four urban household work to a strict budget when they do grocery shopping. In addition, more than half of urban consumers are confident that they know when a promotion price is a good price. Besides, consumers turn out to be more and more provident about the future, which is clearly shown via their expanding wallet share of savings from 11% in 2010 to 13% in 2011. “I save for harder time rather than spend now to make life easier” is the shared tactic of more than 60% urban housewives. This is especially true to lower income groups whose daily life is strongly affected during such hard time.

Confronting recurrent price hikes, urban Vietnamese consumers reorganise their FMCG shopping behaviour by rationalizing their spending on the bare necessity consumer goods categories in order to afford soaring prices for the packaged groceries such as cooking oil, sauces, and instant noodles. In 2010, an average household spent only one fifth of their FMCG budget for packaged grocery. One year later, it costs them up to nearly one quarter and, at the same time, pushing other not-quite-necessary categories to shrink themselves to fit in the tight budget under price hike times. However, the largest part is always dairy and chilled food, which accounts for more than one third of urban FMCG spending.

Apart from rearranging their share of wallet, consumers also drop some products off their basket. Our research findings show that non-food categories such as personal care and household care were those which suffer the most from this trend. For instance, less basic categories for in-home consumption such as glass cleaner, air fresher, shaving foam, lipstick and hair-styling seem not to stay high on the shopping list, or worse, to be left out when necessary.

Bulk buying – the fact that consumers go shopping for FMCG less frequently, yet increasing their trip size – is also observed as another reaction of consumers during inflation time. In addition, smart consumers go for big pack sizes as an economical solution to their annual basket. According to our Lifestyle Survey, nearly two third of urban housewives agree that “I will buy bigger pack size because the price is usually less expensive”. As a result, more and more households are heading for big pack sizes when they go shopping for FMCG products. However, this does not mean that consumers just go out to their favorite stores and pick up the biggest packs available. According to Kantar Worldpanel Lifestyle Survey, 56% consumers agree that they often look at the price per kilo/liter, not just the pack price!

However, not all consumers have the same reaction towards inflation: if the majority of the consumers are buying smart with bulk-buying pattern, down-trading trend is found among low-income shoppers, who are switching to more affordable solutions. This group is seeking for both lower prices and smaller pack sizes disregarding the relatively lower quality. One of the most noticeable reactions of those shoppers towards high inflation is buying shampoo and hair conditioner in sachets instead of bottles. They also choose powder detergent of low price brands or private labels in replacement of mainstream ones.

In order to sustain the growth during inflation time, “value for money” should be the key message that manufacturers and retailers should strongly hold, because that is what consumers are looking for. In addition, consumers are not homogeneous. Just like two faces of the same coin, there are different consumption trends happening at the same time in FMCG market. While low income consumers focus on different tactics to manage their spending including seeking for cheap prices, the upper class may not find themselves so strongly affected by high inflation and remain a better-value-for-money attitude in their sophisticated choices. Therefore, the key to success lies in the flexibility in understanding and adapting different demands of different consumer groups.

Moreover, despite the entire price hike and consumer power squeeze, the best part of the story is waiting for its turn as consumer price index has eased down in recent months thanks to a range of measures being adopted by the government to apply the brakes. As a result, shoppers are gaining back confidence recently. Therefore, businesses should also be well prepared to catch the initial signs of recovery and lead the tide.