How the French food market changed in 2019 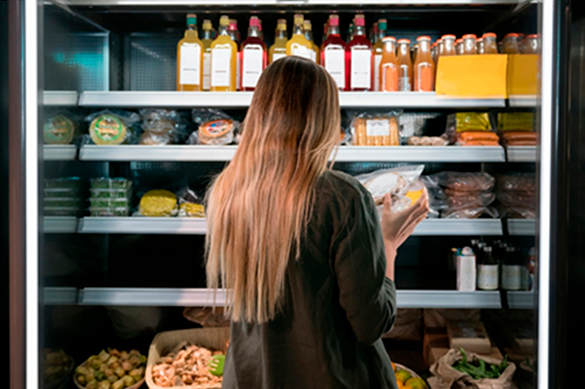 In France a falling birth rate over the last five years, together with an ageing population, has resulted in a drop in food consumed at home. But the reasons for reduced consumption overall are more profound than this.

The end of hyperconsumption, a real turning point in 2018, has now taken root with everyone in 2019. French people now know that by eating less they will be more healthy and reduce waste to protect the planet. Some of the markets most affected by the reduction in volume include: make-up (-5%), alcohol (-6.4%), meat (-4%), frozen goods (-3.3%) and baby hygiene (-7.5%).

Impacts of the Egalim law
Egalim law, which is essentially about protecting the food price for farmers, saw its first application in 2019.  It has had a negative impact on food purchases (six fewer promotional items purchased per household*) and expenditure on promotional products, which fell by 6%*. The share of turnover from promotional products is now only 13.7%*, i.e. -1.1 points compared with 2018.

With purchasing power increasing, more and more meals are eaten away from home (+8.5%), in new eating places, which have developed considerably. What is more, 29% of French households now have meals delivered, which represents another source of competition for the traditional channels.

Household expenditure continues to rise, but at a very slow rate with a 2% increase in total FMCG across all channels. Households are choosing more expensive products and prioritising quality over price: 69% are willing to pay more for higher quality products.

But the return of inflation seems to have slowed the food transition somewhat. Although inflation due to the Egalim effect remains contained, it has nevertheless doubled since 2018. Some French people are now using EDMP (predominantly own-brand - formerly discount) stores, chiefly Lidl, which has gained 0.4% market share - the highest gain along with Leclerc.

Egalim also benefits private labels, which have been helped by the promotional slowdown on brands but this isn’t the only reason they are recovering after 10 years of decline. The stores have put their own brands back at the heart of their commercial strategy, focusing on the quality of their products and focusing on popular consumer drivers. These drivers include organic, local, showcasing ‘Made in France’ labels, removing suspect ingredients, using Nutriscore for some of them, and plant products as a replacement for animal proteins. 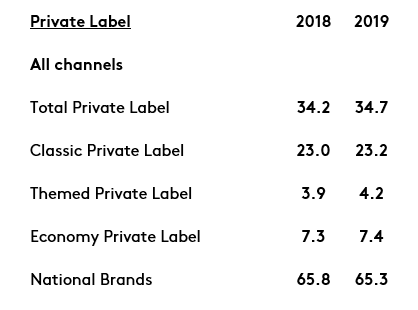 Decline of the “average consumer”

The Gilets jaunes movement, marking a major social divide, has shed light on the fragmentation of French society. Split by level of income, it does not share the same expectations. The emergence of this revolt has also put into glaring focus the famous division between ‘end of the month’ and ‘end of the world’. The end of the “moyennisation” (rise of the middle class) in French society which this has revealed also explains the fragmentation of consumption over the last few years.

End of the world consumers

On the one hand, we see households that are financially comfortable and sensitive to environmental issues: they are looking for organic products but not promotions and are making their consumption a sometimes militant act by advocating deconsumerism. They frequent organic stores, shop through apps such as Yuka (in 2019, 21% of French households used at least one food or hygiene/beauty application). They are eating less meat (they may be flexitarian {34%} or even vegetarian), purchase their products from short food supply chains, e.g. AMAP (Association Pour le Maintien de l’Agriculture Paysanne - Association for the Protection of Rural Agriculture), in specialised stores like Grand Frais or through collaborative platforms such as La Ruche qui dit oui. More broadly, these consumers are supporters of responsible consumption and local produce through alternative distribution channels. They are turning away from traditional hypermarkets and are concerned about the ‘end of the world’.

End of the month consumers

On the other hand, we also find less urban and more modest consumers, who face major budgetary constraints and feel frustration at being forced to tighten their belts: in November 2019, 11% of households stated that they “are unable to cope”. However, they want to consume ‘like everyone else’; clearance stores and discount shops such as Action are taking advantage of this situation and have been very successful. One may remember the stampede for the Nutella super price promotions in Intermarché stores in January 2018. These consumers are concerned about the ‘end of the month’.

For mass consumption stakeholders, the challenge lies in this double bind that they must respond to: addressing consumer diversity and opposing lifestyle models, against a background of social crisis.

This data came from Worldpanel, a sample of 20,000 Worldpanel households, and is calculated on a ‘General goods stores’ range (Hypermarkets + Supermarkets + Hard Discount + Local + Internet), on a set of Fast-moving Consumer Goods and Self-Service Fresh Products (Food, Liquids, Hygiene/Beauty, Cleaning).

Product range = expenditure of ordinary households on FMCG/Self-Service Fresh Products for consumption at home. This data came from a panel and therefore has a probability value.