Kantar Worldpanel, Recognised as a Great Company to Work For 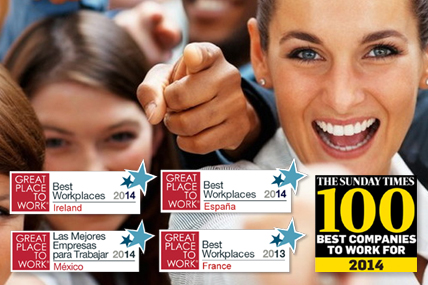 Kantar Worldpanel, the leading agency in consumer and shopper behaviour insights, has been recognised as an employer of choice in the UK, Ireland, France, Spain and Mexico.

In the UK, the Sunday Times Magazine has recognised the company for the 4th year in a row with the prestigious Sunday Times Best Companies to Work For Award. The market research agency was listed 72nd in the 2014 ranking of this prestigious scheme. Kantar Worldpanel Ireland has also been recognised in the equivalent Great Place to Work Ireland competition. This is the first year the company has entered Ireland’s respected listing and it was ranked 11th in Best Small Workplaces in Ireland.

Andrew Fowler, Global HR Director says “I am proud and delighted that Kantar Worldpanel have been recognised in these highly regarded employer awards. The fact that we are the only market research agency to achieve this reflects the investment we continue to make in creating a culture of development and high performance where our talented colleagues can fulfil their potential.”