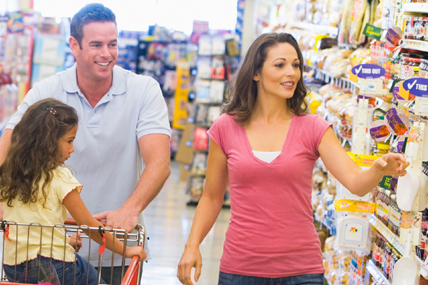 In its fourth annual barometer of the nation’s most chosen FMCG brands, Kantar Worldpanel has revealed that British brands are continuing to outperform their foreign counterparts as six home-grown favourites make up the UK top ten.

The 2016 Brand Footprint ranking measures which brands are being bought by the most consumers, the most often. Bolton-based Warburtons leads the ranking – its products have been chosen by 85.4% of the population, on average 26.7 times a year, meaning it was picked from supermarket shelves 611 million times during the course of the year. The breadmaker has continued to develop new products to widen its appeal beyond standard wrapped loaves and launches including its Thin Bagels range contributing to a 6% increase in consumers’ purchase frequency.

While Heinz remains in second place it declined in both frequency and penetration this year. The brand is currently bought by 89.9% of the population 16.0 times a year but its position in Britain remains ahead of total Europe, where it sits in fourth place.

In third place with a penetration of 88.8% and purchased an average of 14.8 times a year, McVitie’s increased its popularity with shoppers particularly through its flagship chocolate digestives – a strong performance at a time when sales in the overall biscuit category are down.

Hovis is this year’s fourth most chosen brand and the third British brand on the list, having managed to increase both penetration and frequency this year with its ‘Good Inside’ range tapping into the increasing trend for health-conscious consumption. Kingsmill follows it in fifth place with 74.6% of the population buying it 14.3 times a year.

Soft drinks giant Coca Cola retains first place in the worldwide Brand Footprint ranking this year. However, the enduring popularity of domestic brands has led it to slip into tenth place in the British table, with penetration down by 2.9 percentage points this year.

Only Heinz and Coca Cola appear in both the British and European top 10, though the most chosen products across the continent will not be unfamiliar to most consumers – Kinder, Knorr, Activia and Dr Oetker all feature. Globally the top ranking is more diverse – with data from 44 countries and covering 15,000 brands it features a range of FMCG categories including health and beauty, hygiene and cleaning brands.

“British brands remain an important part of our shopper repertoire and it’s encouraging to see so many continue to succeed in a world of multinational conglomerates. This doesn’t just extend to the overall top ten – looking at sector specific rankings we see familiar names including Robinsons, P.G. Tips, Radox and Andrex coming in ahead of their global competitors. With many brands capitalising on the Queen’s 90th birthday celebrations and underlining their British heritage we’re likely to see this trend continue.”

“We are proud to be named as the most chosen brand in the UK for the fourth consecutive year. The last twelve months have been some of the most action-packed in Warburtons’ 140-year history with our mission to bring more excitement to the bakery aisle taking us from our heartland in Bolton to the bright lights of Beverly Hills.

“As we celebrate our 140-year milestone our commitment to providing UK families with innovative, top-quality baked goods that everyone can enjoy remains as important as it was five generations ago. As a family business, it’s not just our top-selling products that keeps us thriving – the support of our people and our customers is what has really helped us grow to become one of Britain’s most-loved brands.”

Kantar Worldpanel’s Brand Footprint Ranking reveals the strength of brands in 44 countries around the world, across the food, beverage, health and beauty and homecare sectors. It uses an insightful metric called Consumer Reach Points which measures how many households around the world are buying a brand (its penetration) and how often (the number of times shoppers acquire the brand).

This unique calculation of penetration and frequency helps FMCG manufacturers to clearly understand their UK and global reach in terms of actual basket reach and provides a vital guide on which regions present the biggest opportunities.