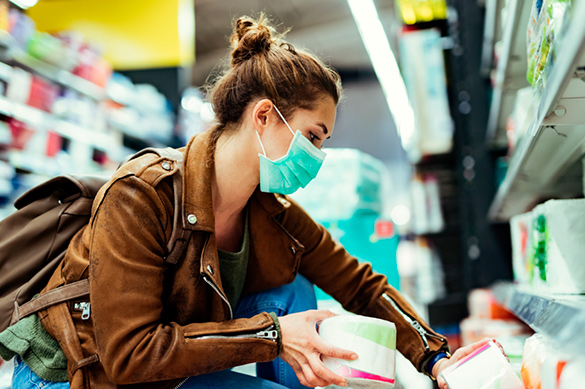 Expenditure on fast-moving consumer goods (FMCG) in Spanish households grew by 25% in the week of 30th March – 5th April compared to before the coronavirus lockdown. The peak in weekly expenditure is the result of a rise in the average transaction value for the fifth consecutive week, reaching a record high of nearly 24 Euros, and an increase in the number of weekly purchases made by Spaniards for the first time since the state of emergency was imposed. Since the beginning of the lockdown the number of trips to the supermarket had gradually declined, however there was a jump of 4.6% in the week of 30 March - 5 April.

Although we’re still far from the pre-crisis average, this increase to nearly 70 million weekly purchases could be due to Easter week. With the closure of shops, even for just a few days, Spaniards stocked up on food, beverages and fresh produce.

Record numbers in the online channel

Online FMCG shopping reached a record high in the third week of lockdown. Despite the fact that the online channel has struggled to meet consumers’ growing demand, e-commerce continues to gain market share, now at nearly 3% share of the market.

The products most purchased via this channel are dry goods, beverages and household items, although this last group took up less space in online shopping baskets in the last week analysed.

As for the in-store channel, regional and local supermarkets, along with the DIA Group and Eroski, gave up some ground for the first time since the onset of the lockdown with the rebound of Mercadona.

Eating during the lockdown, from indulgence to healthy meals

As the lockdown wears on, the number of eating occasions at home has risen and indulgence foods have kept up a notable presence in Spaniards’ shopping baskets. However, in the week of 30th March to 5th April, products such as fresh tuna, honey and snacks have become more prominent. But staying at home has also led to a change in people’s relationship with cooking, as not only are they spending more time in the kitchen, they are also showing greater awareness around food and health. With the crisis, more than half of all Spaniards say they have tried to waste less food than before, while a third have shown interest in eating more healthily, discovering new recipes on the Internet and using more fresh produce.

This behavioural change is very interesting as on the one hand we are leaning towards indulgence and pleasure, while on the other, perhaps due to the lack of physical exercise, but especially because of all the free time we now have, we are opting for healthy food, more elaborate dishes and products that before would probably have expired in the refrigerator.

Our changing habits in cleaning and hygiene

Other consumer habits and behaviour that have most changed during this crisis are related to cleaning and hygiene. During the week of 30 March - 5 April, this category was marked by the widespread presence of home cleaning and disinfectant products, and although the list is still topped by rubber gloves, the presence of food storage products has grown due to the focus on not wasting food.

Despite the fact that many Spaniards have rediscovered their kitchens, during the second fortnight of confinement (30 March - 12 April), home food delivery shot up in Spanish homes, with a 10% growth in orders compared to the period prior to the coronavirus. Orders through the digital channel, via aggregator apps such as Deliveroo, JustEat, UberEats etc, have increased by 38% during the crisis, ahead of phone orders.