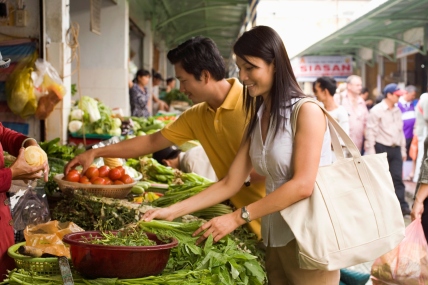 Like almost other countries in Asia, Tet is the most important and popular festival inVietnam. Traditionally, Tet is a special time for family reunions. This is the time when people who work or study far away from their hometown come back and enjoy Tet with their family. Since Tet symbolizes the start of a new year, people work hard all year to save money for this occasion. Tet is also the time when most Vietnamese receive their bonuses - often the equivalent of one month’s salary or more. Hence, Tet is actually the peak moment of consumer spending inVietnam. Around one month before Tet, all Vietnamese people start to prepare for Tet by shopping for food, drinks, new clothes, and new shoes as well as re-decorate their houses because they believe this will bring them a bright year ahead. In the days leading up to Tet, all supermarkets, street shops and markets are full of shoppers.

As per Kantar Worldpanel Vietnam, in 2012, an urban* Vietnamese household spent on average around VND 1,080,000 monthly for fast moving consumer goods (FMCG, including packaged food and non-food goods). Their expenditure during the Tet month reached around VND 2,000,000, almost double - just on FMCG categories. The important role of Tet is also noticeable in rural, where consumers doubled their spending from VND 500,000 monthly to VND 1,000,000 during Tet month.

The growth in Tet consumption is mainly driven by sectors such as confectionary, soft drinks and cooking additives. During this time of the year, the Vietnamese delight their relatives and friends by offering spring flowers, fruits or baskets of purchased goods including coffee, tea, soft drinks, candies, chocolates, biscuits, cashew nuts or even alcohol. Therefore, CSD, Beer, Candy, Biscuits, and Tea are among the top ten growth categories in both rural and urban.

The beverage sector is the key beneficiary of the spending spree brought on by Tet gift-giving, particularly in ‘cans’, ‘boxes’ or premium presentations. CSD is the top growth category in the beverage sector in Tet 2012 in both urban and rural, which performed an increase of over 500% in sales volume in urban and more than 700% in rural, attracting an incremental of 700 thousand urban households and 3.4 million rural households as noticed by Kantar Worldpanel Vietnam.

There is a slight difference between urban and rural households during Tet in terms of beverage consumption. Urban consumers seem to prefer fruit juice and instant tea; whereas rural consumers increase their consumption more for convenient drinks such as RTD tea and energy drink and show more preference towards coffee.

Tet is also the right time for alcohol consumption in both urban and rural. Beer stands at the seventh position in terms of volume growth during Tet in urban with 263% volume increase versus normal month, while in rural, beer is the fifth growing category with 249% volume increase, attracting an expansion of more than 600,000 urban households and 5 million rural households. Interestingly, not only beer, liquor also appears among the top ten growth category during Tet in Rural, with an increase of nearly 100% in terms of in-home volume consumption.

Candies and Biscuits are also among popular categories in terms of gift-giving during Tet, which attracted a huge number of new buyers in both urban and rural in Tet 2012. Candy in rural is an extreme case of the significant uplift in volume consumption during Tet, at more than 1500% - far more than in urban. Chocolate, although not being among the top growth categories in rural probably due to the question of price, is the third in terms of volume sales growth in urban (352% increase), showing a strong preference towards chocolate consumption and gift-giving of urban households during Tet.

Besides beverages and confectionary, cooking additives also enjoy great uplift during Tet. For instance, volume sales of vinegar and MSG grew by 206% and 136%, respectively, in urban, while chilli sauce had an uplift of 118% in rural in Tet 2012.

Most of top growth categories belong to the Food sector, yet we can also witness the appearance of 2 non-food categories in the list of hottest items during Tet: Box tissue in urban and Fabric softener in rural. In the future, it is expected that home cleaning and paper products will enjoy higher growth during Tet as these products offer convenience to simplify the housewives’ tasks and ways to make themselves and their homes more attractive.

In a nutshell, to consumers, Tet is a special time for celebration, consumption and spending in both urban and rural ofVietnam. To manufacturers and retailers, Tet is the right time to speed up the growth of the business, by taking advantage of the impact of Tet on consumerism inVietnam.