The latest grocery share figures from Kantar Worldpanel, published today for the 12 weeks ending 16 August 2015, show continued sluggish growth in the British grocery market with an increase in sales of 0.9% compared to one year ago.

Fraser McKevitt, head of retail and consumer insight at Kantar Worldpanel, comments: “Industry growth of around or below 1% has now persisted since summer 2014 and has become the new normal. Despite the accelerating British economy like-for like grocery prices are still falling, with a representative basket of everyday items now 1.7% cheaper than in 2014.”

Thanks to recent efforts to create a more premium image for frozen food, as well as new store openings including its Food Warehouse format, Iceland is attracting more shoppers through the door than last year. Sales are up by 3.4% as a result, though market share remains flat at 2.0%.

Waitrose has had another successful period, with its ‘Pick Your Own Offers’ promotion helping to drive growth of 3.7%. For the second month in a row there is also growth at the Co-operative, with sales at the till up by 1.1% compared to last year.

Fraser McKevitt continues: “It’s been another successful period for the discounters, with growth at Aldi accelerating to 18.0%. Lidl’s sales have also risen, up 12.8%, taking its market share to a new high of 4.1%.

“As anticipated, Asda has retaken its position as Britain’s second largest supermarket, despite a fall in sales of 2.5% and a 0.6 percentage point fall in market share. The retailer’s greater focus on non-food items means its market share is traditionally higher in the summer, and it’s expected that Sainsbury’s will again become the number two retailer towards Christmas.”

Sainsbury’s is the only one of the ‘big four’ retailers to have seen an increase in sales, which are up by 0.1% – its first growth since March. Growing slightly behind the market, Sainsbury’s year on year share has fallen by 0.1 percentage points to 16.3%.

Sales at Tesco fell by 0.9% and the retailer now holds 28.3% of the market. Buoyant growth in the convenience stores and online has not been enough to offset lower revenues in the larger shops. Morrisons’ increased decline of 1.1% this month reflects a tougher comparison against last year, when a widespread voucher promotion was in place. 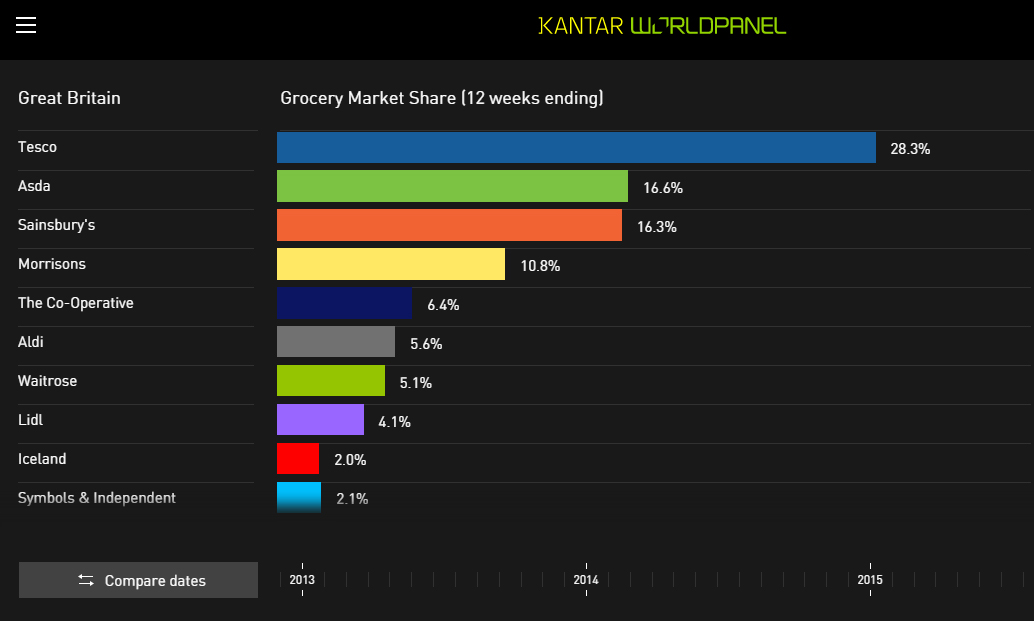 An update on inflation
Grocery inflation now stands at -1.7%* for the 12 week period ending 16 August 2015. This means shoppers are now paying less for a representative basket of groceries than they did in 2014. This is a greater fall than the -1.6% reported last month and means that prices are falling faster than they were previously. Falling prices reflect the impact of Aldi and Lidl and the market’s competitive response, as well as deflation in some major categories including eggs, bread and tea.