Co-Operative back in growth ahead of British grocery market

The latest grocery share figures from Kantar Worldpanel, published today for the 12 weeks ending 19 July 2015, show a slow growth in the British grocery market. Overall sales have increased by 0.8% compared with a year ago, with stronger growth being enjoyed by the smaller retailers.

Fraser McKevitt, head of consumer and retail insight at Kantar Worldpanel, explains: “The Co-operative has returned to growth for the first time since July 2014, increasing its sales by 1.0%. The Manchester-based grocer’s focus on its convenience offer has been rewarded with an increase in shopper numbers, which have risen by 133,000. While The Co-operative’s growth is slightly ahead of the market, its overall share of 6.3% has remained the same as last year.”

Despite a fall in sales of 0.3%, Sainsbury’s has edged its market share of 16.5% ahead of Asda, which now stands at 16.4%. Sainsbury’s has returned to its position as the nation’s second largest supermarket for the first time since January, boosted by non-food sales, its Sainsbury’s Local outlets and faster market growth in the south of the country, where it operates a larger number of stores.

Growth has accelerated at Waitrose, where sales have risen by 3.0%. Customers have taken advantage of the recently introduced ‘Pick Your Own Offers’ initiative to push market share up to 5.0%, an increase of 0.1 percentage points compared with last year.

Fraser McKevitt continues: “The continued slow growth of the overall market can be explained by minimal volume growth and lower like-for-like prices, both as a result of cheaper commodity prices and the fierce competition between supermarkets. Comparable groceries are now 1.6% cheaper than a year ago, meaning prices have been falling since September 2014, although they are projected to start rising again by early 2016.”

Aldi grew by 16.6% while Lidl saw growth of 11.3%, meaning both have moved to new market share highs of 5.6% and 4.0% respectively. Morrisons was the best performer among the ‘big four’ retailers, although sales fell back by 0.1%. Meanwhile, sales at Tesco fell by 0.6% and at Asda by 2.7%. At Iceland sales were up by 3.0%, coinciding with its recent ‘Power of Frozen’ advertising campaign. 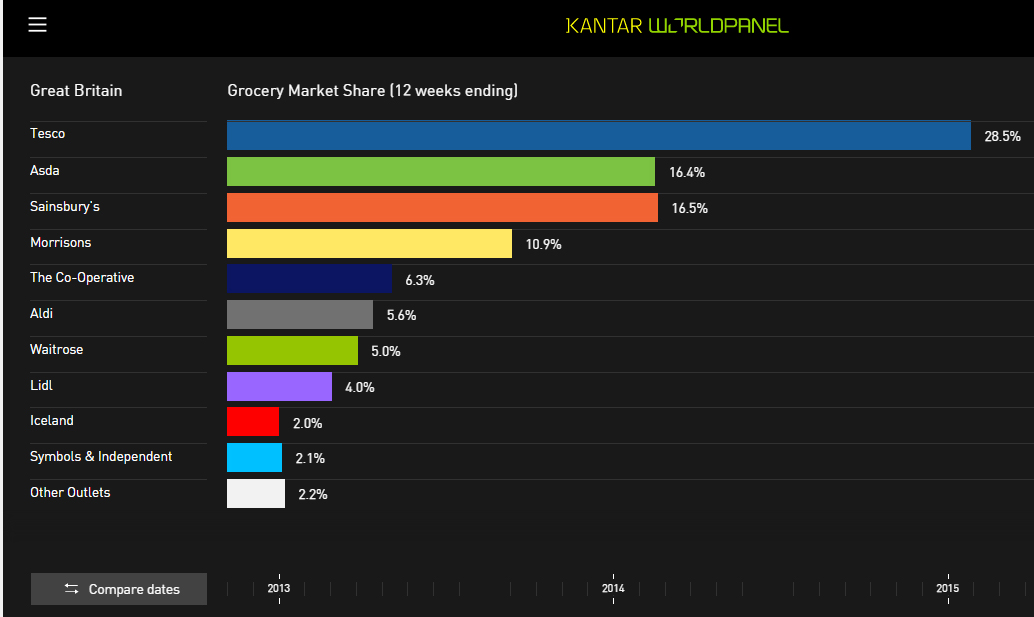