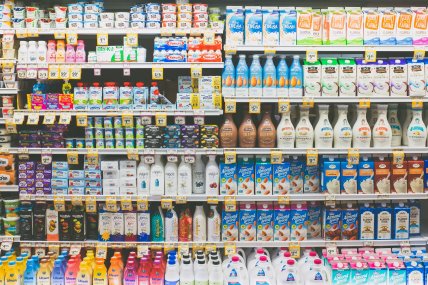 The dairy market saw a slight slow down in growth in the 12 weeks to 10 September 2017, down from 4.4% to 3.7% year on year. Growth was slightly slower than the total grocery market which grew at +3.8% over the same period, though ahead of fresh and chilled. Dairy is still growing faster than both these sectors in volume terms however (+2.1% vs 0.9 and 1.1 respectively) despite rising prices in the market.

Yoghurt sees the biggest drop off in year on year growth compared with last period, down to £11m from £20m, as the rate of new shoppers slowed. This is followed by milk, which grew £19.5m, down from £25.5m. In contrast with most dairy sectors, cream is growing at the same rate as last period while cheese has accelerated.

Among the retailers, the slow-down in dairy is driven almost entirely by shoppers buying less in Tesco, Sainsbury’s and The Co-Op. Looking at yoghurt, Lidl is the only retailer to have increased growth.

The negative impact of temporary price reductions and Y for £X deals – which have consistently been in decline for a number of periods – has worsened without being offset by increasing full price sales. In yoghurt this dynamic is more marked as sales on promotion move into decline and full price sales growth falls by £4.5m.

In terms of shoppers, the majority of reduced uplift in dairy spend has come from retired shoppers, and is evident among shoppers from all social groups except those on lowest incomes (Ds). Yoghurt sees its negative step change across all shopper demographics.