Donât over-look the over 65s 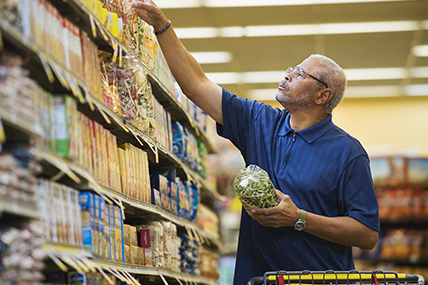 As the UK’s elderly population continues to grow, the ONS has forecasted that those aged 65 and over will increase their share of the total population from their current 18% to 22% by 2030. As such, it has become ever more important for manufacturers to understand the consumer behaviour of the over 65s.

Health is a key driver for the over 65s market, and is becoming increasingly important to them, in contrast with those under 65 who have declining engagement with health - down 1%. For those aged 65 plus health accounts for 39% of food servings and this is increasing (up 2% year on year). Engagement with positive health benefits of food and drink choices is driving this, with consumption for ‘health benefits’ such as fibre and vitamins growing 5% since 2016.

For the over 65s, health is made a priority at the start of their day; with 33% of ‘health’ servings taking place at breakfast. This is reflected in their food choices, with fruit, porridge and eggs among the top breakfast choices. Preserves, morning goods and cereal bars are being chosen less often. For this group, breakfast is a functional occasion, with almost 60% of the breakfasts being described as ‘planned’ or ‘fuelling’.

Whilst over 65s are more likely than the average to prepare their food in the microwave, there appears to be a recent shift toward oven cooked meals (up 4% on 2016) as microwaved meals see slight decline. We also see that ease of preparation is now favoured over speed of preparation - up 3% from 2016.

The over 65s are the most important group for hot drink consumption (accounting for 38% of all occasions). However, it appears even they are not totally immune to the rise in consumption of cold drinks. For the first time, cold drinks are bigger than hot drinks at a total level, with increased water consumption playing a huge role.  As we get older, our penchant for hot beverages increases, however in reality cold drinks have done a better job at tapping into older consumer needs- with their cold drink consumption up 3.5% over the last 5 years. Hot Drinks are thus losing ground with their core consumers and consumption is flat at 0.3% over the same period.