Aldi and Lidl reach 10% of the British grocery

The latest grocery share figures from Kantar Worldpanel, published today for the 12 weeks ending 8 November 2015, show the combined share of discount retailers Aldi and Lidl has reached 10% of the British grocery market for the first time.

Fraser McKevitt, head of retail and consumer insight at Kantar Worldpanel, comments: “If you look back as recently as 2012 Aldi and Lidl only held a 5% share of the market, and it had previously taken them nine years to double their combined share from 2.5%. In the last 12 weeks the two retailers have attracted another additional million shoppers compared with last year while average spend per trip has increased by 4% to £18.85, which is 78p ahead of the total retailer average. The discounters show no sign of stopping and with plans to open hundreds of stores between them, they’ll noticeably widen their reach to the British population.”

Lidl’s market share reached a new record high of 4.4%, increasing by 0.7 percentage points on last year thanks to a sales growth of 19%. Aldi grew sales by 16.5%, keeping its market share at 5.6% for the fifth consecutive month.

Despite the ever more high-profile Christmas advertising campaigns launched by the supermarkets in recent weeks, the overall market remains slow. Sales were only up by 0.5%, held back by persistently falling prices which remained down by 1.7% on a like-for-like basis.

Fraser McKevitt continues: “Sainsbury’s has seen its fourth consecutive period of growth, flying in the face of tough market conditions. It’s 1.5% increase in sales was sufficiently ahead of the market for the retailer to increase its share by 0.2 percentage points – the first share gain registered by any of the ‘big four’ retailers since October 2014.

“Sainsbury’s performance means it has once again regained its position as Britain’s second largest supermarket, pushing ahead of Asda in the latest 12 weeks. The food-focused retailer traditionally increases its market share over Christmas, so we can expect to see it keep hold of second place for the time being.”

Sales fell at the rest of the major retailers – at Tesco they were down by 2.5% while Morrisons saw sales fall by 1.7%. With a raft of recent announcements including a range reduction and increasing click-and-collect opportunities in its stores, Asda will be looking to improve upon its decline of 3.5% in the coming weeks.

Growing revenues this quarter were Waitrose and the Co-operative, where sales were up by 2.7% and 1.5% respectively. The Co-operative’s market share gain of 0.1 percentage points to 6.3% is its first year-on-year share gain since 2011, when the benefits of the Somerfield acquisition were still being felt.

An update on inflation
Grocery inflation now stands at -1.7%* for the 12 week period ending 8 November 2015. This means shoppers are now paying less for a representative basket of groceries than they did in 2014. This is the same fall as reported last month. Falling prices reflect the impact of Aldi and Lidl and the market’s competitive response, as well as deflation in some major categories including eggs, butter, bread, crisps and fresh poultry. 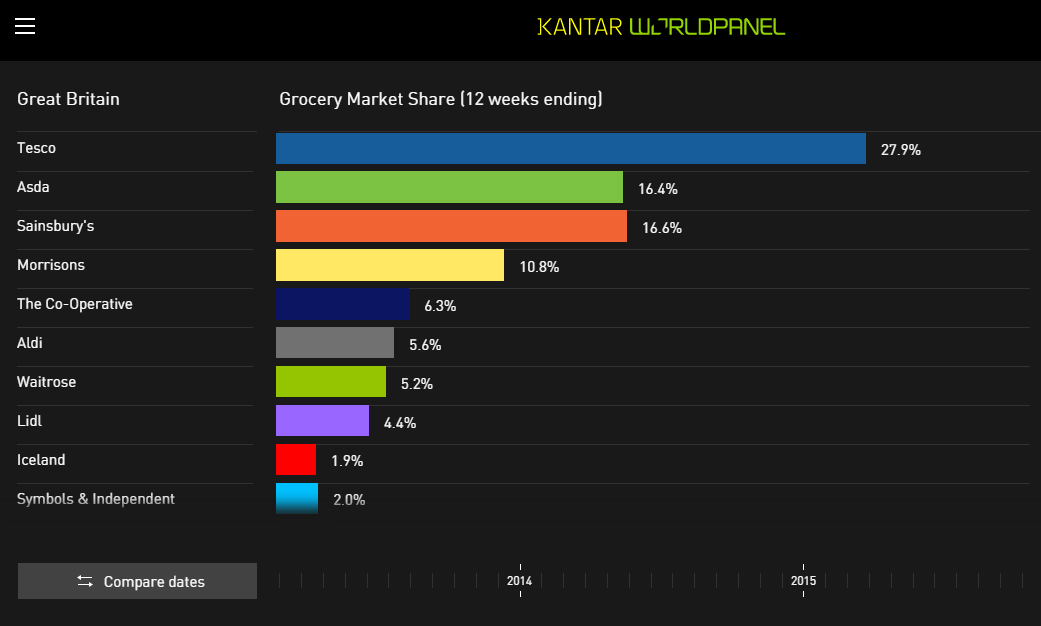