The latest grocery share figures from Kantar Worldpanel, published today for the 12 weeks ending 13 September 2015, show supermarket growth static at 0.9% – this is the sixth consecutive month that sales among the grocers have grown by less than 1%.

Sainsbury’s, which is currently urging consumers to ‘twist your favourite’ recipes, was the only one of the ‘big four’ retailers to keep pace with the market, as the ongoing price war continues to help shoppers reduce their grocery spend.

Fraser McKevitt, head of retail and consumer insight at Kantar Worldpanel, explains: “Sainsbury’s has grown sales by 0.9% compared with a year ago, attracting 250,000 new shoppers through the door in the last 12 weeks. The retailer has held its share steady at 16.2%, helped by the continued expansion of its Sainsbury’s Local outlets.

“Tesco has also increased revenues through its Express convenience stores, although overall sales fell by 1% and market share dropped by 0.6 percentage points to 28.2%. Sales at Morrisons decreased by 1.4%, taking share to 10.7%, with this likely to fall further in the coming months as the recently announced store closures take effect. “

Asda has retained its position as the nation’s second largest supermarket despite market share falling to 16.7%, with sales down by 2.9% compared to a year ago.

Lidl’s sales grew by 16% to reach a new market share high of 4.2%, thanks in part to its successful ‘Lidl surprises’ campaign. Aldi also demonstrated strong sales growth, up by 17.3%, taking a 5.6% share of the market. The discount retailers continue to strengthen their position in the market with some 56% of British households visiting either an Aldi or a Lidl in the past 12 weeks.

There was also success for Iceland, Waitrose and the Co-operative, which saw sales growth of 3.4%, 2.9% and 1.0% respectively.

Fraser McKevitt continues: “With shoppers moving their custom away from the traditional, larger-size supermarket stores, online sales are continuing to boom and are up by 12% compared with a year ago. Almost 7% of grocery sales are currently purchased through the Internet and existing online supermarkets will be watching closely to see when Amazon Fresh will launch in the UK and whether it will steal market share or grow the online market even further.” 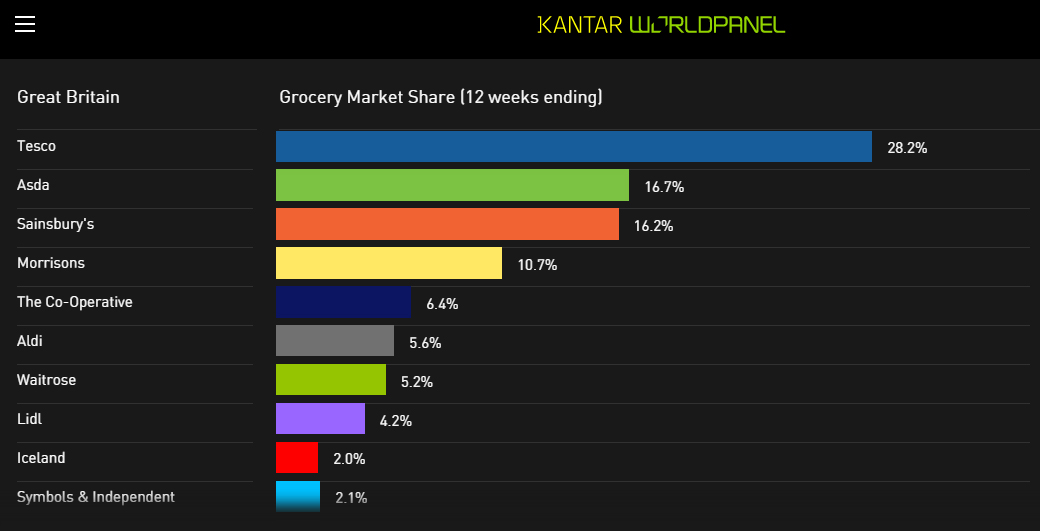