The latest grocery share figures from Kantar Worldpanel, published today for the 12 weeks ending 9 November 2014, show that for the first time since Kantar Worldpanel records began in 1994 the British grocery market has fallen into decline, with sales down 0.2% compared with this time last year. 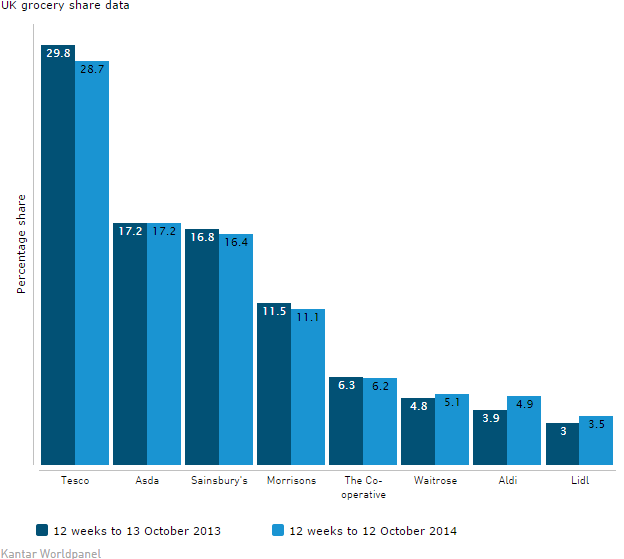 Fraser McKevitt, head of retail and consumer insight at Kantar Worldpanel explains: “The declining grocery market will be of concern to retailers as they gear up for the key Christmas trading season. The fight for a bigger share of sales has ignited a price war which means an average basket of everyday goods such as milk, bread and vegetables now costs 0.4% less than it did this time last year. This is bad news for retailers, but good news for shoppers with price deflation forecast to continue well into 2015.”

Aldi continues to benefit from the disruption within the grocery market. Its sales are 25.5% higher than last year and the retailer now has a record high market share of 4.9%. Lidl has also performed strongly with a 16.8% sales increase bringing its market share to 3.5%. At the other end of the market, Waitrose has grown sales by 5.6% taking share to 5.1%.

The major supermarkets have all had a difficult period, hit by both the flow of shoppers toward the discounters and reduced revenues as they competitively cut prices. Asda has recorded the best performance among the big four. Its sales have fallen in line with the overall market and share has held steady at 17.2%. Sainsbury’s and Morrisons have both recorded a decline in share compared with last year with sales down 2.5% and 3.3% respectively. Tesco’s sales are down by 3.7% although it is worth noting that the rate at which it is losing market share has slowed. 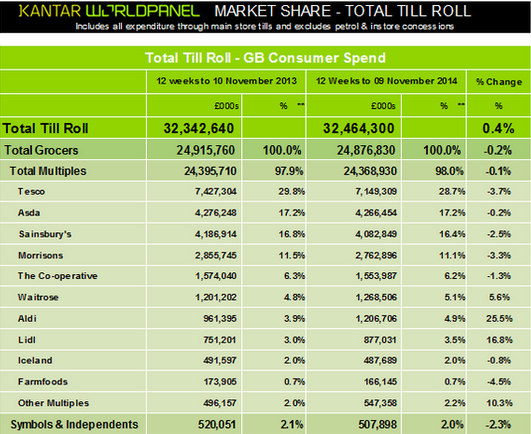 Kantar Worldpanel has launched a new data visualisation tool that allows you to view and analyse Grocery Market Share data online. The latest sales share figures for all of the major grocers can be viewed and compared with historical figures here http://www.kantarworldpanel.com/en/grocery-market-share/

Grocery inflation has seen its fourteenth successive fall and now stands at -0.4%* for the 12 week period ending 9 November 2014. This means shoppers are now paying less for a representative basket of groceries than they did in 2013. This is another record low since Kantar Worldpanel began recording GPI in October 2006 and reflects the impact of Aldi and Lidl and the market’s competitive response, as well as deflation in some major categories including vegetables, milk and bread.