The latest grocery share figures from Kantar Worldpanel, published today for the 12 weeks ending 12 October 2014 show that like-for-like prices have declined by 0.2%*, pushing the grocery market into deflation.

Fraser McKevitt, head of retail and consumer insight at Kantar Worldpanel explains: “While the supermarkets are battling it out on price, the real winners are consumers. Extensive price cutting by some supermarkets in a bid to win the price war means that customers are saving on everyday items such as vegetables and milk.

“While price is a key battle ground among the big four, at the top end of the market Waitrose secured a record grocery market share of 5.2%. Impressively, it has boosted its sales by 6.8% over the past year, continuously growing its sales every month since March 2009.”
Meanwhile at the opposite end of the market, Aldi’s growth slowed slightly compared to recent months, but sales were still up 27% versus last year resulting in a market share of 4.8%. Lidl’s sales grew by 18%, with its market share standing at 3.5%.

Fraser concludes: “We are seeing clear polarisation of the market with both the premium and discount ends of the market gaining share, while the mainstream grocers continue to be squeezed in the middle. Asda has again emerged as the winner among the big four, growing sales ahead of the market, up 1% over the past year, boosting its share to 17.3%. Tesco is yet to see substantial improvement, however it seems it may be turning a corner as sales are down 3.6%, which is the grocer’s best figure posted since June. Meanwhile both Sainsbury’s and Morrison’s sales slipped back, down 3.1% and 1.8% respectively.”

Grocery inflation has seen its thirteenth successive fall and now stands at -0.2%* for the 12 week period ending 12 October 2014. This means shoppers are now paying less for a representative basket of groceries than they did in 2013. This is the another record low since Kantar Worldpanel began recording GPI in October 2006 and reflects the impact of Aldi and Lidl and the market’s competitive response, as well as deflation in some major categories including vegetables and milk. 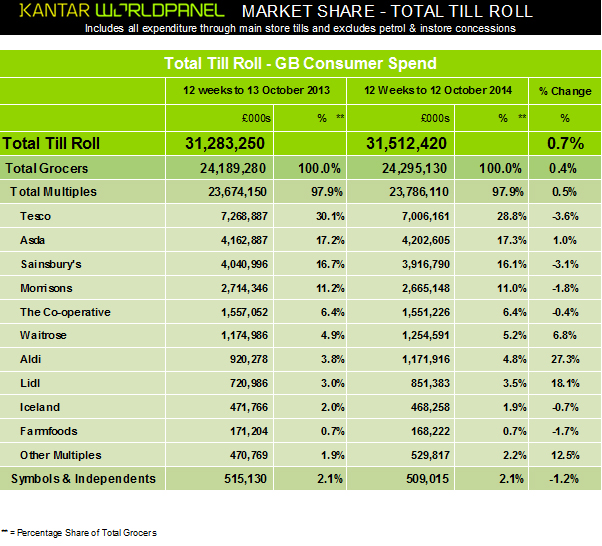 *This figure is based on over 75,000 identical products compared year-on-year in the proportions purchased by shoppers and therefore represents the most authoritative figure currently available. It is a ‘pure’ inflation measure in that shopping behaviour is held constant between the two comparison periods – shoppers are likely to achieve a lower personal inflation rate if they trade down or seek out more offers.