The latest grocery share figures from Kantar Worldpanel, published today for the 12 weeks ending 28 February 2016, show a small increase in supermarket sales which are up by 0.5% compared with a year ago. This is the fastest rate of growth since October 2015 but is still being held back by the ongoing price war and falling grocery prices, which are down by 1.6% – a continuous decline which began in September 2014.

Fraser McKevitt, head of retail and consumer insight at Kantar Worldpanel, comments: “Despite prices continuing to decline, the combination of Valentine’s Day, and consumers stocking up for an early Easter has boosted certain categories. February chocolate sales are up by 13%, cut flowers have increased by 7%, and sparkling wine sales are up by 15%. New Year resolutions to eat more healthily don’t seem to have been forgotten, helping fruit and vegetable revenues to grow by 4% despite like-for-like produce prices falling.”

Across the main retailers Sainsbury’s was again the only one of the big four to increase overall spend. Sales grew for the eighth period in a row, up by 0.5% – this is the longest run of sales growth for any of the four main retailers since March 2013. The grocer has been boosted by strong online sales and its Sainsbury’s Local convenience stores, though its overall share remained flat at 16.8%.

Fraser McKevitt continues: “Tesco’s positive run continues as its overall sales fell by 0.8% – halving last month’s decline of 1.6%. A renewed focus on price promotions has helped stem the flow of shoppers leaving the retailer despite the closure of around 50 stores in the last year.

“Morrisons is also operating fewer stores than last year which continues to contribute to its falling sales – this month down by 3.2% with market share dipping to 10.6%. Online, Morrisons’ sales are growing strongly, a trend set to continue in the coming months as the retailer converts more existing in-store shoppers to its e-commerce channel. Despite being a relative latecomer to online grocery, Morrisons’ forthcoming tie-up with Amazon could provide another boost to the business.”

Compared with the 0.5% growth in the overall market, sales in larger stores have fallen by 2.0% as consumers spend less per average trip in these shop formats. This has disproportionally affected Asda with its large stores, with sales falling by 4% and market share down to 16.2%. Waitrose saw sales growing by 0.2%, maintaining its 5.2% share of the market for the third period in a row.

Across the smaller retailers market share gains were made by the Co-operative, Aldi and Lidl. The Co-operative’s share grew to 6.0% after an increase in shopper frequency contributed to a sales increase of 1.9%. The discounters’ combined share climbed back to the 10% high they reached before Christmas. Lidl’s sales grew by 18.9% and Aldi’s by 15.1%.

With current Sunday trading restrictions up for debate this week we could be on the brink of a change to shopping hours. Fraser McKevitt continues: “In an average week 32% of households visit a grocer on a Sunday. This is considerably fewer than the 46% visiting on a Saturday, the most popular day to shop. When stores could last open for the full day during the 2012 Olympics and Paralympics we witnessed only a marginal increase in the proportion of groceries bought on a Sunday, suggesting longer opening hours won’t necessarily translate into greater sales.” 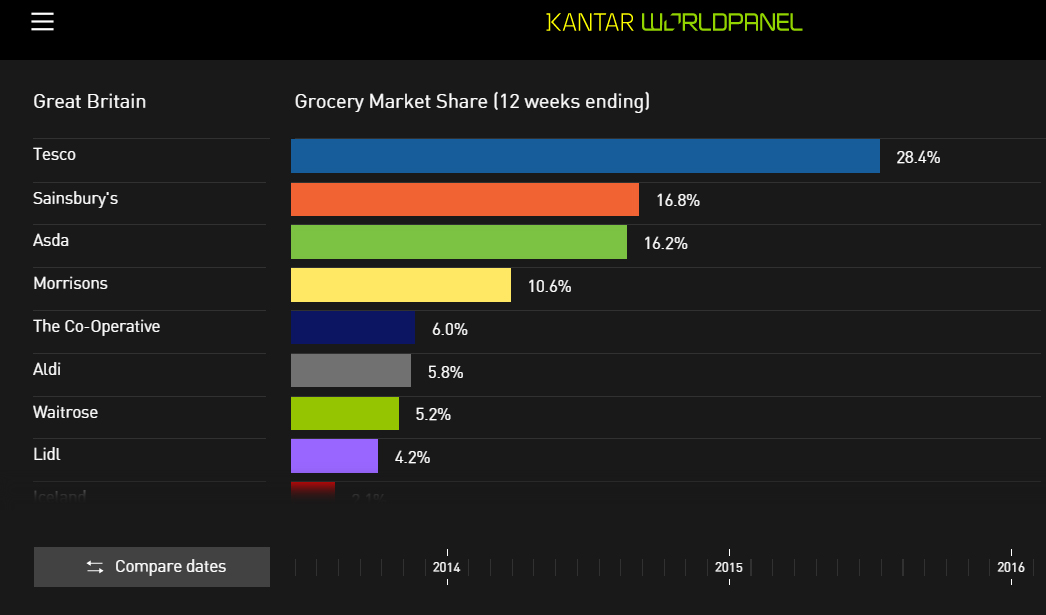