The latest grocery share figures from Kantar Worldpanel, published today for the 12 weeks ending 31 January 2016, show the British grocery market returning to slow growth after a disappointing Christmas period, delivering a take-home sales increase of 0.2%. While the overall grocery market’s growth has been slight, New Year health kicks have contributed to a strong performance across fresh foods.

Fraser McKevitt, head of retail and consumer insight at Kantar Worldpanel, comments: “Consumers are clearly striving for a healthier start to the year and have turned to fresh foods – particularly fruit and vegetables, which have both grown sales by 5%. Given that they’re still experiencing like-for-like deflation it’s a significant revenue growth for both categories, shared across both traditional and discount retailers. Similar growth has been seen in nuts, fresh poultry and fish.”

For the first time since 2011 the Co-operative was the fastest growing non-discounter, increasing sales by 1.4%. The convenience-focused grocer grew its own-label sales by 7%, with sales up fastest in the fresh and chilled part of the store. The Co-operative is the most frequently visited major supermarket – their customers shopped there an average of almost 19 times over the past 12 weeks, compared with a market average of 11 visits. Its market share remains stable at 5.9%.

Meanwhile, recent trends at Aldi and Lidl continue. Fraser McKevitt explains: “Both the discount retailers saw their growth accelerate – Lidl to 18.7% and Aldi to 13.7%. Both saw their share of the market increase by 0.7 percentage points, with Lidl’s rising to 4.2% and Aldi’s to 5.6% – a dip from the 10.0% combined market share high they experienced at the end of 2015. We can expect both retailers to continue to take market share this year as they fulfil their plans for more outlets.”

Sainsbury’s increased its sales for the sixth period in row, growing by 0.6% with a resulting market share increase of 0.1 percentage points to 16.8%. Meanwhile Tesco showed signs of improvement – while revenues fell by 1.6% these are the best numbers posted by the retailer since September of last year.

At Morrisons, the sales decline lessened to 2.2%, while market share fell by 0.3 percentage points to 10.8%. The retailer’s revenues will continue to reflect its disposal of 140 M Local stores and the closure of some larger outlets through the rest of 2016. Asda’s recent announcement of renewed price cuts has not yet had time to materially affect its latest 12 week figures, with sales falling by 3.8% and share falling back to 16.2%.

While Waitrose’s market share remained static at 5.2%, sales increased by 0.1%. This makes it the 91st consecutive period of growth for the retailer – the longest current run of success for any supermarket. 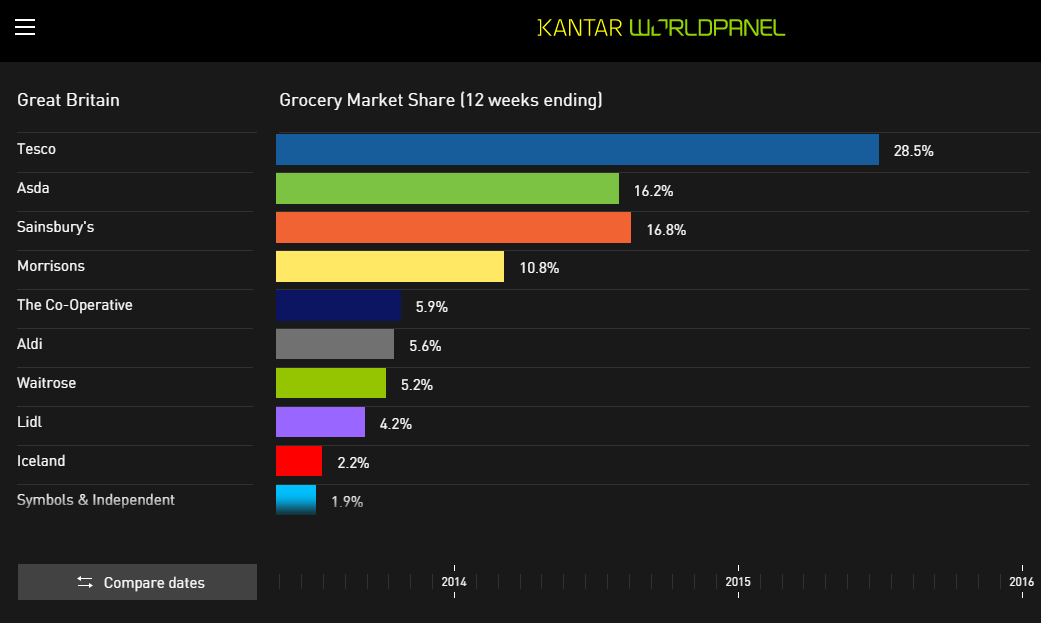