The latest grocery share figures from Kantar Worldpanel, published today for the 12 weeks ending 4 January 2015, show that increased consumer spending over Christmas helped the grocery market grow at its fastest rate since August 2014.

Fraser McKevitt, head of retail and consumer insight at Kantar Worldpanel, explains: “Shoppers chose to buy a little bit more this Christmas compared with last year, a trend which has pushed sales growth up to 0.6%. This is low in historical terms, but a rally for the supermarkets compared with recent months.

“Shoppers were the big winners at Christmas with cheaper grocery prices encouraging them to spend more at the tills. Like-for-like prices have fallen by 0.9% due to lower commodity costs and an ongoing price war which has continued as the large retailers battle for market share.”

Competition between the grocers has been fierce and there is now a gap of just 0.9% sales growth separating the four largest retailers. Such a tightly fought race is unprecedented in records dating back to 1994.

Fraser McKevitt continues: “Sales at Sainsbury’s fell by 0.7% over the latest period, but in a tough market this was the best performance among the big four supermarkets. Sainsbury’s traditionally performs well at Christmas, and its seasonal boost this year means it is now Britain’s second largest grocer for the first time since it lost the position in 2003. Given the seasonal nature of this share increase there is a high likelihood that Asda will retake the number two spot later in the year.”

Tesco’s sales fell 1.2% compared with last year, but this is their best performance since March 2014 and represents a notable improvement. Although revenue declines are slowing, Tesco continues to lose market share, down to 29.1% from 29.6% a year ago. Sales fell by 1.6% at both Asda and Morrisons.

While the bigger supermarkets have continued to find the market tough, Aldi and Lidl have grown by 22.6% and 15.1% to finish the year with market shares of 4.8% and 3.5% respectively. Half of all British households visited at least one of the two retailers over the past 12 weeks. Waitrose also maintained its strong run as sales rose 6.6% to take its market share to 5.1%. 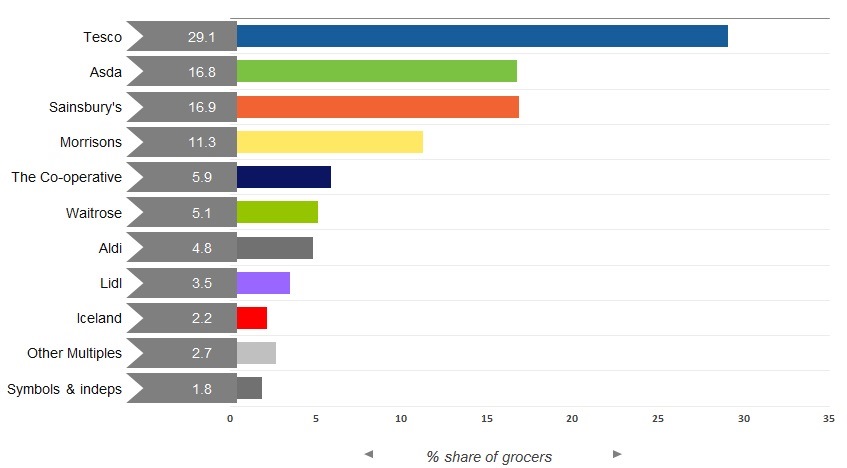 Kantar Worldpanel has launched a new data visualisation tool that allows you to view and analyse Grocery Market Share data online. The latest sales share figures for all of the major grocers can be viewed and compared with historical figures here http://www.kantarworldpanel.com/en/grocery-market-share/