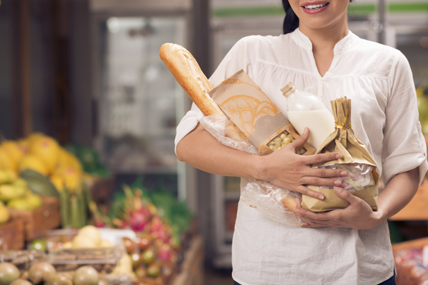 Both Urban & Rural are suffering from the slowdown in growth yet modest recovery came back in short term.

Despite the recent stronger performance of the Vietnam economy - up 6.44% in the second quarter of the year, there is still a warning of more inflation risk, coupled with macro-economic uncertainties which may creep back. This is partly attributed to the increasing price of crude oil and electricity which sees CPI increasing slightly versus a year ago.

In line with the regional downtrend, both Urban 4 key cities (1) & Rural Vietnam have continuously suffered from the deceleration in grocery growth since early 2014 but positive signals are observed in short term. The value growth rate posts a 1.9% increase in Urban and a 7.2% increase in Rural. 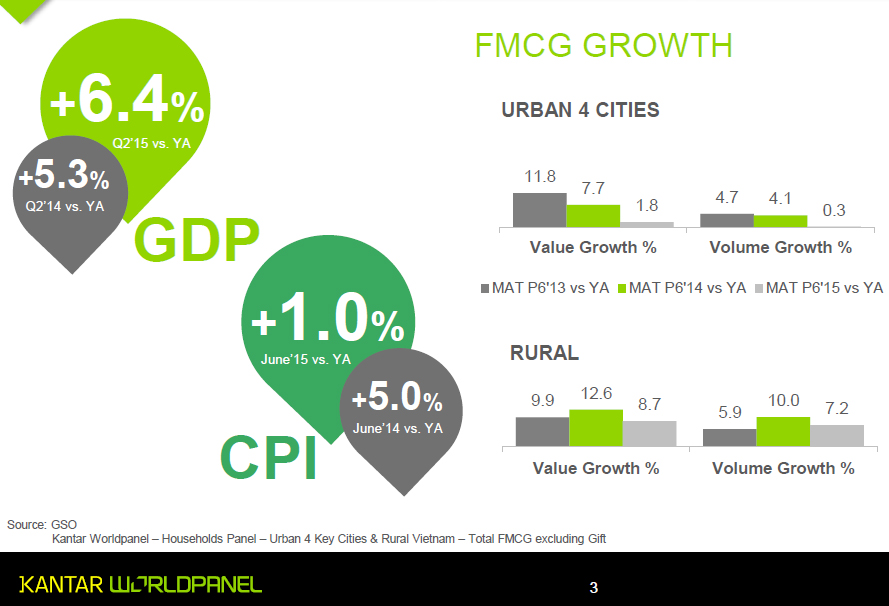 In general, almost sectors have recovered their momentum except Packaged Foods. Beverages continue to perform well within the FMCG market, with value growth up 13% in both urban and rural area. Zoom in within Beverages and we see that Carbonated Soft Drinks in Urban and Instant Coffee in Rural are the fastest-growing categories. They are both doing well at expanding their shopper base. While Carbonated Soft Drinks attracted 78,000 incremental shoppers in urban, Instant Coffee gained ground by recruiting 450,000 additional shoppers in rural. We also witness contrasting performance of Dairy where the market experienced the decline of value at -2% in Urban, driven by the slump in Milk powder. However in Rural Vietnam the Dairy growth posts the strongest growth rate of any sector in both value (+14%) and volume (+13%) versus the same period last year, mainly thanks to the progression of Liquid Milk and Drinking Yogurt.

In terms of retail landscape, with Urban we see Street Shops lag behind the market but Modern Trade still struggling to pick up additional share, not helped by the decrease of Hyper/Supermarkets. However, Specialty stores (2) and Mini-stores come up with the most outstanding performances in Urban. For Rural, Street Shops keeps growing its dominance of the market up to 77% share.

This year, the Kantar Worldpanel’s annual Brand Footprint report continues to reveal the top 10 of the most chosen FMCG manufacturers and the top 10 of the most chosen brands by sectors (Health & Beauty, Homecare, Food and Beverages) in Vietnam. Top three positions are the same last year in both the Urban and Rural ranking. Top rising brands include Dove, Fami, Diana, Milo, Aba, Coca-cola and TH true Milk…

Unilever leads the ranking of the most chosen brand owners in Rural. The global giant FMCG manufacturer has its products chosen more than 388 million times annually in Rural Vietnam and shines brighter than any other brand owner with almost 100% market penetration. Unilever owns the top brands in both Health & Beauty and Home Care with P/S, Omo and Sunlight. In Urban, Unilever earns second place in the ranking, being purchased 57 million times in the past year.

Vinamilk leads the ranking of most chosen brand owners for the third year in Urban. It seems to be the pride of local players. The local dairy leader owns a wide range of food and beverage brands including Vinamilk, Ong Tho, Ngoi Sao Phuong Nam (Southern Star), etc., which were chosen over 70 million times in 2014 by 97% urban households. In Rural, Vinamilk holds third place with its products purchased more than 215 million times by 84% rural households.

Masan wins the second place in Rural and third place in Urban, mostly thanks to its widespread sauce brand – Nam Ngu. Masan also owns other powerful food and beverage brands including Wake-up Café Saigon and Kokomi, which enjoy impressive growth in Rural.

Suntory PepsiCo makes an impressive move, gaining 2 spots, to take 6th position in the Urban ranking – Its products were chosen more than 22 million times last year by 79% of Urban households, reporting a 10% growth in CRP (3), partly thanks to the successful launch of Mountain Dew in late 2013.

David Anjoubault – General Manager of Kantar Worldpanel Vietnam comments: “Both local and international players are expanding into new territories. While local brands sustain better among lower income groups, high earners are heading more towards international brands. This year, the report revealed that focusing on penetration – the number of shoppers choosing your brand – is the key to build big brands. It’s essential for all players to explore new markets and adapt their brands to meet the needs of local cultures. In Vietnam, about 70% of FMCG categories reach less than 50% penetration (on yearly basis), this implies every brand still has plenty of headroom for growth.”

(1) Urban 4 Key Cities includes Ho Chi Minh City, Ha Noi, Da Nang and Can Tho.
(2) Specialty Stores that sells only one line (or over 80%) of merchandise, including milk, liquor, beverage, cosmetic…
(3) Consumer Reach Points measures how many households around the world a brand is reaching and how often they are being purchased, this gives a true representation of shopper choice.