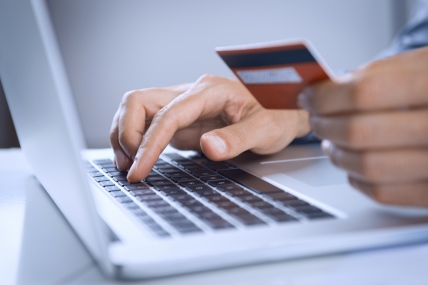 The retailer was boosted by another rise in online shopping which now accounts for a record 39% of all transactions in the sector.

The latest data from Kantar Worldpanel, for the 12 weeks ending 21 December, shows that Amazon took one in every four pounds spent on physical music, games and video in Britain during the run up to Christmas this year. The retailer was boosted by another rise in online shopping which now accounts for a record 39% of all transactions in the sector.

Fiona Keenan, strategic insight director at Kantar Worldpanel, explains: “Amazon performed exceptionally well this Christmas and for the first time ever captured more than a quarter of Britain’s physical entertainment market. Its performance was aided by the increasing popularity of online retail which accounted for 39% of entertainment spending in the run up to Christmas – its highest ever level – growing by 3% year-on-year.

“While consumers' average online spend increased by 6% this Christmas, they still spent less than they did when shopping in physical stores as retailers struggled to get them to shop impulsively online. A third of in-store purchases were bought purely on impulse, creating an additional £119 million for the industry, but when shopping online this proportion halved. Retailers need to identify ways to encourage impulse purchasing in an online environment, particularly as so much of our spend goes through this channel.”

Sector specialist HMV claimed 13.9% of entertainment sales in the final quarter of 2014, up from 13.4% a year before, making it Britain’s third largest retailer behind Amazon and Tesco. These results show an improvement for HMV, and the relaunch of its transactional site in the coming months could help improve its position further. People who shopped at HMV went on to spend £220 million at rival retailers’ online stores this year – money it could have been taking directly had a website been operational. The store benefitted from a resilient physical music market which held its value relative to last year, despite declines across the wider entertainment market. Physical music was helped by the success of British artists who claimed the top five artist albums in the final quarter of the year.

Supermarkets generally found the Christmas period tough. The exception was Tesco, which took 14.7% of sales and maintained its position as the second largest retailer of physical entertainment products. Tesco was particularly successful with the big titles, taking 28% of Frozen sales and 21% of FIFA 15 – the two top gifts in video and games respectively. The other grocers lost share year-on-year with Morrisons slipping back by 0.4 percentage points to 2.1% and Sainsbury’s down 0.6 percentage points to 6.0%. Asda fared worst with its market share falling from 12.9% to 9.5% of sales. It had a particularly strong end to 2013, benefitting from strong sales of GTA V, but was unable to replicate this success in 2014.

Argos increased its market share to 4.4%, performing particularly well in the sales of new PS4 and Xbox One games. It was also a stronger Christmas for smaller retailers – such as Zavvi and WHSmith – and independents which increased their share of the market this year from 9.6% to 11.4%. 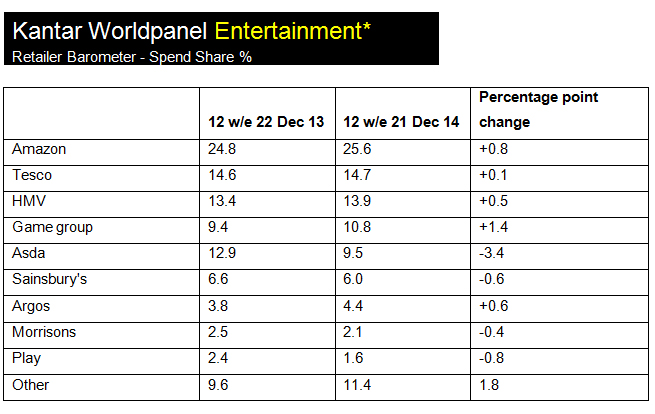 *Please note: Kantar Worldpanel entertainment barometer data has been reworked for 2015 to remove sales of pre-owned music, video and games from our measure of the market. As such, the entertainment barometer figures published from 26 January 2015 are not directly comparable to data previously reported. Please contact Peter Rogers or Alyona Levitin, Camargue, on 0207 636 7366 with any questions.