FMCG market growth hit a new low of 2.9% in China 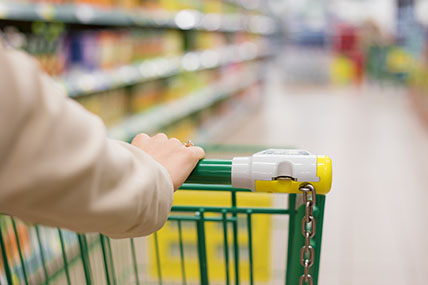 Kantar Worldpanel, the global market leader in consumer panels, reports the spending in fast moving consumer goods (FMCG) in 2016 grew by 2.9% year on year, compared with 3.5% a year earlier, marking its slowest growth in the last decade. Challenged by both a decelerating economy and a rapidly growing ecommerce channel, the growth of modern trade (hypermarkets, supermarkets and convenience stores) slowed to a growth rate of just 0.7% in 2016, well behind the overall trade.

Despite the overall slowdown, there are growth sports in certain city tiers and regions. For example, counties in China managed to grow by 5% year on year and the West region, as a whole, expanded its sales by 6.6% in 2016, suggesting that it may benefit manufactures and retailers to increase the level of support and investment in these areas.

International retailers as a whole experienced a loss of 0.2 share points, down from 12.1% in 2015 to 11.9% in 2016. Despite closing non-performing stores and starting to embrace a smaller store format strategy, Carrefour continued to lose share in 2016. Walmart, however, experienced share recovery from 4.8% in 2015 to 4.9% in 2016 as a result of more focus on China’s hinterland while being more aggressive in O2O deployment and expansion of its Sam’s Club portfolio. In February 2017 Walmart increased its stake of China’s ecommerce giant JD.com to 12.1%. JD.com will serve as the online shopping platform for both Sam’s Club and Walmart stores across China.

In 2016 local Chinese retailers continued to outperform their international counterparts. Sun Art, increased its share from 7.5% to 7.8%, further strengthening its leading position. Yonghui remained the fastest growing player in 2016, thanks to 79 new stores opened in 2016. Driven by its relentless focus on fresh foods, range and efficiency, Yonghui overtook Bailian as the fifth largest retailer in China and is set to challenge Carrefour during 2017. 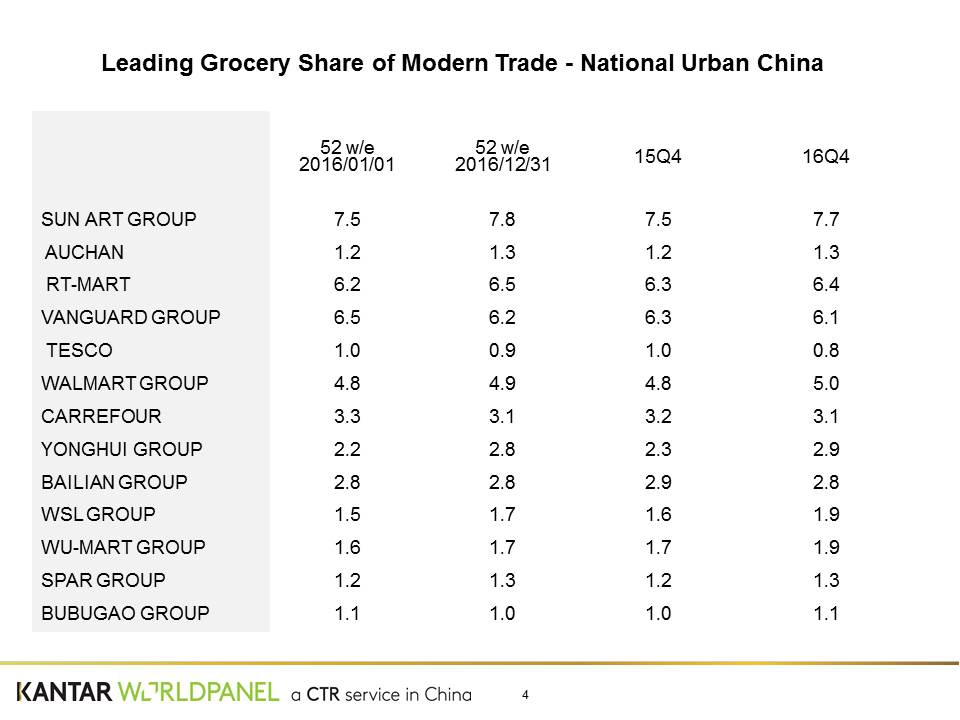 More than half of Chinese families purchased FMCG online

In 2016 53.5% of China urban families purchased FMCG online, 10 percentage points higher than the previous year. Kantar Worldpanel reported a staggering 54% growth in FMCG spend through ecommerce channel year on year, as more and more consumers are moving their weekly shopping trips as well as their individual purchases of certain niche, premium and imported products online. Mobile commerce continues to be the key driver of ecommerce and has helped to drive even stronger ecommerce adoption in lower cities. Kantar Worldpanel data shows that ecommerce already attracted 65.8% of families in key cities and 57% of families in the provincial capital cities. Yet in county level cities and counties, ecommerce penetration growth was even higher at 29.3%, thanks to the expansion of delivery and rapid acceptance of mobile commerce. 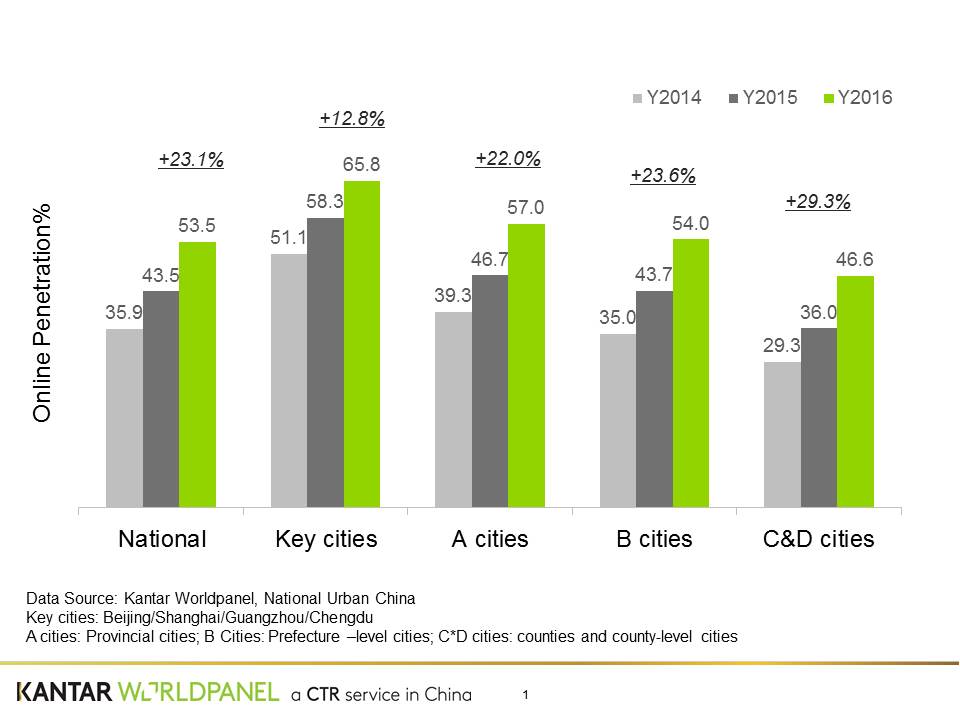 New Retail and OAO (online and offline):
Fast growing ecommerce retailers are still chipping away sales from brick and mortar retailers but, in order to continue to grow in the future, online retailers will need to be integrated with offline retail. According to Jack Ma, the founder of Alibaba, pure play ecommerce player will become obsolete in the coming 10 years. With Alibaba acquiring 32% stake of Sanjiang in November 2016, a regional retailer based in Ningbo, and Walmart’s increased stake in JD.com, we are seeing more and more retailers transforming the traditional online to offline model and are creating more convergence in the shopper experience. Alibaba has already invested in physical retail - including Suning, the largest retailer in China to open up new sales channels and improve its logistics network.

Hema Xiansheng, a revolutionary fresh supermarket format, is experimenting with a new OAO model (online and offline). With its unique focus on its fresh range and in-store dining, the store also delivers to shoppers within a 5km radius through a mobile app, aiming to create a good balance between convenience and efficiency.

Hypermarket format to be reformed
With immense competition from ecommerce players, the hypermarket format is under the biggest growth pressure. In 2016, the big box format, favored by the Chinese shoppers for decades, only grew by 1.3%. However there are still growth opportunities for hypermarket in the lower citer cities, especially in the West, where new stores are still being opened.

Yet the business model of hypermarket requires transformation. It will have to move away from the focus on price and promotions as there is increasing transparency in pricing information in the mobile age. There are opportunities for hypermarket to reduce space and leave more room for ‘in-store experiences’, i.e. education, product demonstration and even more crossover activities with other businesses. In terms of merchandise and display, hypermarkets will have to cater to consumers’ shopping mission and usage needs in order to maximize their traction value.

Shopper centricity key to develop “right to win’
We expect 2017 to remain tough for retail in China, as growth further slows for both brick and mortar stores and ecommerce retailers. Opening new stores will help to drive penetration, however, the higher operating costs means that retailers will have to be selective in how they market to the Chinese shoppers who are more value conscious and digital savvy. To complete effectively, retailers will have to evolve more rapidly to shopper centricity. In a ‘two-speed’ grocery market, growth of categories are increasingly divided, therefore a clear understanding on consumers’ product choices are critical to merchandise and ranging. Besides, more and more retailers will need to operate a distinctive multi-format and multi-brand strategy to differentiate their offers. Deployment of mobile technology and escalation of digital capabilities are essential to build a competitive advantage.