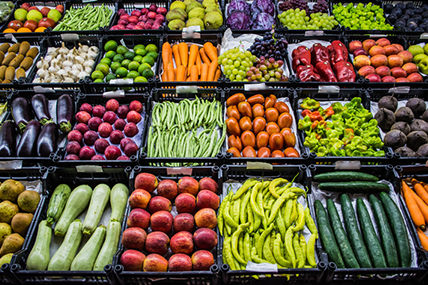 The organic sector best symbolises this need for quality: it is enjoying a very remarkable growth in value (+17.5%).

In the first half of 2017, the French grocery market, including fresh produce, showed a slight increase in value of +0.4%. The evolution of the market in volume, however, showed a slight decrease of -0.3%. Health and Beauty is the most affected category by the decline in volume (-3.2%) followed by staples such as milk and dairy products, alcohol and meat.

Lower consumption by volume in the context of a price and promotions war between retailers, continues to give consumers additional spending power, which they are using to upgrade their consumption.

The organic sector best symbolises this need for quality: it is enjoying a remarkable increase in value (+17.5%) and this is growing year-on-year. This increase cuts across all sections, thanks to a more diversified and accessible offer.

Health through food is prompting increasing numbers of consumers to choose natural, simple products with minimal ingredients, Made-in-France, regional and local products as well as those playing the “Terroir” (traditionally-made) card are doing very well - (“Terroir” own-label brands +6.1% by value).

The phenomenon of upgrading can also be seen in declining markets such as milk, where the big national brands are declining, but smaller players and alternative milk products are growing, including lactose-free, goat and plant-based milks.

Independent retailers and Lidl are showing the best performance

From a retail viewpoint, the environment is also characterised by a change in purchasing behaviours. There is a fragmentation of shopping and disaffection with the big hypermarkets. This is resulting in a movement towards medium-sized retailers as well as specialist and local brands, increased online purchases and, of course, intensified price competition between brands.
In this very particular context, only the distribution groups E.Leclerc, Lidl, Intermarché and Système U have managed to grow their market share by creating preference and stepping-up promotional operations.

E.Leclerc moves into the lead. For the first time, E.Leclerc has taken the lead position in the grocery spend among French consumers. With a 21% market share over a full year, the brand has moved ahead of the Carrefour Group by 0.2 of a percentage point since April 2017. This ranking is the result of a sustained and long-term trend, as E.Leclerc has been increasing its market share for the past seven years. The Carrefour Group still has the largest number of customers (20.7 million households regularly visit a Carrefour Group brand) but E.Leclerc's customer loyalty rate (standing at 37% among repeat customers) has allowed this retailer to move into top position in France.