Game on for TV manufacturers as FIFA World Cup looms 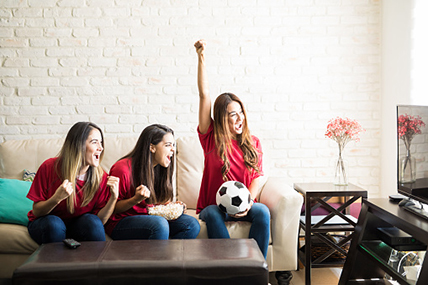 The latest data on the television market from Kantar Worldpanel ComTech Home reveals the scale of the opportunity open to manufacturers ahead of the 2018 FIFA World Cup, as consumers use the football tournament as an excuse to invest in a new device.

Piers Moore, global director at Kantar Worldpanel ComTech, comments: “International events like the World Cup traditionally lead to an uplift in large screen television sales. With one in eight stating that they plan to buy a television in the next 12 months there’s a lot to play for, and manufacturers should be using the run up to Russia 2018 to actively compete for a share of this growth. Those looking for a new device for big events like sports tournaments also tend to sit in a higher spending bracket, meaning manufacturers have a real opportunity to push their more expensive models in the coming months.

“The British market for large screen televisions has quadrupled over five years and in the past six months more than a fifth of all consumers who bought a TV settled on models bigger than 55 inches. Large screen televisions have become a battleground for manufacturers, especially the big three – Samsung, Sony and in particular LG, which is outperforming the competition in Great Britain. We see the same trends across Europe, where some local brands have forced their way into the space – it’s an area they all want to focus on because it guarantees a more premium customer.”

Improvements in technology now mean that big screens are becoming cheaper without a reduction in picture quality.  This is borne out in the performance of OLED and QLED units, which five years ago accounted for less than 1% of television purchases and now have 15% and 3% respectively.

Piers Moore continues, “OLED and QLED technology has reshaped the British TV industry over the past five years.  Their growth is even more stark in the large screen sector, were OLED now accounts for 32% of all purchases over the past half year – in 2013 it was zero. And, while the cost for OLED and QLED units hasn’t quite fallen into the mainstream price range yet, they are slowly becoming more affordable.”

Meanwhile, LED screens accounted for 54% of large screen purchases in the past six months. Piers Moore comments, “4K and ultra HD LED TVs still offer great picture quality and can look stunning, suiting those who want substance over style and vice versa. Samsung in particular consistently resonates with consumers who are looking for a large screen model with great design, whereas those looking for 4K televisions with the best picture tend to opt for Sony.  There’s now a wealth of budget options out there like Hisense or Toshiba, both of which offer a 55 inch television for under £500, but in the run up to the World Cup we’d expect to see savvy shoppers keeping an eye on deals from premium brands like Samsung.”

Kantar Worldpanel ComTech’s data also revealed the differences in how consumers across Europe approach television purchases. The British are significantly ahead of their European counterparts when it comes to prioritising design and style and, alongside the French, they demand the biggest screen size.  The Germans rank energy ratings and efficiency above all else, though this is a low priority in most other European countries.