Gaming back in growth in the UK 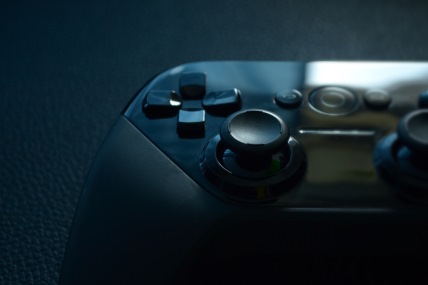 This mixed picture for physical entertainment has resulted in an overall decline of 7% across the combined three markets.

The latest data on the physical entertainment market has revealed positive growth for the gaming sector for the first time since October 2016. Sales of physical games grew by 0.5% year on year, in contrast to music, which fell by 5%, and video, which witnessed a sales decline of 13%.

This mixed picture for physical entertainment in the 12 weeks to 12 March 2017 has resulted in an overall decline of 7% across the combined three markets and a loss of 1.3 million shoppers year on year as digital and streaming services make further inroads with consumers.

James Brown, consumer insight director at Kantar Worldpanel, explains: “A strong slate of new releases helped gaming maintain growth during the first quarter of 2017, with Zelda: Breath of the Wild and Horizon Zero Dawn proving particularly popular. Argos and GAME experienced the biggest gains of any retailer over the past 12 weeks as a result, both achieving their highest first quarter market share in over five years. GAME in particular had great success with games sold alongside consoles as part of a bundle; while sales of single games were flat year on year, bundles saw double digit growth.”

While overall physical music sales have fallen, recent releases suggest a brighter outlook for the coming months. James Brown comments: “Music – which relies heavily on big hits to boost sales – has been strongly affected as the market feels the lack of a platinum-selling album to rival Adele’s 25, which was still selling well this time last year. In fact, her impact was such that taking Adele’s album sales out of the equation would actually see the market in 2% growth year on year. Amazon and Tesco felt the decline most keenly as sales fall by 18% and 20% respectively.

“Although it was released late in the period, Ed Sheeran’s Divide has already had a positive impact for physical music, contributing almost twice as much as its nearest competitor – Rag‘n’Bone Man’s Human. The full force of Ed Sheeran’s star power is likely to be seen in the second quarter of 2017 but retailers should remain conscious that this could end up being only a temporary boost to sales.”

While albums on sale for £15 and under are struggling, more premium offerings experienced double digit growth. Shoppers proved they are willing to pay extra for titles from classic bands including Hardwired... to Self-Destruct by Metallica and Kate Bush’s Before The Dawn. Their higher average price of £20 shows consumers are still opting for traditional physical music ownership when it comes to the releases they deem more special. Premium and multi-CD releases were also particularly popular gifts – items bought as a gift accounted for almost a third of spend on these types of product, up from 19% last year.

Like music, video is feeling the effect of a lack of blockbusters to rival last year’s releases. James Brown continues: “Spectre’s strong performance in 2016 has not been replicated by any titles during the past 12 weeks, with the quarter’s biggest success – Bridget Jones’ Baby – only bringing in around a third as many sales as Spectre during the equivalent period in 2016. Tesco was the stand out retailer in video, winning market share from Amazon and HMV to hold 17.2% of the market.

“Despite an overall decline, one area of the video market experiencing strong growth is among older consumers, accounting for 18% of video sales during the past 12 weeks. This is the highest market share ever recorded by this demographic during the first quarter of the year. Clearly keen to share the movie experience with their loved ones, the majority of shoppers over 60 purchased video to give as a gift or to watch with their partner: Inferno, Bridget Jones’ Baby and Miss Peregrine’s Home for Peculiar Children were among the most popular choices.” 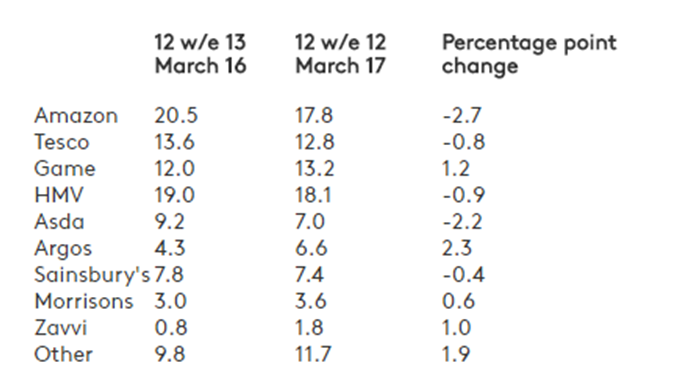