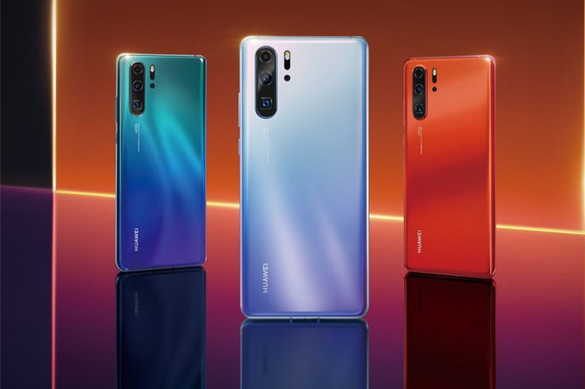 Dominic Sunnebo shares his impressions of the new device and the market context in which it is launching. The Huawei P30 series devices were launched at an event in Paris on 26th March 2019.

In Paris on 26th March, Huawei got back to focussing on what it does best, launching great smartphones. The launch of the P30 and P30 Pro come at a time when Huawei is facing considerable political pressure around the globe – whilst this is almost solely focussed on 5G infrastructure – there is the potential for it to have more damaging implications for the brand more generally. However, it is important not to automatically link political challenges and commercial success. By almost every measure, Huawei has had a fantastic 12 months in the smartphone arena.

In 2018, the predecessor to the P30 series, the P20 series, accounted for 1/3rd of Huawei’s total sales across the big 5 European markets – the P series is crucial to Huawei’s success and is their direct answer to Samsung’s Galaxy S10 and Apple’s iPhone XS.

Huawei’s P series smartphones are synonymous with photography, backed up by a longstanding partnership with Leica - Kantar Worldpanel ComTech data highlights 71% of P20 buyers stated the camera was their #1 purchase driver and camera quality net satisfaction levels are higher than their competitive set at +69%. The P30 looks to build on the excellent reputation the P20 series garnered for photography, with the P30 Pro adding an additional camera to support this mission.

The four cameras on the P30 Pro all have their part to play in the experience; a 40MP main camera lens, a 20MP ultra wide angle lens, a 8MP 5 x optical zoom lens and a new Time of Flight lens (ToF), whose job it is to relay depth information to support Bokeh effect photography. The ToF lens also helps the P30 Pro to utilise augmented reality for measurements such as length/volume/area to an accuracy of 98%+. The P30 forgoes the ToF lens, but specs are similar for the other three lenses, providing a compelling camera setup. The P30 Pro incorporates OIS and AIS, helping to ensure that shaky hands to do not ruin your shots.

The other key area that Huawei has been focussing on is low light photography – there has been some very technical work performed in order to achieve this, forgoing the RGB (red, green, blue) colour model adopted almost universally in photography and introducing yellow to the mix. Yellow is used because it can absorb more light than green. The results speak for themselves, it is clear that the P30 series can ‘see’ far better than the human eye. This allows the P30 Pro to achieve an ISO of 400,000 – up from 102,400 on the P20 Pro. However, it is important to be clear that the P30 is not attempting to replicate what we as humans can see, it is moving into the realm of night vision, something that may trouble professional photographers. The front facing selfie camera also receives an upgrade, jumping from 24MP on the P20 series to 32MP on the P30 series.

As smartphones become increasingly bezel free, Huawei has used colour to great effect with the P30 series to create a point of differentiation. The ‘twilight’ gradient finish was introduced to wide acclaim with the P20 series and this theme is expanded with the P30, with a pearlescent finish across all models, including a unique Amber sunrise version, moving between shades of orange/red/yellow depending on the lighting and viewing angle. Full colours for release available across both the P30 and P30 Pro: Breathing Crystal, Aurora, Amber Sunrise, Pearl White and Black.

As is the seemingly irreversible trend, the screen sizes of both the P30 and P30 Pro take a sizeable jump up, with the P30 moving up to 6.1” (vs. 5.8” P20) and the P30 Pro to 6.47” (up from 6.1” P20 Pro). OLED provides the screen technology for both devices, with a resolution of 2340 x 1080. Screen size (47%) is the #2 most important consideration for consumers after camera, but this doesn’t always imply consumers are after bigger screens. Kantar Worldpanel ComTech data shows owners of all models in P20 competitive set gave a negative score for satisfaction with how the device fits in their hand/pocket.

Huawei have stuck with a 19:5:9 aspect ratio, which is fast becoming the new standard. Sony challenged this with its new Xperia models using a cinematic friendly 21:9 ratio, but they are currently alone in this, and likely to remain so until content is more widely available in this ratio. It is noteworthy that the screen size on the P30 Pro is now larger than that of the Mate20Pro. The Mate series has historically been Huawei’s answer to Samsung’s large screen Note series, but this move signals a retreat from size as a differentiator, instead with the Mate continuing to lead in raw specs, such as screen resolution. It is also expected that the Mate series will lead Huawei’s push into the 5G handset market. Both P30 models opt for a small curved centre notch to house the front camera, making the devices clearly distinguishable from their main competitors, the ‘hole punch’ based Samsung Galaxy S10 series and the more traditional wide notch on the iPhone XS and XR models.

The power behind the P30 series is provided by Huawei’s flagship AI chipset, the Kirin 980, whose power and efficiency credentials have already been proven in the Mate20 series.

Huawei has always been as strong performer on battery life – Kantar Worldpanel ComTech data shows the P20 was the only model out of its competitive set where consumers had positive net satisfaction with battery life (+35%). The P30 series models host sizeable power units; 4300mah on the P30 Pro and 3650mah on the P30 – coupled with the Kirin 980 processor and supported by evidence on the Mate20Pro, these devices should be up there with the best for longevity.

An area Huawei was criticized for with the P20 series was lack of wireless charging- the P30 series addresses this with 15W wireless charging onboard, alongside 40W wired charging, capable of taking the devices from 0-70% in around 30 minutes. Despite including wireless charing capability, Kantar Worldpanel ComTech data shows wireless charging features very low-down consumers lists of considerations– just 1% of consumers state wireless charging to be a key purchase driver for their next smartphone.

With consumers hanging onto their smartphone’s for longer (26 months), eking out growth is becoming a universal challenge. Up until recently, the majority of Huawei’s growth has come from switching consumers from competitors – 80% of P20 customers were new to the brand. However, Huawei now finds itself in a position where it must keep its existing customers loyal and upgrading regularly, whilst competing against the very well received Samsung Galaxy S10 and a slew of Chinese brands like Xiaomi and Oppo looking for a piece of the lucrative European smartphone market.

The Huawei P30 series is undoubtedly a worthy successor to the P20, making progress in areas which matter to consumers; camera, battery life and design. The bold colour choices and finish allow Huawei to differentiate itself and appeal to a youthful audience.

The Smartphone category is mature enough that there are very rarely big evolutionary moves - especially when it comes to updating the most important series a brand sells – that, Huawei has rightly left to its Foldable Mate X.

The one challenge the P30 may have is differentiating itself enough from its older sibling, the Mate20Pro - the line between both series is getting increasingly blurred, with size no longer a differentiator. Unless Huawei can hold the Mate20 prices firm during the P30 launch, consumers could be faced with a somewhat confusing choice.