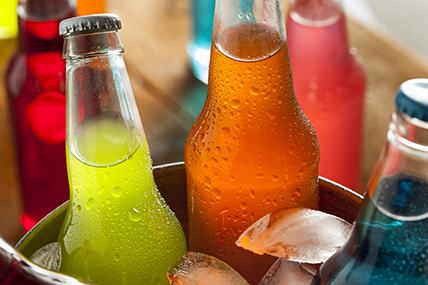 Despite the weak performance of the beverage market, manufacturers are seeking new opportunities through innovation.

The impact of China’s economic slowdown and the ‘new normal’ for Chinese consumers is being felt in the at-home beverage category. For the first time in recent years the total at-home beverage spending of China’s urban households declined (12 months to end of June 2016 vs. previous year).

According to Kantar Worldpanel, total beverage volume also declined for the second year in a row. A decline in frequency is the main reason for this. The frequency of purchase for urban households has declined 7.6%, a decrease of 1.7 times per household. Despite the weak performance of beverage market, the major manufacturers are still seeking the new opportunities, with unremitting flow product innovations launching into the Chinese market.

The past two years has seen rapid development in light-flavour beverages, such as Haizhiyan from President and Shuidongle from Coca-Cola, which has become the new love for consumers. Coca-Cola has been attracting shoppers with its light and fresh tasting beverages. Total light-flavour beverages sales volume soared 44% in last year; and almost two thirds of the growth has come from the new brands.

Chinese shoppers are increasingly paying attention to food health. The traditional high oil, high salt and high sugar foods and tastes are being substituted for lighter alternatives. For instance, the volume of cooking oil per household declined 4% in the past 12 months.

The focus on health is more common among young people in Key and A tier cities, who pursue a more fashionable diet style. This is another reason why light-flavour beverages have boomed in popularity. Among the households who bought a light-flavour beverage in the last year, 60% were young or teenager families. This is 6% higher than total beverage; and 43% come from the Key and A tier cities households, 10% higher than total beverage. 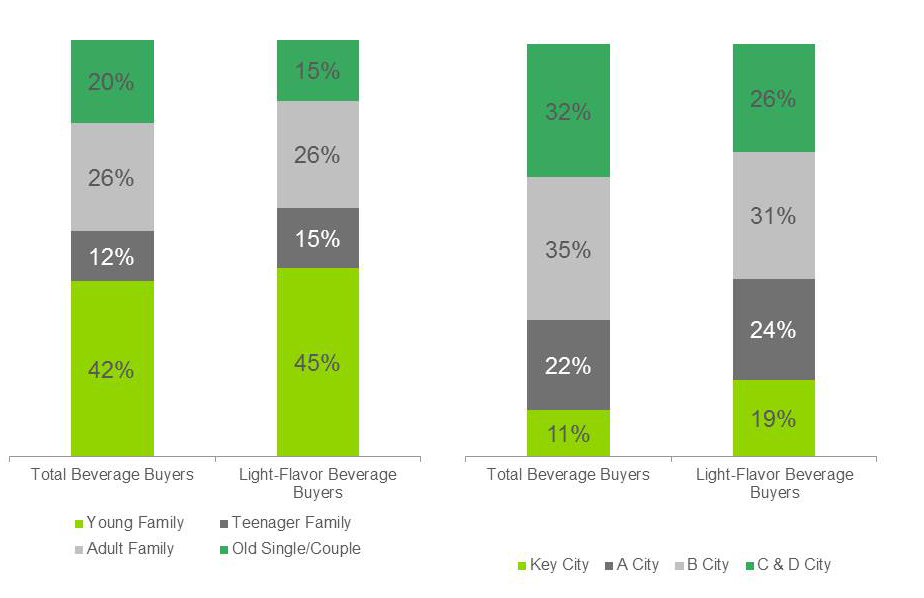 To capitalise on this trend, many manufacturers have begun to cater specifically for the tastes of the younger generations. Mizone Shuiyue, for example, launched in JingDong first and used the online channel to attract young people who favour ecommerce. While Shuiquduo launched in CVS first to attract daily commuters in major cities.

There are now more and more light-flavour beverages being offered to consumers. However, many light-flavour beverages are quite similar in function and flavour. As a result, manufacturers are having to invest in distinctive packaging, such as the label design and the bottle shape. They are also looking to drive greater interaction on social media platforms to motivate young consumers to try new products.

While it is easier for the manufacturers launching new products to recruit those buyers, they also change their preferences quickly. For example, Haizhiyan’s volume increased 36% in the last year, but it still lost 6% of its volume to other new light-flavour beverages. With ever fiercer competition, it will be a huge challenge for manufacturers to enhance consumers’ brand loyalty. The greater challenge is how to attract consumers who do not buy multiple beverage categories and brands.

Light-flavour beverages are not the only hot topic in China’s beverage market. Manufacturers are always seeking possible growth opportunities and coconut water, for instance, is increasingly popular in China. Mango and blueberry juices are still niche flavours, but are grow rapidly. There are also dessert type beverages which provide a heavy and rich taste, and attract consumers who looking for an indulging experience.

Product innovation is one of the most important ways to achieve market growth. Light-flavour beverage manufacturers have successfully used product features to recruit shoppers in Key and A tier cities who care about healthy lifestyles and are willing to experiment with new products.

We forecast that new beverage sub-categories will emerge to meet consumers’ special demands in the future. The beverage market will continue to diversify and there will be more and more cross category innovation. For manufacturers it is not only a challenge, but also a huge opportunity. Maintaining a close eye on product innovation and performance will be the key to staying ahead of the competition.