LG flourishes while Moto struggles in the US 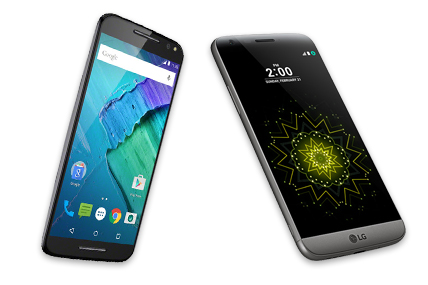 In the shadow of Apple versus Samsung, status of smaller players reflects market trends around prepaid and modular.

As I mentioned in my last blog post, so much attention is paid to the epic tension between Apple and Samsung, we often ignore other players in the market, especially in the US. In the three months ending June 2016, Samsung accounted for 35% of smartphone sales and Apple 32%. Following in third was LG at 14%, with Motorola fourth at 5%.

For LG, this represents a steady upward trend over the past two years, doubling in share from the second quarter of 2014 at 7%. On the other hand, for Motorola, this represents a similar share seen prior to the launch of the original iteration of the Moto X in the 3rd quarter of 2015, and down from 10% from the 1st quarter of 2016. With constant comparisons now being made between the LG G5 and the upcoming Moto Z Droid, let’s look at these two often overlooked players and what success means for them.

The LG G5 was released in the US on April 1, following its introduction at Mobile World Congress as the first “modular” phone to reach the market. These modules, however, require that the battery be removed each time, and the LG Hi-Fi Plus (one of the cooler modules available) will never come to the US. In its first quarter of sales, the LG G5 was the 10th best-selling smartphone in the US at 2.2% and the best-selling LG smartphone in the market at 15.3%. It supplants the LG G4, which had been LG’s top-selling phone since Q3 2015, and before that, the LG G3 (its flagship model released two years ago).

All that being said, LG’s growth in the US has not depended completely on its latest flagship, but also on shifts we’ve seen in the market landscape over the past two years. When we look past the LG G5 and its predecessors, LG’s next best-selling devices are in the mid- and lower range of the market, including the LG K7, LG Leon, and the LG Sunset/Sunrise. These models are not typically available through the Big Four carriers but through smaller, prepaid carriers like MetroPCS, Boost Mobile, and TracFone. Forty-six percent of LG connections are prepaid, the highest of any manufacturer seen in the US. And these other carriers now represent 26% of smartphone connections in the US, up from 20% two years ago. In the six months ending June 2016, LG is the top-selling manufacturer on MetroPCS (40%), Boost (31%) and TracFone (34%).

So, what accounts for Motorola’s lower share this quarter? First, with any manufacturer that announces a new flagship phone, sales will drop in the period proceeding as consumers wait to see if the latest device is worth upgrading to. Second, and this should come as a surprise to no one, a period of transition is expected between ownership under Google to ownership under Lenovo. The Motorola name is no more, replaced by Moto. The latest versions of the Moto G, the G4 and G Plus, were released in developing markets first and only became available to US consumers in July, exclusively through the Moto Maker. The Moto X series has been discontinued.

As for what likely will be the first true test of the new Moto, the launch of the Moto Z Droid, announced at Lenovo Tech World in June as the first truly “modular” phone and exclusive to Verizon, what’s its potential to jump-start Moto growth?

Of current Motorola smartphone owners, 38% intend to change their device in the next year. Sixty-four percent of these consumers are on Verizon. While a majority, 58%, of Motorola smartphone owners intend to stay loyal, this is a far lower rate than Samsung owners (85%) and Apple (92%), but higher than LG owners, of whom only 51% intend to stay loyal. Battery life will be most important to these potential Moto consumers, cited by 89%, a potential boost for their modular design with the promise of 22 hours of extra battery using the offGRID power pack. What remains to be seen is whether these Moto Mods, or the Moto Z Droid, will be enough to revive Motorola’s share.