The French and their eating habits 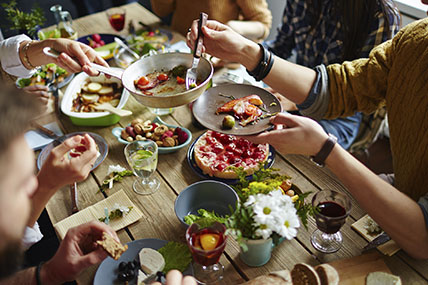 THE FRENCH ARE DEVELOPING A TASTE FOR EATING OUT

The French give a lot of weight to home-cooked meals, with only 25 percent of meals eaten out. In 2016 this changed significantly with a 10 percent increase in the number of breakfasts eaten out. The trend of eating out also influences the composition of this meal, which has evolved to include more practical, at times more gourmet, products.  This trend is strong with Millennials, who eat out more often than their elders. Despite this, the first meal of the day remains the emblem of eating in:  97 percent of the French eat six of their seven breakfasts at home.

THE MEAL STRUCTURE HAS ALTERED

DECREASE IN COLD-CUT AND MEAT CONSUMPTION

The decline in popularity of starters and desserts, as well as the increasing awareness by consumers of health and the impact of their purchases on the environment, have led to a decrease in the consumption of meats and cold cuts. More broadly, all meal-related markets must reinvent themselves like the fruit market has. Suffering losses caused by the decline in desserts, the fruit market has succeeded in boosting itself and today enjoys a rise in consumption at other mealtimes.

These changing patterns represent an opportunity for those manufacturers who can diversify quickly to benefit from emerging consumer trends.