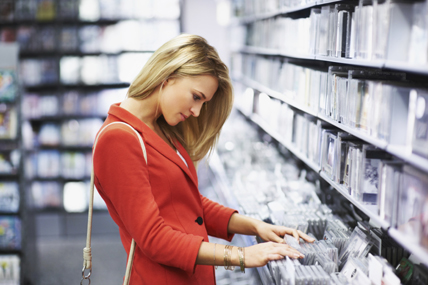 The past quarter saw 68.4% of all physical entertainment sales came through the high street â up from 64.6% last year.

The latest data on the physical entertainment market from Kantar Worldpanel, for the 12 weeks to 27 September 2015, shows a resurgence from the high street retailers, with hmv, GAME and Argos all increasing their year-on-year share. Hmv was the strongest performer, driven by successful multi-buy campaigns across both video and music, and narrowed the gap with online giant Amazon by 2.5 percentage points.

Fiona Keenan, strategic insight director at Kantar Worldpanel, explains: “The past quarter saw 68.4% of all physical entertainment sales came through the high street – up from 64.6% last year and the highest since May 2014, when big film releases such as Frozen drove footfall to stores. This strong performance has been led by the games market in particular, where high street spend grew by 7% in the past quarter."

“While online is losing share at the expense of the high street, the convenience factor is still incredibly appealing to consumers who are simplifying the process further by opting to shop directly through their smartphones. Mobile purchases accounted for almost 10% of online physical entertainment sales this quarter, up 23% on this time last year. With over 37 million people owning a smartphone, this is a significant opportunity for retailers to tap into.”

As Black Friday approaches, it is likely that online retailers will pull back this lost share. Fiona Keenan continues: “The week of deals leading up to Black Friday is typically the biggest of the year for both video and games, and given Amazon’s significant focus on the campaign we’d expect it to come out on top again. But while sales figures resulting from the campaign are impressive, past offers have appealed to shoppers that already buy these types of products, rather than enticing new shoppers into the market and really driving incremental spend.”

While games had a strong effect on the high street market, the overall sector declined by 8% in the past quarter, though this is largely down to spike in sales caused by the launch of Destiny last year. Removing Destiny’s sales from the market would leave games with a like-for-like growth of 14%, meaning the rest of the market is performing well. With blockbuster titles such as Fallout 4 and Star Wars: Battlefront still to come this year, there could be better results for the market next quarter.

Fiona Keenan comments: “This quarter’s biggest title has been EA Sports’ FIFA 16, despite only being released towards the end of September. Tesco and GAME were the big winners with the game, taking over 50% of the opening weekend’s sales between them. GAME continues to perform well across sales of fourth generation console games and has maintained its strong performance in 2015, keeping its share of the games market above 30%.”

Music was the strongest performing among the physical entertainment markets this quarter, with room for further improvement as the Christmas period approaches – particularly with Adele’s latest album, 25, set for release in November. A fall in sales of 4% is in contrast to larger declines in the wider entertainment market and suggests that physical music can still sit alongside the growing streaming industry, particularly benefitting from easier gifting options.