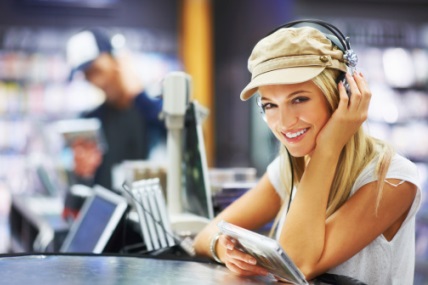 The latest data from Kantar Worldpanel, for the 12 weeks ending 15 March, shows HMV returning to first place among music retailers thanks to a 12% year-on-year increase in physical music sales valued at £9.8 million. British artists are guiding the resurgence, occupying eight of the top 10 album spots and led by BRIT winners Sam Smith and Ed Sheeran, who had the two biggest selling albums.

Fiona Keenan, strategic insight director at Kantar Worldpanel, explains: “HMV has benefited the most from the growth of physical music, returning to the number one retailer position in the first quarter of 2015 and moving ahead of Amazon in physical music sales for the first time since September 2013.

“HMV has been successful in attracting shoppers in store that want to browse its extensive range of products before deciding what to buy, which historically was a real area of strength for the high street specialist. Spend from consumers browsing for music products in HMV has grown by almost 50% compared to this time last year, helping to boost the retailer’s share of total browsed spend in the market to 43.4%, making it the standout player. Pre-administration, HMV’s share of browsing purchases was regularly over 50%, so this recent resurgence is a positive sign for the retailer’s future as it faces increased competition from the online market.”

All of the supermarkets have lost share in the entertainment market compared with this time last year, largely due to losses in video game sales. The biggest title of this quarter across physical entertainment was Grand Theft Auto V (GTA V) for PlayStation 4 and Xbox One. While the grocers had taken the majority of sales for GTA V on the PlayStation 3 and Xbox 360, (53.3%), they only had a third of sales on the newest machines as customers opted instead for specialist retailers.

The physical entertainment market as a whole has fallen 3.3%, with 1.4 million fewer shoppers in the market year-on-year, though higher average prices and more frequent purchasing have offset some of these losses. This rate of decline has slowed since 2014, when the final two quarters of the year saw the value of the market drop by 13.1% and 4.7%.

Among the major retailers Amazon had the strongest sales growth, up by 19% year-on-year. At 23.1%, this is its largest ever first-quarter share, though is still lower than the end of last year. Amazon has increased sales in all physical entertainment markets despite the total games and video sectors being in decline, and while it has not attracted more shoppers, existing shoppers are on average spending £27 per quarter, compared with £22.51 last year.

The ongoing competition between Amazon and HMV has left the two tied for market share in the video sector. While HMV tends to perform well in the first quarter due to its popular sales, the emphasis on promotions at this time of year has declined. The start of 2015 saw only 36% of titles sold on offer, down from over 51% two years ago. Amazon has taken this drop in in-store activity as an opportunity to grow, increasing spend through increased shopper loyalty and spend taken from other major retailers.