US Smartwatch Market Not Ready for Prime Time Yet 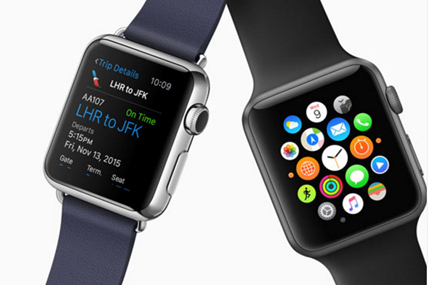 Ninety-Two Percent of Those Intending to Purchase Associate Apple with the Category.

The wearables market is still in its infancy, with only 3% of the U.S. population age 16 and up owning a smartwatch or a smartband according to the latest numbers released by Kantar Worldpanel ComTech. The figures are based on a survey conducted in late August among eleven thousand consumers. Despite the numbers, manufacturers, ecosystem owners, and developers all see significant opportunities ahead. 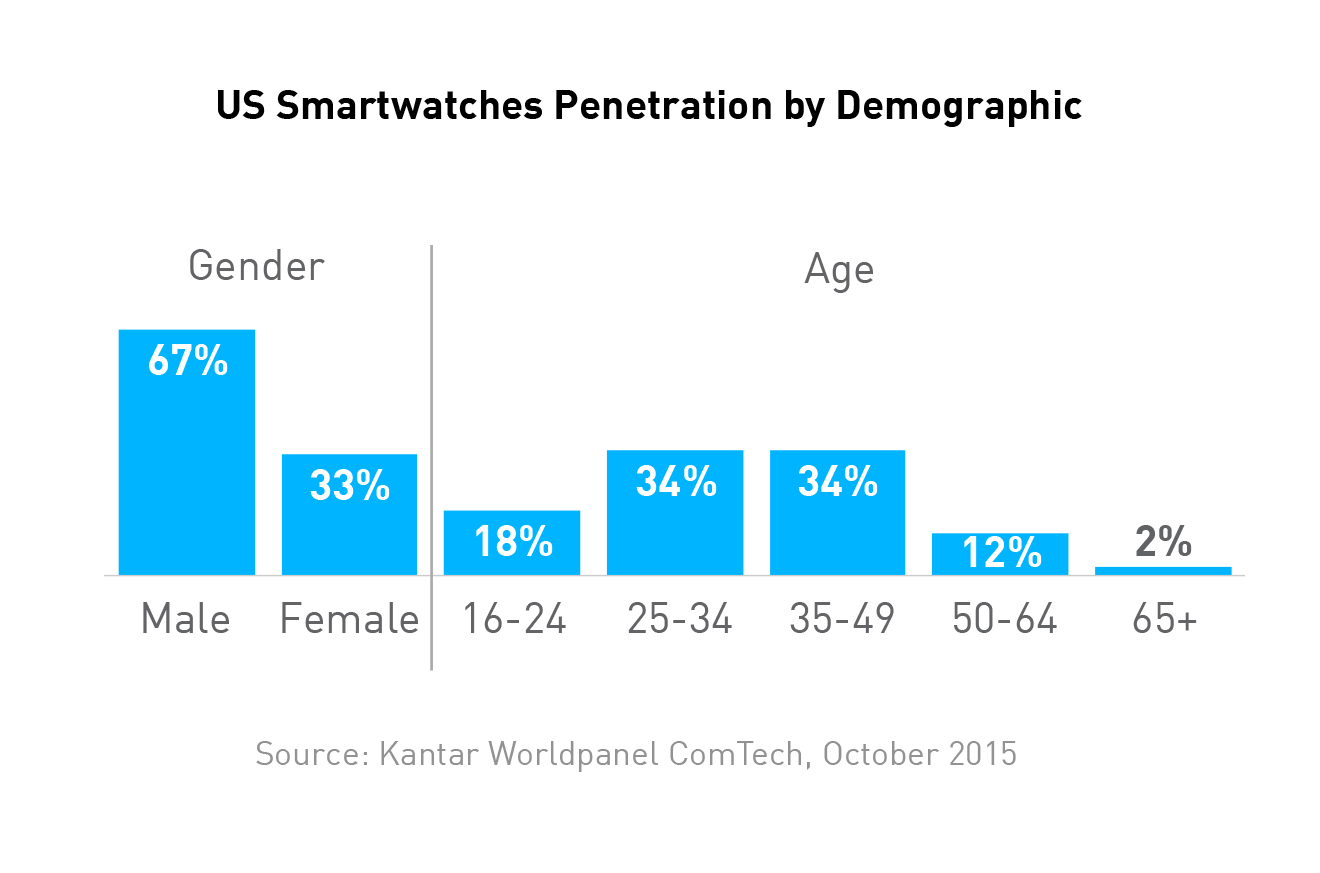 Smartwatches have been on the market for several years. The Pebble Smartwatch debuted in 2012, establishing the category as it is known today. Yet, only 1% of the current smartwatches now in use in the U.S. were purchased in 2013, and 14% were bought in 2014.

Smartwatch ownership follows the classic early adopter profile – more than two-thirds of smartwatch early adopters are male, and one out of three are between the ages of 25 and 34. Vendors like Apple use greater attention to design and personalization to appeal to non-tech lovers. The results of those efforts have not yet completely materialized.

“Looking at where smartwatches have been purchased, the channels preferred by buyers have more in common with other consumer electronics goods than with jewelry,” said Carolina Milanesi, chief of research at Kantar Worldpanel ComTech. “Thirty-three percent of smartwatch buyers got them online, 17% bought them from a consumer electronics store, and 11% of owners received their smartwatch as a gift.”

Among panelists who knew what a smartwatch or smartband was, 92% connected Apple to the category, far more than any other brand. This was followed by Fitbit in second place with 47%, with Google (34%) edging out Samsung (33%) for third place.

“Considering the poor job vendors have done thus far in defining the smartwatch category it is surprising that 52% of those interviewed were able to identify what these devices are: something you wear like a watch, and that let you runs apps,” Milanesi said.

Smartwatch rejecters not intending to buy in the next twelve months are equally divided between men and women, but tend to be older, with 29% of them between the ages of 50 and 64. Device cost is the most frequent reason given by these “non-intenders” (41%), with the second most common reason given being that their phone already does everything they need (33%). 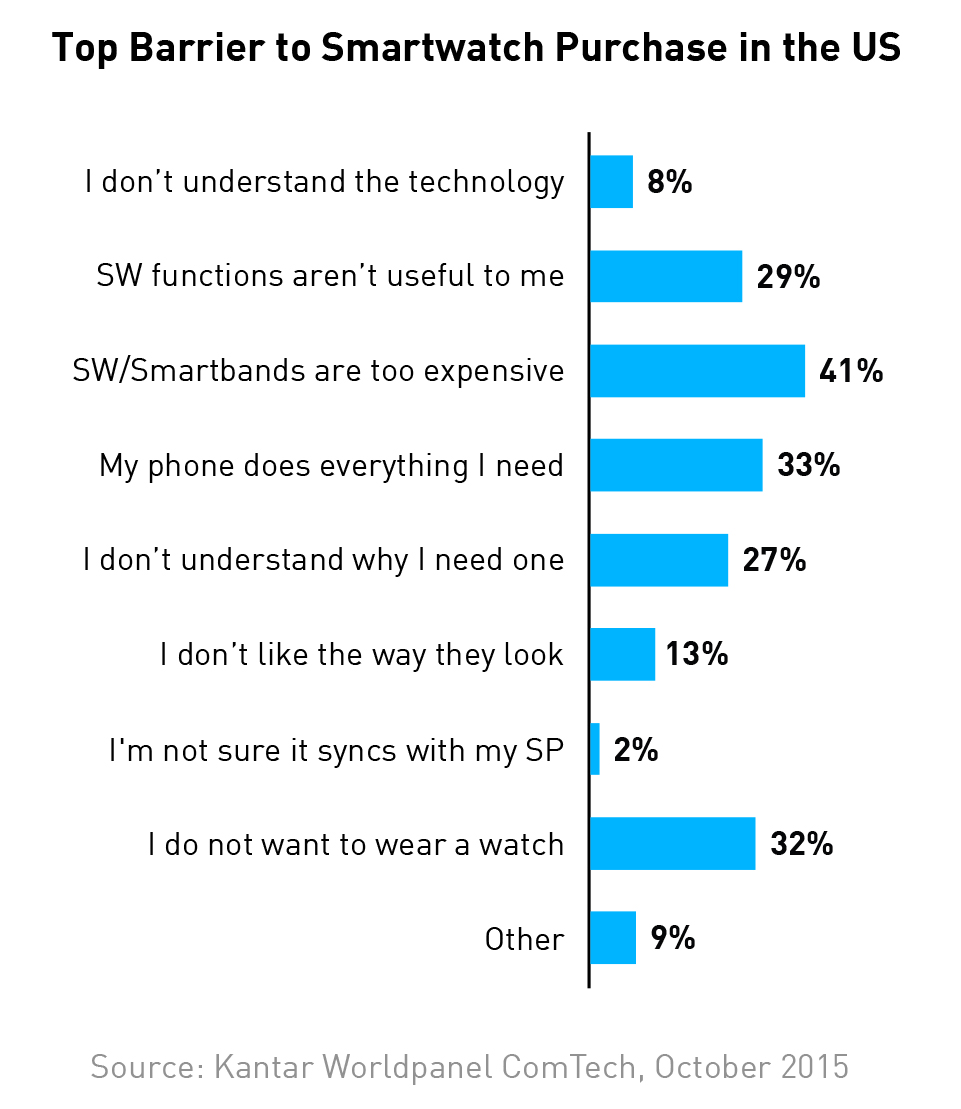 Lack of knowledge does not appear to play a big role in rejecting these gadgets, as only 8% cite not understanding the technology as a reason. When digging a little deeper, most consumers do not actually understand the advantage of having a smartwatch (52%) versus not understanding what they do or how they operate.

It is not a surprise that price and lack of clear use case were the main barrier to purchase. “With wearables, the purchase decision will be greatly impacted by the absence of the kind of subsidy people have become accustomed to with smartwatches. Smartphone buyers have been protected from the actual cost of their device, but they will see the true cost of wearables from the outset.” concluded Milanesi.