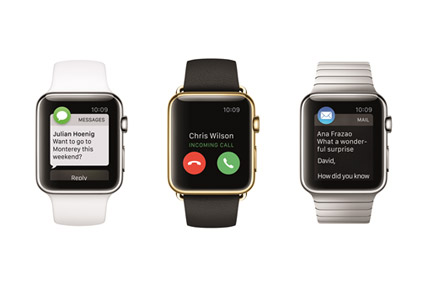 A long battery life was at the top of the list of important smartwatch attributes for 78% of British consumers.

As we prepare to record pre-orders on Friday, April 10, everyone is wondering if the Apple Watch will fulfill consumer needs and wants for smartwatches. Based on my personal experience with Apple Watch, my answer is YES.

We surveyed consumers in the UK and France earlier in the year, and there were some key and clear data points around what they are looking for in smartwatches and smartbands.

53%t of French consumers and 47% of British consumers cited notifications as the most important function of wearables. Apple Watch does not necessarily offer new notifications, but it finesses the way you can view and interact with them. I used the Pebble as my main wearable for almost a year and a half, and I tested other smartwatches. For me, notifications are a way to control my addiction to emails, texts, social, etc. They are a way to break the “no tech at the dinner table” rule, and feel in control without getting sucked into a device.

My main frustration with previous devices was that to action even the simplest notification I had to use voice (my accent is no favorite of Google Now, S Voice or Siri) or reach for the phone. With Apple Watch I now have options. I can choose between Digital Touch for the people I am close to, or the prepopulated answers. The more I use it, the more those answers will be tailored to me and my style.

Health and fitness mattered to 58% of French consumers and 42% of British. While I understood Apple was offering the option to track overall daily activity and workouts, I didn’t fully appreciate how different this approach is compared to what we have seen so far with other devices. I think of the activity app as the equivalent of Michelle Obama’s “Let’s Move” campaign. It is about encouraging users to be conscious of how much time we spend sitting at our desks, and do something that does not require a full-blown workout. The workout app appears to offer everything that a serious fitness enthusiast might be interested in, and with different workout options it widens the scope away from just measuring steps. It was interesting to notice how quickly I got into wanting to achieve my daily activity goals. We’ll see if the excitement will last!

A long battery life was at the top of the list of important smartwatch attributes for 78% of British consumers. At the Apple Watch launch, there was much talk about how the Cupertino-designed wearable needed to be recharged daily. My experience with what I think is a normal activity – fitness monitoring, notifications, playing around with settings, sending messages, and limited voice calls – has been that one full charge would last just over a day. That said, it’s important to point out how quickly the Apple Watch re-charges. It took less than 50 minutes to charge from 20% to 84%. I use it as my alarm clock, as I did with the Pebble, so I wear the Apple Watch at night. I tend to charge it either before I go to bed, while I’m either reading or watching TV/tablet, or first thing in the morning as I get ready. Both options get the job done and do not impact my activity tracking. I believe users will find what works best for them. It was nice to see the charging cable is long enough to place your watch comfortably on a nightstand or desk. With other wearables, I noticed the cable was about the same length as what you might get with a phone.

Premium Design / Feel were the most important attributes for 51% of British consumers. Apple definitely put a lot of effort in the actual design of the watch and the UI. Apple Watch looks elegant and very close to a traditional watch. The digital crown makes it really easy for non-tech consumers to see what Apple Watch is… a watch. With the exception of the Samsung Gear S, this is the first smartwatch that fits well around my wrist, with both the Milanese loop and the sport strap.

The ability to customize the face certainly adds to the design, and I’m sure more options will be released from Apple and third parties. In the same way I select the background and most important apps for my phone’s home screen, I want to be able to pick my watch face and the information, or complications as I learned they are called, displayed on it. Force touch is another feature that, once you conquer your fear of actually applying force to the screen, is an elegant way to access more information when you need it. The digital crown took a little more getting used to, simply because the winding gesture is different than that of a regular watch, much more sensitive. Think of it more like the wheel on top of a PC mouse.

Apple Watch has the opportunity to appeal to a broader segment of consumers, thanks to its looks. While there is no doubt the watch is “smart,” the design might catch the attention of consumers who are in the market to buy a mechanical watch.

I discussed price when Apple Watch was first announced. Wearables are certainly not for everybody, and they remain a “nice to have” versus a “must have.” The Apple Watch is no exception. Most consumers we interviewed in France and Great Britain did not want to spend more than $160 (72%) and $220 (72%), respectively. Furthermore, of the consumers who are not considering buying a smartwatch, 30% in both surveyed countries said the reason was that they felt they were too expensive.

If we look at the entry cost of $349 for the Apple Watch Sport, Apple is aligned with most competitors and is about $200 higher than the competition when we consider the Apple Watch family - that includes 20 models. While some of the higher price clearly is a brand premium, there are higher materials costs for Apple Watch compared to most other options we have seen in the market thus far.

The feeling of the stainless steel model with Milanese loop I have been wearing is certainly that of a high-end quality watch. Ultimately, we need to understand that, while Apple might be interested in capturing a wider segment of a market over time, for now, as it is dipping its toe into wearables, Apple is most interested in consumers who own multiple Apple devices and are highly engaged with the iOS ecosystem – plus engaged iPhone owners who have not deepened their reliance on the Apple ecosystem through multiple devices.

A number of consumers are not planning to buy a smartwatch, reasoning that a phone does all that is needed (18% in France and 22% in Great Britain). While it is certainly true that most of what Apple Watch does can be done by the iPhone or another smartphone, the difference lies in the simplicity, richness, and or accuracy that the watch actually adds to the mix. This is certainly not something everybody will be prepared to pay for, but that enough people will find compelling.

Lastly, there is the matter of understanding what Apple Watch can do for you. Wearables detractors say they don’t understand the technology (13% of French consumers and 24% of British consumers.) Apple Watch is not difficult to understand or navigate. As with the iPhone, the UI is intuitive enough to get most people to engage quickly.

In my opinion, there is no learning curve with Apple Watch; there is a discovery curve. Users will find different ways to perform the same tasks and the Apple Watch will learn more about the user and adapt to them as time goes by, thus refining and enriching the user experience.