Impact of COVID-19 Outbreak on FMCG Market During CNY 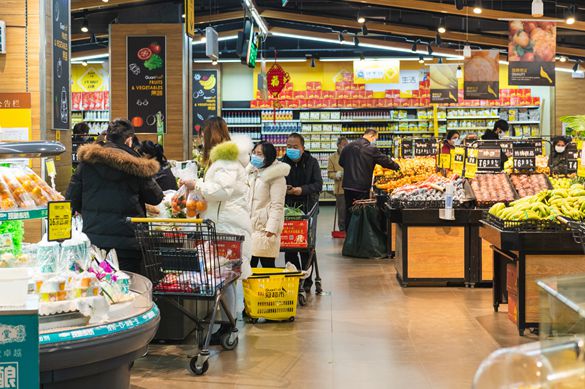 It’s been nearly a month since the outbreak of Novel Coronavirus (named by WHO as COVID-19) in China. The epidemic is significantly impacting the economy of China as well as the rest of the world. Since the outbreak took place just behind the celebration of the lunar new year in China, brands and retailers expect severe challenges to the sales of Fast Moving Consumer Goods (FMCG) in this most celebrated festive season in China.

In an earlier report analysing the impact to the FMCG market by SARS last week, Kantar Worldpanel already shared key findings based on historical data from 17 years ago. However, as many analysts suggested, the scale and scope of the Chinese economy in 2003 was substantially behind the level in 2020, and therefore the impact of COVID-19 is believed to be much stronger than the impact of SARS.   This impact will definitely be felt by the FMCG market but not all categories and retailers will see a negative impact.

Chinese New Year (CNY) is one of the most important sales peaks for many brands and retailers. The date of Chinese New Year is not exactly the same every year so we have realigned the reporting period based on lunar calendar to make the data comparable. Since Chinese New Year in 2019 was one week later than 2020, we re-adjusted the data period by week and after comparing consumers purchases two weeks before CNY and two weeks after Chinese New Year, we are now in a position to assess the impact.

The total sales two weeks before CNY grew by 15%, substantially higher than the full year FMCG growth rate of 5.3% in 2019. However, after the Wuhan lockdown was announced on January 23rd, panic started to gather. As the Chinese government appealed to everyone to avoid family and friends gatherings and all social activities (including the suspension of cinemas and entertainment facilities across major cities), the sales of the CNY week dropped by 24% on a like-for-like basis and then by 41% in the subsequent week, as people were asked to stay at home. Based on our preliminary estimation, total FMCG sales went down by 12% over the 4 weeks period compared with 2019. 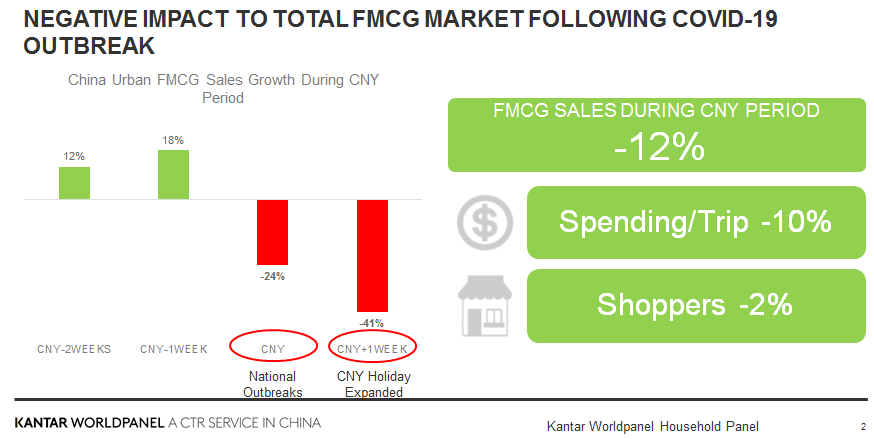 The drop of FMCG market was partly due to the decline of shoppers by 2%, but more severely impacted by the drop of spend per trip by 10% as shoppers reduced number of categories they purchased. There are two main reasons behind the changes: consumers reduced their new year celebration gathering, hence there was a lower demand of categories that were normally purchased for CNY gifts. In the meantime, consumers had to relocate their budget to critical health and protective categories, i.e. face masks, disinfectant products and fresh foods.

2.   Mixed Performance by Categories Amid the Epidemic

The sharp drop of consumer spend is a bad news to many categories, especially those relying heavily on CNY sales. Both alcoholic and non-alcoholic drinks saw their sales fall by more than 40% during the 2 weeks after CNY as most consumers cancelled their family gathering. In China, top choices for gifting occasions include liquid milk, confectionary and biscuits, all of which faced considerable challenges during CNY this year. On the contrary, categories like instant noodles, frozen foods and quick soup witnessed soaring demand as consumers flocked to supermarkets to stock up and spend more time cooking at home. Moreover, seasoning products, butter and cheese also enjoyed significant growth as consumers opted to cook more indulgent meals at home.

Non-food categories are typically less seasonal during the CNY period, however some of them were experiencing astonishing growth as anxious shoppers, desperate to protect themselves from infection, have stripped stores of hand sanitisers and disinfectants. Meanwhile, tissues and wipes gained more popularity as they were used for hand cleansing when consumers are out of home. Those categories are expected to maintain their growth momentum even in the post-epidemic era as Chinese consumers continue their sanitising habits.

“When did you wash your hair last time?” this is a top topic on social media during the period. As consumers stayed at home every day, their personal care routine tended to change. The sales of haircare products, including shampoo and conditioner, saw decline and the situation is even worse for colorant and styling products. Due to the fact people were not going out to meet friends or to the office, categories with strong social functions such as make up and fragrance also experienced disappointing sales.

Hypermarkets and Supermarkets all faced severe challenges of reduced footfall during the Covid-19 spread, with penetration dropping by 15% and 12% respectively.   During the festive period, gifting occasions also dropped significantly, with categories relying on nice gift packs for family/friend visits being hit particularly hard. As many consumers cancelled their overseas travel plans, purchases from other countries and duty free also saw a significant drop.

The epidemic did bring more demand to a handful of other retail channels. Small supermarkets, mainly those located in residential communities, reported strong growth during the CNY period, as they were closer to shoppers and stocked essential fresh foods and daily necessities. Ecommerce giant like Alibaba, JD and Pinduoduo, are also adapting their strategy proactively in terms of logistics and home delivery. Moreover, emerging channels riding on the popularity of Wechat enjoyed soaring demand as consumers spent far more time on social media for news and entertainment during this period. 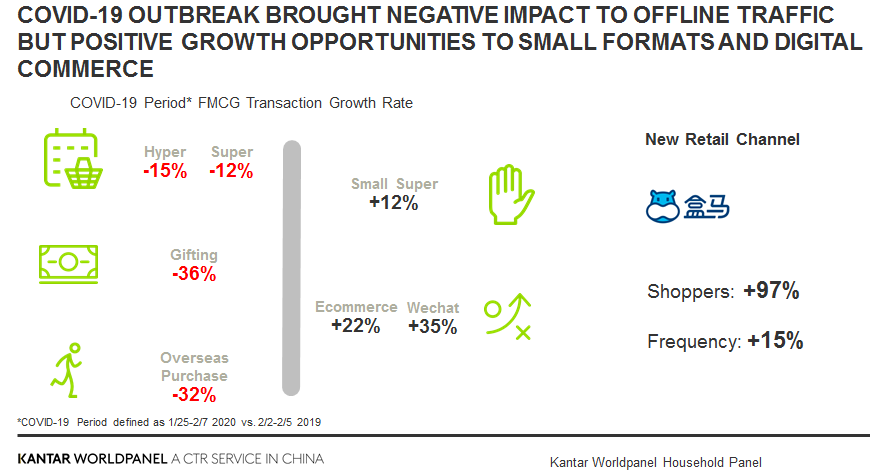 New retail players, led by Hema, recorded stronger growth during CNY period, thanks to more shoppers and more visits as consumers opted to use delivery for their daily foods. With rapid store expansion, Hema almost doubled its footprint compared to CNY in 2019. Meanwhile, it’s the first retailer to accept redundant workers from restaurants and catering services as part-time workers for sorting and delivering merchandise. The move is a win-win solution for both industries to survive through this difficult period. Innovative solutions such as ‘contactless delivery’ was also invented to avoid physical contact between shoppers and delivery workers. Omni-channel penetration with O2O delivery is expected to be more accepted post the crisis.

The battle against COVID-19 is still on and the challenges to FMCG industry is yet to be fully observed. The wide spread epidemic will have a profound impact on FMCG categories in Q1 and possibly in Q2. Kantar Worldpanel will launch a monthly category tracker to help brands and retailers closely monitor the impact. 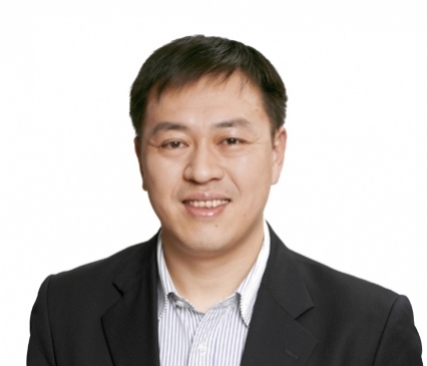