Out-of-home, out of mind? 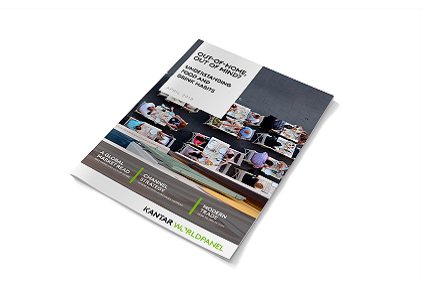 The report analyses data from Kantar Worldpanel consumer panels in Brazil, China, France, Indonesia, Mexico, Portugal, Spain, Thailand and the UK. It also sheds light on contrasting purchase behaviours at a local level, showing a huge potential for OOH consumption in Asian markets such as China, Thailand or Indonesia with 48%, 66% and 63% OOH contribution of total spend respectively, which are bigger than countries in other regions.

OOH consumption happens everywhere. While the hotels, restaurants and cafes (horeca) channel performs strongest in Europe, with 83% of Portuguese OOH spend and 60% of Spanish spend outside the home happening in horeca locations. Modern trade (hypermarkets/ supermarkets, convenience stores/ minimarts) plays an important role in emerging markets in Asia, accounting for 43% of Chinese OOH spend and 46% of Thai spend.

Besides, impulse channels and traditional trade make up a large proportion of OOH spend. In Brazil, 35% of snacking food and non-alcoholic drink purchases away from home happen in impulse channels, whereas 33% of total OOH occasions in Mexico occur in traditional marketplaces, even up to 85% in Indonesia.

As modern trade (hypermarkets, supermarkets and convenience stores) continues to proliferate in developing markets, there has been a knock-on effect for OOH consumption. In Thailand and Mexico, consumption outside the home accounts for more than half the total modern trade spend in snacking food and non-alcoholic drinks (59% and 55% respectively), followed by China (39%) and Indonesia (38%). With 3 out of the top 4 countries being in Asia, this region presents opportunities for adding an OOH strategy to cover total modern spend.

David Anjoubault, General Manager of Kantar Worldpanel Vietnam, commented: “Out of home purchasing in Vietnam is full of potential for growth, much like neighbouring countries such as China and Thailand with whom it shares some similarities in culture, customs and lifestyle. Thanks to continued economic development and a rising disposable income, Vietnamese people, especially the younger generations, are more outgoing and more socialized. Aspirations such as eating and drinking out, travelling, entertainment activities (cinema, bars, clubs, karaoke…) are gaining prominence, which create a lot more Out of home occasions. We also witness the rise of convenience stores which are not only a channel for on-the-go purchases, but also a new space for young Vietnamese to hang out in urban areas. Brands and retailers should understand consumers’ Out of home behaviours in order to seize this growth opportunity.”